Genes are the “master blueprint” that instruct our cells to make unique proteins which in turn build, operate, and repair human tissue. Humans have an estimated 24,000 genes along our 23 matched pairs of chromosomes (46 in all), and “genomics” refers to the field that studies all of them at once.

Genes are passed down from a person's biological parents. They carry information that defines traits such as eye color and height. Genes also play a role in keeping the body's cells healthy.

Even slight changes in a gene on one or both chromosomes can produce a protein that functions abnormally, possibly causing or increasing or decreasing the risk of a disease such as Alzheimer’s.

A key area of research is discovering all that we can about the role of Alzheimer's genetic risks and protective factors. Understanding more about the genetic basis of the disease helps researchers to:

Early-onset forms of AD - representing less than 10 percent of all cases - can be traced consistently to changes, or mutations, in identified genes and typically occur prior to age 65 and as early as age 30.

The three single-gene mutations associated with early-onset Alzheimer’s disease are:

The vast majority of AD cases have no specific identifiable genetic cause but rather small genetic irregularities occurring throughout the genome. These cases are referred to as late-onset AD, with most appearing after the age of 65.

Having a genetic variant of the apolipoprotein E (APOE) gene on chromosome 19 may either increase or decrease a person's risk.  There are three known variants:

Many other risk factor genes besides APOE are continuously being discovered. Using powerful and fast new technologies, researchers working in genomics look for variations, patterns, and interactions among all genes in hundreds of thousands of people. So far, several dozen “regions of interest” have been identified but it gets complicated because gene signaling can be turned “on” or “off” by additional factors, such as environment and lifestyle.

Researchers at the University of Alabama at Birmingham are on the track of a gene - BIN1- that might play a role in the development of Alzheimer's disease.

Common Questions you may have about Alzheimer's 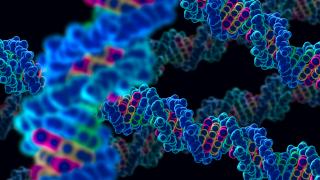 Is Alzheimer’s a Genetic Disease? 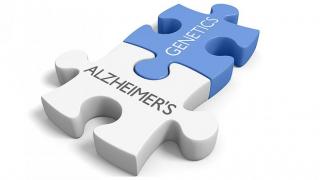 What Is Your Risk?—Heredity and Late-Onset Alzheimer’s Disease 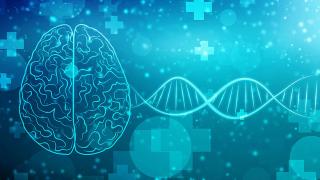 Explore More of Our 360° Research Approach

A biological marker (biomarker) is a measurable substance in an organism whose presence is indicative of some phenomenon such as disease or infection. Biomarkers can help doctors and scientists diagnose diseases and health conditions, find health risks in a person, monitor responses to treatment, and see how a person's disease or health condition changes over time.

Tau is a small protein with a short name but a large reputation because of its association with multiple brain diseases, including Alzheimer’s disease (AD). The tau protein is predominantly found in brain cells (neurons).

There are many versions of amyloid protein in the human body, and most serve a useful role. One of the hallmarks of Alzheimer’s disease (AD) is the accumulation of amyloid plaques (abnormally configured proteins) between nerve cells (neurons) in the brain.

Blood and the Brain in Dementia

Blood and the Brain in Dementia

Scientists are interested in developing a screening tool for Alzheimer’s disease (AD) in blood. A simple blood draw is much less invasive than a spinal tap and may prove more cost effective. Developing blood biomarkers that accurately depict brain changes has proven challenging, as levels of AD hallmark proteins in the blood are low, but there are some very recent promising results observing tau and the ratio of Aβ42 and Aβ40.

One theory about Alzheimer’s disease (AD) is that it may be triggered, in part, by a breakdown in the brain’s immune system.

Biology of APO E and Lipids

Biology of APO E and Lipids

Alzheimer's disease (AD). Its primary function is to regulate a class of proteins involved in the metabolism of fats (lipids) in the body. However, APOE has several common variants (or "alleles") whose effects vary.

The human brain has an estimated 100 billion neurons. Extending from each of them is a long fiber, known as an “axon,” which can run several feet. Each axon forms a connection, known as a “synapse” with another neuron, creating a circuit over which brain signals travel. In Alzheimer’s disease (AD), individual neurons die and do not regenerate; while others have brains that are more are resilient and respond to meet changing demands.

Years of innovative and dedicated research have paid off with the discovery of numerous factors contributing to Alzheimer’s disease (AD) pathology. With a disease as complex as this one, it’s very helpful to find multiple points where it may be possible to slow or halt its progress.