Geroscience Can Help Cure Diseases of Mind and Sight 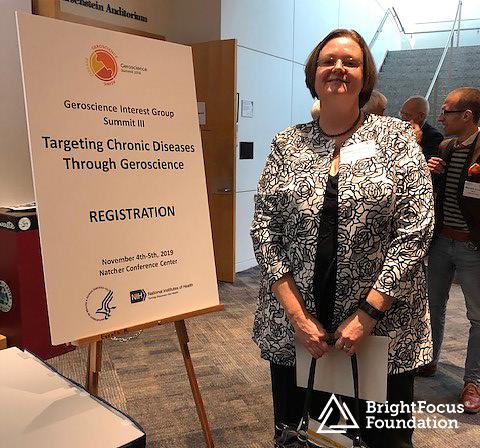 While it’s not a new field, geroscience is a field that’s becoming ever more relevant.  It seeks to understand, at the molecular and cellular level, the relationship between aging and chronic diseases and conditions that diminish quality of life in later years.

As it happens, all the diseases that BrightFocus research grants are focused on –  Alzheimer’s disease, macular degeneration, and glaucoma – have age as their greatest risk factor.  By 2050, approximately one-quarter of the world’s population will be over 60 years of age, and subject to growing risk.

BrightFocus VP of Scientific Affairs Diane Bovenkamp, PhD, was invited to participate and take a leadership role in a recent Geroscience Summit organized by the National Institutes of Health.

In this Q&A, she explains what geroscience is and how the field may be a huge ally in the search for treatments and cures for Alzheimer’s, macular degeneration, and glaucoma.

[Read a separate article about the 2019 Geroscience Summit.]

Q. What is “geroscience?”

Diane Bovenkamp. The term ‘geroscience’ might seem like a new term, but this type of research has been around for decades. It is the study of how aging affects our bodies and biological processes, and its intersection with health and disease. Scientists look at aging’s effect from the tiniest molecule within our cells all the way through to understanding the long-term effects of external environmental factors.
Q.  How does geroscience relate to the diseases BrightFocus is concerned about:  Alzheimer’s disease (AD), age-related macular degeneration (AMD), and glaucoma?

Diane Bovenkamp.  Age is the number one risk factor for all three diseases. Theoretically, if the potentially health-changing effects of age can be delayed or directed down a different biochemical or biological path, then the risk for developing disease may be reduced. A number of systems affected by age, like the immune system, metabolism, sleep deprivation, cell regeneration, etc, may also be disrupted or changed in glaucoma, AMD, and AD and related dementias.

Q.  Do geroscientists bring special skills or knowledge to the table that are helpful in understanding and curing these diseases?

Diane Bovenkamp. These days, geroscientists, gerontologists, geriatricians and other related professionals have received a broad education and training in multiple science and medicine disciplines related to aging. However, any scientist can bring their talents to bear on a geroscience-focused project.

Today many researchers are focused on understanding and finding treatments for a single disease, and that will continue to bring innovative findings to light. One can consider geroscientists to be looking more ‘upstream,’ prior to the development of disease, sorting out what’s healthy or non-healthy aging, and looking for ways to combat a person’s general risk for developing a number of age-related diseases.

Q.  Has BrightFocus ever awarded any grants in the area of geroscience?

Diane Bovenkamp.  Since aging is the major risk factor for all three of the diseases BrightFocus concentrates on (AD, AMD, and glaucoma), most of our projects touch tangentially on the topic. I can highlight some of these innovative projects.

Within our Alzheimer’s Disease Research program:

In glaucoma, examples include:


And in the field of AMD:


Q.  Are any of these projects uncovering common links behind neurodegeneration?

Diane Bovenkamp.  Some of the innovative projects that BrightFocus has funded, and will continue to fund, include interdisciplinary projects looking at the common features of neurodegeneration of the eye and brain.  In addition, we are investing in events that bring eye and vision scientists together to share information and jumpstart potential collaboration.

For example, BrightFocus spotted a need to coax scientists into thinking outside of the one disease-focus and explore whether collaboration on common pathways could bring forth innovative ideas to tackle preventions and treatments.  So in 2017 and 2019, we convened and led a pre-meeting symposium of the Alzheimer’s Disease/Parkinson’s Disease international scientific conference called “Common Features of Neurodegenerative Disease: Exploring the Brain-Eye Connection and Beyond.”

BrightFocus’ tagline – “Cure in Mind. Cure in Sight.” – represents our commitment to eradicating diseases of mind and sight.  In essence, tackling challenges like that from a disease-agnostic, but aging-centric, point of view is what geroscience is attempting to do, and we are excited to partner in this interest area.

Q. What was your role in the recent NIH Geroscience Summit?

Diane Bovenkamp.  I represented BrightFocus as one of dozens of nonprofit funding organizations and scientific society groups dedicated to supporting scientists and the research they do, whether that was focused on one or more diseases, or on aging in general. I explained what BrightFocus does, that we have already funded many aging-related projects, and that there could be potential for common interests with all of the other groups present, as we look to the effects of aging on health and disease as a common theme. I was asked to give a presentation in the summit, as well as participate in the closed-door strategic meeting at its end, where we formulated recommendations.  A summary is expected to be published as a joint white paper in the future.

Q. Will you stay involved?  What’s planned for NIH and BrightFocus in this area?

Diane Bovenkamp.  We look forward to the publication of the strategic priorities  white paper, with suggested avenues for potential collaborations between NIH and the various nonprofit funders and advocacy groups. Even if there isn’t a specific collaboration in mind, it is important that there is increased awareness of common goals, so that we will be prepared should an opportunity come to light.