You’re about to hear a new scientific term, “geroscience.”

Geroscience, as a field, is focused on trying to understand, at the molecular and cellular level, the relationship between aging and most age‐related diseases and conditions that diminish our quality of life.

As many are aware, scientific progress has led to a huge increase in life expectancy – a 30-year gain in the last century alone, from an average of 47 to 77 years.  However, these gains have been accompanied by a rise in the burden of chronic disease and disability in most societies today.  That’s because aging itself is the greatest risk factor for most chronic diseases and conditions that affect older adults, including cardiovascular disease, cancer, and the most prevalent forms of Alzheimer’s disease (AD) and dementia, age-related macular degeneration (AMD), and glaucoma, which remain uncured.

Today, scientists at the National Institutes of Health (NIH) and other research centers in the United States and internationally are tackling this problem through geroscience. Their goal is to increase knowledge and understanding of how aging makes a person more vulnerable to chronic diseases and conditions.

Their approach represents a bit of a change in direction from traditional biomedical research, which has focused primarily on specific diseases such as cancer, diabetes, heart disease, and, more recently, Alzheimer's and related dementias.  We now know that aging affects the onset and progression of all of these diseases and is a common risk factor that is as strong as, or stronger than, genetics, lifestyle, and underlying health.

“Your genes and environment determine which disease you get, but aging determines when you get it,” explained Felipe Sierra, PhD, a geroscientist who heads the Division of Aging Biology at the National Institute of Aging (NIA).

By studying what happens during aging at the genetic, molecular, and cellular levels, geroscientists hope to discover the similarities and differences among these conditions as they relate to aging, then use that knowledge to transform aging by protecting and restoring the health of individuals in later life. The driving hypothesis is that it may be possible to slow the rate of aging and by doing so, to reduce the impact and severity of multiple adult‐onset diseases and loss of resilience.

And BrightFocus hopes to partner with their efforts.

More than anyone, it is Dr. Sierra and Dr. Ronald Kohanski, deputy director of NIA’s Division of Aging Biology, who brought the term “geroscience” into the mainstream. Together, they created the Trans-NIH Geroscience Interest Group (GSIG) to explore the relationships between aging and disease.  Currently scientists in 20 of the 27 national institutes participate.

They also convened the first geroscience summit conferences at NIH in 2013 and 2016.  Recently, as 2019 drew to a close, a third summit was held, Geroscience 2019: Targeting Chronic Diseases Through Geroscience. All three meetings had the overarching goals of promoting discoveries on the common risks and mechanisms behind diseases; examining major cross-cutting areas of research; and proposing approaches that identify hurdles and envision solutions to age-related diseases.

As something new, nonprofit organizations working in health research were invited to the 2019 summit.  Participants were asked to anticipate where the field of geroscience might intersect with their own missions of improving health and well-being in later years, and of advancing cures for specific diseases.

BrightFocus’ Vice President of Scientific Affairs Diane Bovenkamp, PhD, was asked to address the summit, and also took part in a closed-door session to develop recommendations and map out future strategic directions.

She described how BrightFocus, since its creation in the 1970s, has funded more than $206 million in research into cures for Alzheimer’s, macular degeneration, and glaucoma.

“What’s really relevant for today’s geroscience summit is that age is the number one risk factor for all three of those diseases,” Dr. Bovenkamp said.
Because, as Dr. Bovenkamp said, “time lost is vision lost, and cognition lost,” she urged NIH and the organizations attending the summit, in addition to supporting the most innovative research, to pursue greater collaboration on priorities for direct intervention, such as educating and encouraging older Americans to participate in clinical trials and building outreach for screening and early diagnosis.

In research, she said, the perspective brought by geroscientists “adds spice” to the mixture of scientific disciplines working in more siloed ways to cure diseases.  Instead of being anchored in the same department, geroscientists work in a cross-section of disciplines, including genetics microbiology, neuroscience, biochemistry, oncology, epigenetics, zoology, and more. Together, they are reaching across their research silos to collaborate and explore the commonalities of aging diseases.  That cross-collaboration seems a promising way to explore innovative solutions to today’s most difficult challenges, and resembles the research funding programs BrightFocus itself has developed, Dr. Bovenkamp pointed out.

Dr. Bovenkamp gave examples of aging/geroscience research BrightFocus has funded [see link to related Q and A at the end of this article]. In addition, she described other BrightFocus projects that advance the cause, such as innovative symposia launched to bridge research findings about neurodegeneration of the aging brain and eyes. 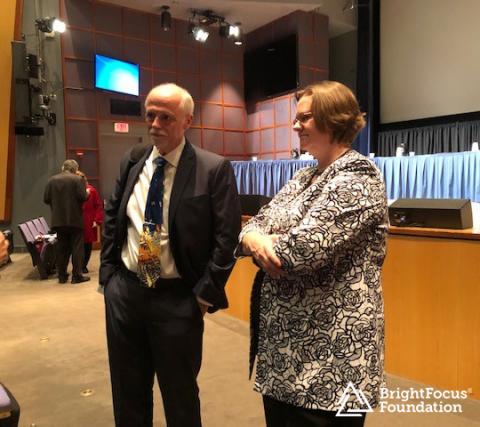 Dr. Bovenkamp and the Summit’s cofounder and organizer, Felipe Sierra, PhD, of NIH, talk with other participants at the Summit’s close
At the Summit’s close, Dr. Bovenkamp and fellow nonprofit representatives were asked to help fashion a geroscience action plan for moving forward that will be published jointly in the future.  Some of the areas of focus include: cross-sector collaborations; opportunities for public messaging on geroscience; and areas of crossover between geroscience, personalized medicine, preventive medicine, and disease-based research.

[Read a Q and A with BrightFocus VP of Scientific Affairs Diane Bovenkamp, PhD, where she describes how geroscience can be a natural ally in the search for cures for Alzheimer’s, AMD, and glaucoma.]