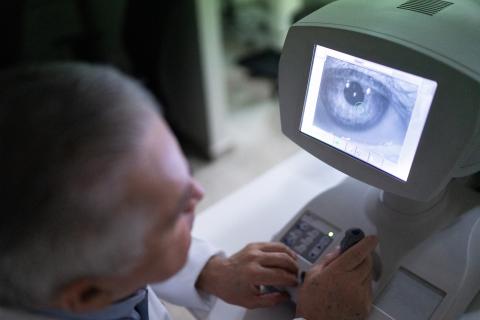 If you are diagnosed with age-related macular degeneration (AMD), you need to see your eye doctor regularly to determine how quickly your disease is progressing. Your doctor can:

At the first sign of any visual changes—no matter how small they may seem—you should make an appointment with your eye care provider. 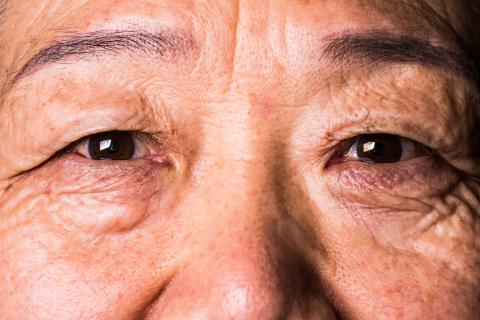 Once dry age-related macular degeneration (AMD) reaches the advanced stage, there is no form of treatment at present to prevent further vision loss. However, there are intervention measures that could delay and possibly prevent intermediate AMD from progressing to the advanced stage in which vision loss occurs.

The National Eye Institute’s Age-Related Eye Disease Study (AREDS) found that the progression of AMD could be delayed or prevented by taking nutritional supplements with a specific high-dose formulation of antioxidants (vitamins C and E and beta-carotene), zinc, and copper. A follow-up trial (AREDS2) was completed in May 2013. In that study, researchers found that the addition of omega-3 fatty acids to the supplements did not improve the formula’s success. The antioxidants lutein and zeaxanthin proved safer than beta-carotene, which increases the risk of lung cancer for smokers or ex-smokers.

The AREDS2 recommendation for the supplement formula is:

It’s important to find the right vitamins, since many are marketed for eye health but only a few have formulas that have proven effective. 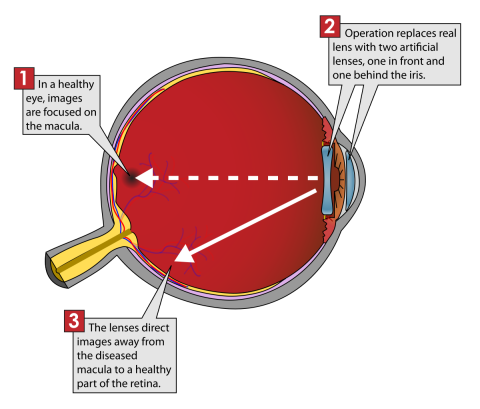 Approved by the FDA in 2010, the CentraSight® implantable miniature telescope (IMT) may help those with end-stage AMD gain back some vision. The tiny telescope is inserted into one eye, which then provides central vision while the other eye provides peripheral vision.

The telescope projects images over healthy areas of the retina. The IMT can usually be implanted by an eye surgeon during an outpatient surgical visit. After surgery, patients must participate in a structured vision rehabilitation program to learn how to perform daily activities using the device.

Wet age-related macular degeneration (AMD) can be treated with injections of angiogenesis inhibitors into the eye, with photodynamic therapy, or with laser surgery. None of these treatments will cure wet AMD, but each may slow the rate of vision decline or stop further vision loss. However, the disease and loss of vision may also progress despite treatment. Options should be discussed with a doctor. Click on a treatment option below to learn more. 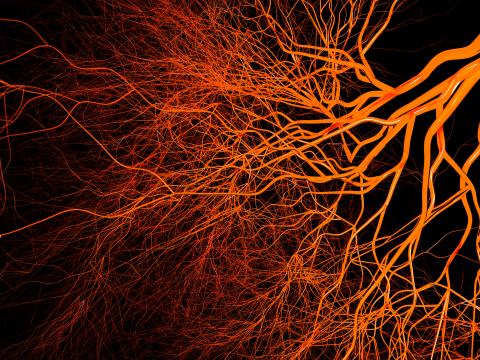 Photodynamic therapy (PDT) is most effective in a subtype of wet AMD called predominantly classic subfoveal AMD, in which blood vessel growth and leakage in the fovea—the small region in the center of the macula—are well defined. It should be noted that PDT is rarely used now that there are drugs (EYLEA, Lucentis, Macugen, and Avastin) that specifically block the vessel-promoting VEGF protein. During the PDT procedure, a drug called Visudyne® is injected into the arm. The drug courses through the body and is absorbed by the fragile, leaking blood vessels in the eye.

Because Visudyne is activated by light, the doctor directs a low-intensity laser at the retina for a little over a minute. This activates the Visudyne, allowing it to destroy the abnormal vessels. One treatment normally takes about twenty minutes and is relatively painless. The most common side effects of PDT include headache, injection site reaction, and blurred or reduced vision. Because the drug is activated by light, it is important to avoid exposing eyes or any part of the skin to sunlight or bright indoor light for up to five days after treatment. PDT may help to stabilize vision, but it will not restore lost vision. 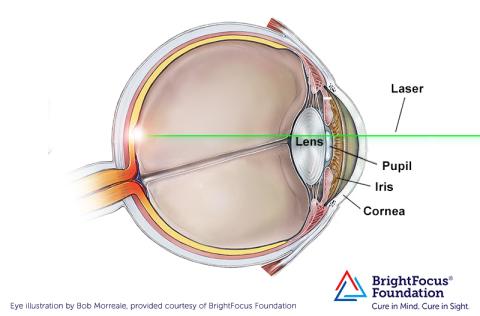 Laser photocoagulation surgery was the first treatment used for wet AMD, but it is only an option for a small number of patients. During the outpatient procedure, the eye is numbed, and a high-energy laser heats, seals, and destroys abnormal leaky blood vessels. This can potentially prevent further vision loss, but it results in a permanent blind spot due to scarring. Some patients experience mild pain during and/or shortly after the procedure. When successful, laser surgery is done once. However, if new blood vessels grow, surgery may have to be repeated.

Be Part of the Cure

The most valuable assets we have are the individuals dedicated to our cause. People like you are the reason we are able to boost our scientific agenda so that patients’ lives may be enhanced.

These studies are crucial to advancing medical approaches most effective for specific conditions or groups of people. Today’s clinical trials will lead to new standards of care in the future. Learn more here.

Your gift can help lead to treatments and a cure to end macular degeneration. Fund the latest, promising research and help provide valuable information to families living with this disease.