The Top Foods for Eye Health

Learn about the foods that can best maintain the health of your eyes.

Your mother probably told you to “eat your vegetables.” In this instance, she was right. Several large epidemiological studies have found that people who eat more fruits and vegetables have a decreased risk of age-related macular degeneration (AMD).

Protection is most likely provided by antioxidants in the fruits and veggies. AMD is thought to be caused, in part, by oxidative damage, and fruits/veggies provide antioxidants that our bodies cannot synthesize. Among these, lutein and zeaxanthin are particularly protective. These carotenoids, related to vitamin A, are concentrated in the macula. Foods that are rich in lutein and zeaxanthin include spinach, kale, collard greens, yellow/orange peppers, and yellow corn. 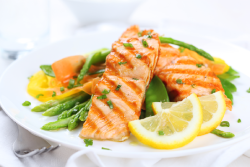 Consumption of fatty fish, such as salmon, tuna, mackerel, and sardines twice a week has also been linked to lower AMD risk. This may result from omega 3 fatty acids. However, a large clinical trial called the age-related eye disease study (AREDS2) showed that omega 3 fatty acid vitamin supplements did not provide protection, so it is apparently better to eat the fish than the supplements. There is also evidence that people with dry eye (low tear production) may benefit from the omega 3 fish oils. Fish should be grilled or broiled, not fried. Too much fish, however, may lead to higher mercury levels, so twice a week is a good target, not much more.

It’s not always easy to obtain and prepare fresh vegetables and fish. One option is to make smoothies with frozen blueberries, cocoa (also rich in antioxidants), flax or chia seeds (rich in omega 3 fatty acids) and spinach.

Higher levels of B vitamins have also been linked to lower AMD risk. Vitamin B6 is found in vegetables and beans, while B12 is abundant in fish and other animal products. However, an Australian study found that higher red meat consumption increases AMD risk. This may result from increased absorption of iron, which can accumulate in the retina and increase oxidative stress. 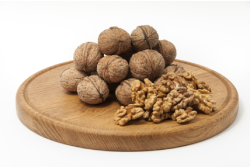 Nuts also contain omega 3 oils, especially walnuts, and some evidence suggests they may decrease AMD risk. However, nuts have lots of calories, so it’s best to limit the amount to no more than about 1/4 cup a day.

Higher body weight is a risk factor for AMD, as is higher systemic inflammation, which can also exacerbate arthritis. Weight and inflammation can be reduced by following a nutrient-rich, lower calorie diet. This is likely to result not just in lower AMD risk, but also better overall health. Consider large salads as the main course for lunch and dinner, adding relatively small amounts of animal protein, such as grilled salmon or chicken, if desired, as garnish. The traditional small salad that comes with dinner at a restaurant just isn’t enough. Restaurants specializing in large made-to-order fresh salads are a great option.

Stay in the know