The Role of Diet and Vitamins in Macular Degeneration: A Chat with NEI’s Emily Chew, MD 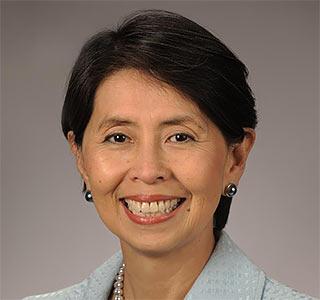 Emily Chew, MD is one of the top vision scientists at the National Institutes of Health. A director at the National Eye Institute (NEI), she is a world-renowned expert on how diet and vitamins impact age-related macular degeneration (AMD), a leading cause of blindness. Among her career accomplishments was to lead the Age-Related Eye Disease Studies (AREDS) at NEI, which established an eye vitamin regimen of the same name that is widely prescribed today. Dr. Chew is a winner of the Helen Keller Prize for Vision Research, presented by BrightFocus, which is regarded by many as the Nobel Prize for vision science.

In a recent BrightFocus Chat interview, Dr. Chew offered tips for navigating the world of diet, nutrition, and vitamin supplements. This article contains highlights from that conversation. The full interview and transcript can be accessed at this link.

What have we learned from the AREDS 1 and 2 clinical trials?

The AREDS project has been collecting data since 1992 to determine the long-term impact of vitamins and nutritional supplements on AMD. In the years leading up to it, other studies found that people with very high levels of certain vitamins in their blood had lower rates of cancer and heart disease. AREDS sought to address this question for AMD, asking about participants’ intake of vitamins and nutritional supplements, in addition to food.

Studies of heart disease and cancer found that supplementing the diet with high doses of vitamins had no effect on the risk of disease, which was a disappointment. In contrast, AREDS found that a combination of vitamin C, vitamin E, beta carotene, copper, and zinc delayed the risk of macular degeneration progressing to the late form, which can cause vision loss, by about 25 percent over five years. In the follow-up study, AREDS2, researchers were able to increase the beneficial effect by adding lutein and zeaxanthin, two types of carotenoids, which play an important role in the macula. (Although beta carotene plays a similar role to lutein/zeaxanthin, it increases the risk of lung cancer in smokers or former smokers, and therefore is not included in the AREDS2 supplement.) AREDS supplements are effective in people who’ve been diagnosed with AMD. When purchasing the supplements, you should select brands that carry an AREDS2 label.

Who should take AREDS supplements?

Healthy individuals and those with early AMD are not helped by AREDS. Only when you get to the intermediate stage does it help, and even then, it doesn’t help everyone. If you have a family history of AMD or are worried, the most important thing is to see your eye doctor. If you receive a diagnosis of intermediate AMD, then you should begin taking the AREDS supplements [under a doctor’s advice].

If you have good vision in one eye and either wet or dry AMD in the other, you have a good chance of being helped by the AREDS supplements. Even patients with dry AMD in both eyes and somewhat impaired vision may be helped. But the really severe dry type, where the center [eg, the macular of the eye] is involved and the vision is very poor, maybe more difficult. AREDS supplements cannot reverse vision damage that has already occurred.

Injectable treatments for the wet form of macular degeneration improve vision about 40 percent of the time. But there is no way to restore vision to people with dry AMD. AREDS supplements reduce the risk of more vision loss in the future.

Does diet also help keep AMD from getting worse? What have AREDS follow-up studies shown?

Well, I think diet is important for life. We’re actually realizing that more and more. At NIH, we’ve put a lot more resources into studying nutrition. Nutrition is the basis for many chronic conditions.

About ten years ago, researchers began to study the Mediterranean diet, which consists of nine components, including increased fruits, vegetables, beans, and nuts; whole grains; low consumption of red meat and dairy, with a preference for fish; low or moderate intake of wine; and a preference for monounsaturated fatty acids, such as olive oil, over saturated fats. Based on their responses to the food surveys, participants in the AREDS studies were scored as high, medium, or low adherence to the Mediterranean diet. For individuals who were already at risk for macular degeneration, very high adherence to the Mediterranean diet conferred a 25% reduction in the risk of progressing from early to late AMD and almost 30% reduction in the risk of progressing from moderate to late AMD. The Mediterranean diet was also associated with a reduced risk of cognitive impairment. While all elements of the diet, especially consumption of fruits and vegetables, are important, most significant in its effect on AMD was consuming two servings of fish a week.

The Mediterranean diet was also associated with a reduced risk of cognitive impairment. So, it seems like the brain and the eye are really tied together.

Can genetic testing predict whether you will get AMD, and is it generally recommended?

Knowing which genes are important for a disease helps us understand why the disease happens and offers clues for developing treatments. However, genetic testing of individual patients is not useful for diagnosis of AMD because the disease does not have straightforward genetics, where a defect in just one gene would be responsible for the disease. AMD implicates 34 different areas of the genome. Some genes can be protective and lower an individual’s risk of disease, while others raise it. And the environment plays a significant role; diet and smoking both have a substantial impact on risk. There are people with no apparent genetic risk who get AMD, and others with multiple disease genes who do not. So genetic testing is not recommended for clinical use, though it remains hugely important for research.

How do clinical trials assist with developing treatments for AMD? Are they important?

The importance of conducting clinical trials for disease treatments was highlighted in the past year with the Covid-19 vaccines. The basic science and lab work had already been done over a period of years. But as soon as vaccines were available, thirty thousand people volunteered, which made it possible to determine vaccine safety and efficacy in a matter of months. As Covid-19 has demonstrated, rigorously conducted clinical trials are the gold standard for all treatments, whether they be a pill, an injection, a lifestyle modification, or surgical treatment.

Anti-VEGF therapy for the wet form of AMD, involving injections of AvastinTM [bevacizumab, the very first anti-VEGF therapy], was preceded by years of rigorous clinical trials. Clinical trials can sometimes last for decades. Only through that very rigorous science can we determine whether treatments are good or not.

AREDS is almost 30 years old, and some participants have been with us from the very beginning. They do this for altruistic reasons, aware that although they may not benefit, someone down the line may. We applaud their commitment and generosity.

Are you excited about what’s ahead for vision research? What do you and your colleagues see as the next frontier?

The use of artificial intelligence and deep learning, where machines detect patterns that humans cannot, is transforming all of medicine and in particular vision research, which relies heavily on photographs and image processing. This technology will improve our ability to detect, diagnose, and predict who might progress to clinical disease, enabling us to treat them at an earlier stage. Deep learning can be combined with big data science, where huge amounts of data from medical records are analyzed across entire populations to find new markers for disease. Computer scientists and biomedical researchers are learning a lot from each other, and hopefully, this will lead to better research, better clinical practice, and better treatment for patients.

What do you wish more Americans knew about vision health?

In the big picture, healthy vision is crucial for quality of life. Most people would rather have a very disabling disease than lose their eyesight. I think the most important thing to recognize is that we’re all empowered to take care of ourselves. This means good nutrition, exercise – that that is absolutely crucial – and stop smoking. These are not only important for vision, but also for our brains and all aspects of general health. I think nutrition will turn out to be even more important as we learn more.