A new grant year is beginning, and in keeping with tradition, some of the top awards were rolled out at a breakfast held during the Association of Research in Vision and Ophthalmology annual meeting. This annual event is our way of saying “thanks” for everyone’s hard work. It’s also how we stay in touch with our extended family of grant recipients, many of whom keep giving back to us, and to the vision community, long after their grants have ended.

The breakfast started at 7 am. By 7:10, seats were hard to find. Along with active and past grantees, the 100-plus guests included BrightFocus board members, Scientific Review Committee members, and others.

However, the real VIPs in the room were the 2015 recipients of named grant awards, along with some of the donors who created and sponsored those opportunities.

“These special awards recognize outstanding researchers and those who have been great advocates for finding cures,” said Stacy Haller, BrightFocus president and CEO.

As speakers during the presentation, Haller and VP for Scientific Affairs Guy Eakin, PhD, kept their remarks deliberately short. “We know you came here to talk to one another,” Eakin acknowledged.

With that, animated conversations sprang back to life. In one corner of the room, new acquaintances already were hatching plans to do a study together. In another corner, a senior investigator held up his laptop and gave an impromptu presentation to colleagues who circled round him.

Many a fruitful collaboration has been shaped at this networking event. So it was back to talk, at elevated decibels. You could sense the excitement in the air—all about finding new treatments and cures for macular degeneration and glaucoma. 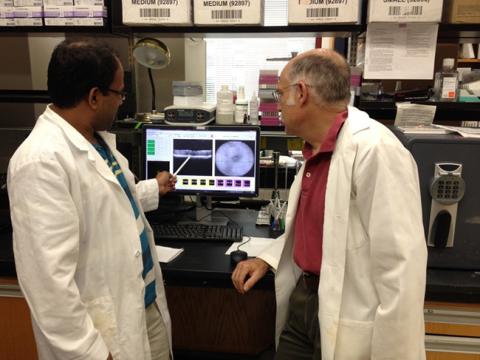 Charlotte & Alexander Danilevsky Memorial Award
Aparna Lakkaraju, PhD, U. of Wisconsin
Insight into the Formation of Harmful Deposits in the Retina 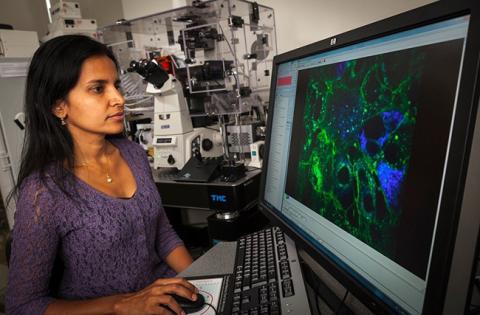 In her U. Wisc. Lab, Dr. Lakkaraju examines images of subretinal drusen.
Dr. Lakkaraju and her team use state-of-the-art live imaging of healthy and diseased retinal epithelial cells (RPE) to identify the earliest defects that could contribute to vision loss in AMD. Recently this has revealed that drusen not only grow below the RPE, but sometimes above the RPE, and that these sub-retinal drusen are associated with irreversible vision loss.

Sub-retinal drusen may be triggered by the release of harmful exosomes, which are also contributors to Alzheimer’s and Parkinson’s disease. However, the role of RPE exosomes in AMD has been largely unexplored, and Dr. Lakkaraju’s disease-in-a-dish model is an innovative way to study their role and impact on disease progression. This is her second BrightFocus  grant. 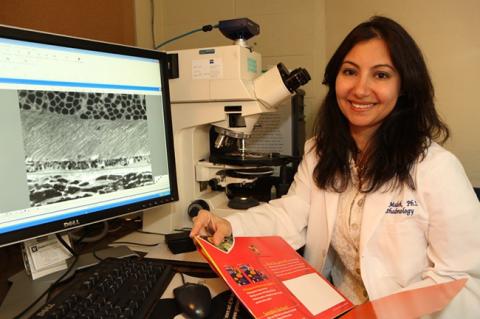 In her lab at Duke, Dr. Malek studies microscopic images of human retina.
While pursuing her PhD degree in vision science and physiological optics, Dr. Malek developed an interest in the pathology and cellular mechanisms underlying retinal diseases. That put her on the path towards acquiring a strong background in cell biology and a broad understanding of retinal and RPE cell function in health and disease. While it is known that inflammation and, in particular, immune cells called macrophages and monocytes, are associated with AMD in all its clinical stages, there’s still much to learn about how these immune cells contribute to vision loss. With her second BrightFocus grant, Dr. Malek plans to study the role of a specific protein, called osteopontin, that may be responsible for recruiting immune cells to the eye in the development and progression of AMD, and see whether it might be a good treatment target. 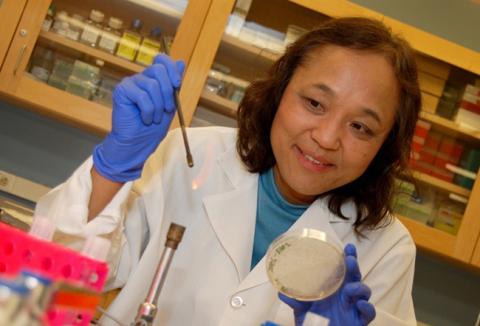 At Hopkins, Dr. Esumi scrutinizes RPE cells in a petri dish to see how they respond to stress.
"I started my career as a pediatric oncologist in Japan,” Dr. Esumi notes, and while “it was very rewarding to see children and their parents smile when they got better, it was enormously sad and frustrating when they came back with a relapse. It was then that I realized the importance of basic research to better understand human physiology and disease.” She, too, is focused on RPE cells that support and nourish the retina’s photoreceptors; she calls them the “main players” who are exceptionally hard workers and control critical events behind the scenes. “Not surprisingly, the RPE is thought to be the primary site of damage related to AMD,” Dr. Esumi says, with both chronic inflammation and oxidative stress as underlying factors. With her third BrightFocus grant, Dr. Esumi will investigate how a candidate molecule they’ve identified might help protect the RPE by increasing its resistance to damaging stressors. 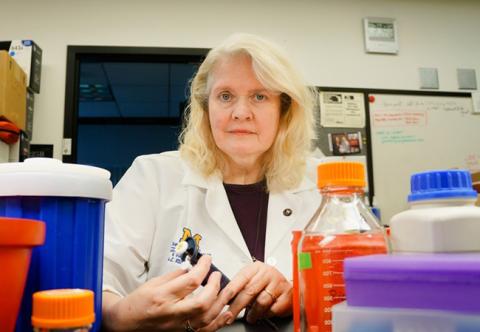 Dr. Richards in her lab at the University of Michigan.
When she first started studying the genetics behind eye diseases, she thought she’d be working on retinal disease. However, a colleague who was a glaucoma specialist challenged her to address one family’s history of hereditary glaucoma. “I wrote up a description of how to find the actual gene and study its properties,” Richards recalls. “He gave my write-up back to me with a grant application form for the BrightFocus Foundation attached, and said, ‘great, go apply for the funds to find the gene.

BrightFocus support “helped me get my start in glaucoma genetics that has been the central focus of my lab ever since,”  Richards said. With her third grant from us, she’ll be studying the role of abnormal homocysteine metabolism that has been linked to mutations in a gene associated with angle closure glaucoma gene. People with this mutation develop cysts in the iris that impede outflow and lead to pressure elevations. It may be this pathway is shared by other forms of angle closure glaucoma, and “we might be able to develop dietary interventions to prevent or limit the severity of types of glaucoma that involve homocysteine metabolism,” Richards speculates. 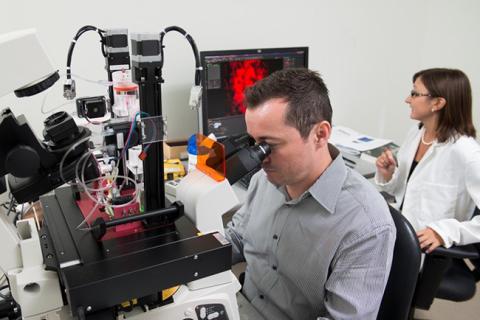 At UAB, Dr. Grytz and colleague get a close-up look of collagen structures in the optic nerve.
Having trained as a both a civil and biomedical engineer, Dr. Grytz takes an interdisciplinary approach to studying the eye and has developed experimental methods and computational simulation tools to provide insight into the biomechanics of glaucoma. In most forms, the tissue of the optic nerve becomes reshaped and eroded;  yet studying those changes can be challenging, in that the nerve head cannot be directly imaged, and the changes range in scale from IOP elevations “at the organ level” to a “potential alteration of the collagen fibril structure” (or axonal nerve fiber) at the micro-scale, he says. He’s proposing a new imaging and quantification methodology to be used in an animal model to gain better insight. “It is very challenging for young investigators with innovative ideas but limited preliminary data to obtain major grant funding,” he tells our donors. “Your gifts to National Glaucoma Research are critical for fostering new research ideas that can fundamentally change vision health." 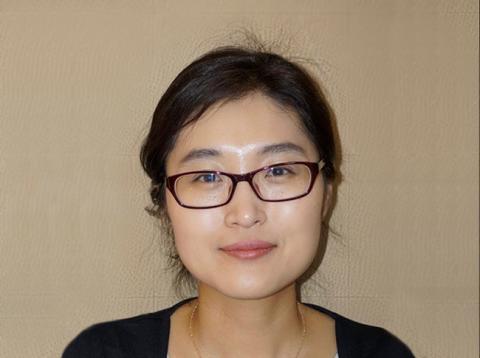 At UT Medical Branch, Galveston, Dr. Ha is investigating proteins that may lead to neuronal cell death.
Our bodies’ organs, including the eye, are miniature chemical factories, and depending on the interplay between genes and the environment, our cells can ramp up, ramp down, or complete revamp the proteins they produce. This process, one aspect of gene signaling, can greatly affect whether a disease like glaucoma progresses or is successfully resisted. Dr. Ha and colleagues will be looking for evidence  of whether two specific proteins, called CXCL10 and CXCR3, are involved in retinal inflammation and neuronal cell death during glaucoma, and, if so, whether it  might be possible to develop novel therapeutic approaches  to block or inhibit signals from corresponding genes to inhibit the expression and function of these proteins.  “I have a family history of glaucoma, and I understand how it is difficult to have ordinary life without vision,” Dr. Ha says. “I really appreciate that the BrightFocus Foundation and its donors support our research. I believe our research [into gene signaling] will help to find a therapeutic treatment for slowing or preventing the neurodegeneration and maintain the eyes’ physiological function in glaucoma.”

Learn about additional new vision research grants BrightFocus is funding in 2015 for macular degeneration and glaucoma.