BrightFocus Foundation recently held its first-ever Glaucoma Fast TrackSM to accelerate the fight for a cure by investing in promising young scientists in the field of vision research.

“The Glaucoma Fast Track is an immersive learning opportunity specifically created for scientists who are starting or contemplating a career in glaucoma research,” said the event’s organizer Diane Bovenkamp, PhD, BrightFocus’ Vice President for Scientific Affairs.

Bovenkamp said that the workshop was modeled on the success of BrightFocus’ Alzheimer’s Fast Track. [Read an article or watch a short video about that program last year.]

The day-long Glaucoma Fast Track featured world-renowned glaucoma experts who are known for their research and/or clinical expertise, as well as their mentoring skills. Together, they reviewed the latest discoveries and research directions, and inspired new thinking and interdisciplinary approaches in the search for cures.

Here are links to more details about the workshop. 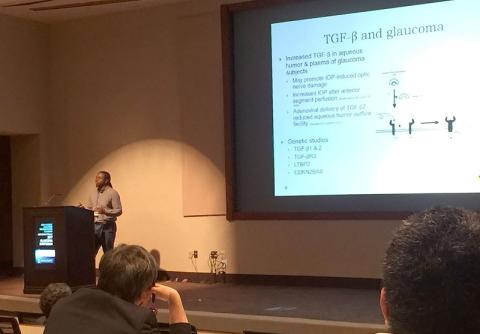 Ralph Hazlewood, PhD, is a Glaucoma Fast TrackSM attendee from the lab of Rachel Kuchtey, MD, PhD, Vanderbilt University (who was co-principal investigator on a prior BrightFocus NGR grant). Here he’s shown giving a platform talk at the ISER/BrightFocus 2017 Glaucoma Symposium that followed, which led to a dialogue with more senior investigators and several new research ideas.

Ralph Hazlewood, PhD, one of the 100-plus attendees at the workshop, is a postdoc researcher in the lab of Rachel Kuchtey, MD, PhD, a glaucoma clinician and researcher at Vanderbilt University and former co-principal investigator on an NGR grant. Under Dr. Kutchtey’s direction, Hazlewood is investigating a possible role for angiotensin receptor blockers, a blood pressure medication, in regulating intraocular pressure (IOP) in glaucoma.

Despite having been involved in glaucoma research since graduate school, Hazlewood finds that it’s still easy to get lost at the big scientific meetings.

“Among the sheer amount of talks, it is sometimes difficult to get a grasp of the all the relevant research in one’s respective field, and even more difficult securing time to meet one-on-one with some of the more prominent investigators,” he said.

In contrast, and to address this common difficulty that happens at scientific conferences, workshop speakers made a point of summarizing the important research in the field, and “not only those works that complement their own research, but the studies that will drive innovation for glaucoma therapies and motivate early career investigators in new promising areas of research,” Hazlewood said. He cited discoveries in ocular biomechanics, extracellular matrix remodeling and transforming growth factor (TGF)-beta regulation as “hot topics” that inspired him.

Julia Oswald, PhD, another attendee, works in the lab of BrightFocus grantee Petr Baranov, PhD, at Harvard. The lab is focused on both glaucoma and macular degeneration; while Baranov uses a 2016-18 Macular Degeneration Research grant from BrightFocus to investigate neuroprotective factors in the retina, Oswald is experimenting with retinal ganglion cell (RGC) transplantation to restore sight lost to glaucoma.

“I think that especially for students and young investigators, the Glaucoma Fast Track day is a great concept,” Oswald said. “Most valuable to me was the detailed overview of available animal models and their distinct characteristics with respect to setup, handling, IOP elevation, RGC damage and death, etc., which helped me to gain a better understanding of what pitfalls to avoid when selecting and later on evaluating a specific model.” 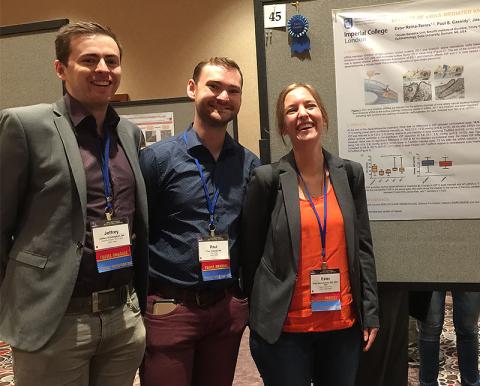 BrightFocus sponsored travel awards for promising investigators wanting to jump-start their careers in glaucoma research. One of them, Esther Reina-Torres, PhD, of NGR grantee Dr. Darryl Overby’s lab, University College London, won first prize for her poster at the symposium that followed. She is pictured with co-author Paul Cassidy (middle, also of Dr. Overby’s lab) and Jeffrey O’Callaghan (left), Trinity College Dublin, who is working in the lab of former MDR grantee Dr. Peter Humphries. O’Callaghan and Stephen Schwaner (not shown), of the Georgia Institute of Technology in Atlanta, also were BrightFocus travel fellows.

Similar thoughts were expressed by Wei Zhu, a pharmacy graduate student from China’s Qingdao University, and by Ester Reina-Torres, PhD, who’s based at Imperial College, London, and attended Glaucoma Fast Track with a BrightFocus Travel Award.

“I loved this symposium! I really appreciated the chance to communicate with people and I learned a lot of new things,” said Zhu, emphasizing how important it is “for me, and people from another culture” to be able to network in this way. One of her goals for the future is to improve collaboration between Chinese and U.S. researchers.

Reina-Torres is investigating how micro-RNA signaling affects the tissue of the trabecular meshwork to control outflow capacity and ultimately IOP, a project funded through a 2017-19 NGR grant to her mentor, Darryl Overby, PhD. She thanked BrightFocus for her travel grant, adding:  “I found the Fast Track very interesting, especially for an overview of aspects of glaucoma that are not directly related to my research, such as optic nerve degeneration and clinical studies.”

Even for mid-level researchers, such as cell biologist Emmanuel Buys, PhD, the Glaucoma Fast Track can be extremely useful, particularly if they are transitioning in their careers. For years Buys has focused on a nitrous oxide cell signaling pathway shared in a variety of disease models, including glaucoma. Whereas he previously ran his own lab at Harvard’s Mass General, now he works for the Cambridge, Mass.-based Ironwood Pharmaceuticals.

“In my current job, I aim to identify new indications for drugs Ironwood has in the pipeline,” he said. “The program today had great speakers all around, and provided a great overview of the glaucoma landscape and provided a unique opportunity to network,” he said.

Having the Glaucoma Fast Track workshop precede the ISER-BrightFocus 2017 Glaucoma Symposium: Basic Science Catalyzing Treatments for Glaucoma made it all the more useful for making connections. Attendees at the workshop were able to continue their dialogue over several days.

For example, Ralph Hazlewood described how, following his platform talk at the symposium, several experts in the field came up to him and said that those conversations “yielded new interesting research ideas that I plan to pursue in the coming months.”

In terms of accelerating his own research agenda, “the BrightFocus Glaucoma Fast Track definitely lived up to its name and purpose,” Hazlewood concluded.