At Alzheimer's Fast Track, BrightFocus Helps Shape the Next Generation of Science

How do you know what you don’t know? It’s an age-old problem that haunts experts in any field, particularly those searching for new solutions. In fact, according to the Harvard Business Review the most recent global financial crisis was caused, in part, by this.

We cannot allow this to hamper progress in the Alzheimer’s field.

BrightFocus, through its Alzheimer’s Disease Research (ADR) program, is helping to confront that problem with its Alzheimer’s Fast Track® workshop. Held every other year in advance of a major neuroscience meeting, Alzheimer's Fast Track brings together 50-75 scientists just starting out in the Alzheimer’s field, mostly PhD candidates and post-docs who have been handpicked by their lab directors and faculty advisors.

The group spends three days with a top-flight faculty of experienced researchers and clinicians, gaining an interdisciplinary look at the Alzheimer’s research – where real progress is being made, where potential new treatments lie, what’s still critical to get to the next stage, and where the knowledge gaps still exist. [Read an overview of the 2016 BrightFocus Alzheimer’s Fast Track faculty and program in PDF format.]

What do Alzheimer’s disease, macular degeneration, and glaucoma have in common? They all feature nerve cell damage and loss (also called neurodegeneration), which can ultimately lead to dementia or loss of vision. To encourage worldwide collaborative research on these neurodegenerative diseases, BrightFocus will sponsor a day-long satellite workshop on Tuesday, March 28, 2017, as part of the 13th International Conference on Alzheimer’s & Parkinson’s Diseases (AD/PD 2017) in Vienna, Austria, next year (conference takes place from March 29 to April 2, 2017).

The workshop, called “Common Features of Neurodegenerative Diseases: Exploring the Brain-Eye Connection and Beyond,” will feature speakers who are preeminent experts in research on all three diseases, and is co-chaired by BrightFocus Alzheimer’s Degeneration Research and National Glaucoma Research Scientific Review Committee members, Guojun Bu, PhD (Mayo Jacksonville); Todd Golde, PhD (U Fla); and Adriana Di Polo, PhD (U Montreal).

For more information, visit the satellite workshop website at adpd2017.kenes.com/Brightfocus or look for additional details to appear soon on the BrightFocus website. 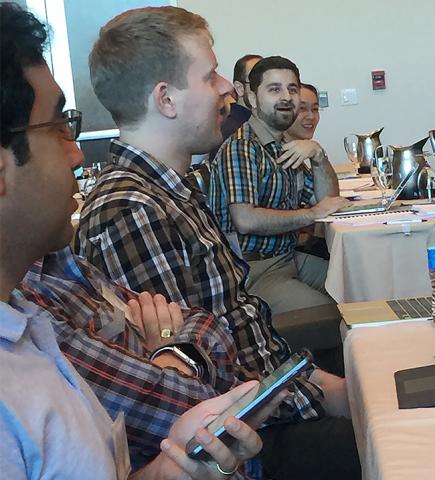 GIVE AND TAKE: Attendees take part in a Q/A session.
For individuals who are just starting out in the field, it’s an invaluable learning opportunity. After each high-caliber presentation, you see their minds light up with important research questions they’d like to pursue on their own.

The goal, from BrightFocus’ perspective, is to nurture a new and emerging cadre of neuroscientists to accelerate discoveries leading to new treatments and cures for Alzheimer’s disease.

“What we need in the field is sustainability… and sustainability is something you do not get from retired people,” explains Harry Steinbusch, who started Alzheimer's Fast Track 14 years ago.

“We need to encourage innovative thinking, new challenges, and the best ideas.”

As professor of cellular neuroscience at Maastricht University, the Netherlands, and director of the European Graduate School of Neuroscience, Steinbusch has thus far guided 76 PhD students towards their careers in neuroscience.

Inspired by Science and Creativity

“I always look forward to the Alzheimer’s Fast Track Workshop because it allows me three full days to let my brain breathe, absorb and assimilate without having to worry about deadlines, funding, and all of the other things that often distract us from the actual beauty and thrill of science,” says Cindy Lemere, PhD, who is one of Alzheimer's Fast Track’s three co-chairs (along with Steinbusch and Frank LaFerla, PhD).

Lemere is an associate professor at Harvard and a member of the BrightFocus ADR Scientific Review Committee. A hands-on researcher, she had the opportunity to start her own lab at Brigham and Women’s Hospital some 20 years ago and now, at mid-career, has been associated with major discoveries and publications in the field. All this time, she also has been mentoring students and preparing them to walk in her shoes. It makes her all the more appreciative of what Alzheimer's Fast Track is achieving. 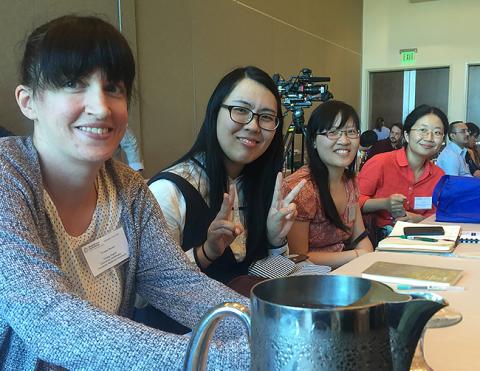 WHO WILL BE THE ONE TO DEFEAT ALZHEIMER’S? Attendees leave the workshop inspired about doing Alzheimer’s research.
“Year after year, I am so impressed with the high caliber and quality of students and faculty that participate, and this year was no exception,” she said. “From the very first evening, there were lively discussions and networking all around the room.”

Alzheimer's Fast Track helps researchers further define and articulate their own areas of expertise and collaborate with a diverse array of scientists. Attendees spend several hours brainstorming, networking, and collaborating in small groups to design, write, and present their own grant proposals.

Over the workshop’s three days, Lemere found herself “inspired by the science presented and the creativity of the students.” “Participants were fully engaged and really seemed to enjoy the program,” she observed.

“I am very appreciative to the BrightFocus Foundation for their outstanding organization of this workshop, and for allowing me to participate.” 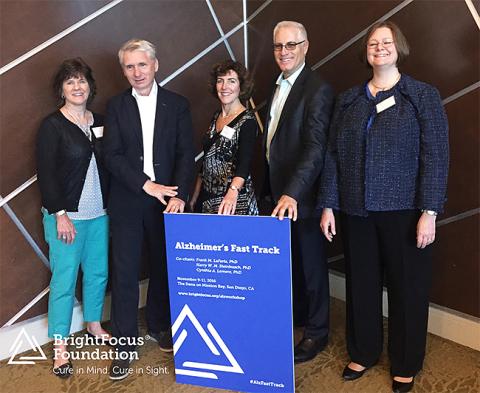 Besides Lemere and Steinbusch, Alzheimer's Fast Track’s third co-chair is Frank LaFerla, PhD, dean of the University of California-Irvine School of Biological Sciences.  As someone near the top of the academic hierarchy, he knows the challenges of recruiting and retaining a top-notch research team.

LaFerla knows firsthand that a researcher must be inspired by the journey toward scientific discovery. While he is now serving as a dean, he began his career in the lab working on early mouse models of Alzheimer’s.  In addition to his current leadership role, he is using an ADR grant to investigate factors linking diabetes and Alzheimer’s.

For junior investigators, Alzheimer's Fast Track opens a window and provides a view of what direction their future research might take, not to mention what they still have to learn, and the help they’ll need getting there.

Based on the success of this model, BrightFocus is planning similar workshops as satellites to other major scientific meetings. [See article below.]

Speaking of the attendees at Alzheimer's Fast Track, Steinbusch said, “for three days they receive quick, fast information about the newest things in the field. And then they go – with their backpack – to the Society for Neuroscience meeting, and they spread it all around there, their ideas and their inspiration!”

Steinbusch hopes that Alzheimer's Fast Track sparks enthusiasm and creativity, including, “to question what is the idea, how difficult is it, why should I do it?”

Alzheimer's Fast Track helps new Alzheimer’s researchers discover what they still don’t know, laying the foundation for a promising next generation of science.