Eric McCormack, actor and singer, performed a musical tribute to the legendary Gene Wilder following a documentary sneak preview of WILDER:His Life, Legacy and Battle with Alzheimer’s Disease at awards gala supporting research for diseases of mind and sight.

(June 6, 2022) Washington, D.C.—BrightFocus Foundation hosted its seventh annual gala, MIND | SIGHT | CURE: An Evening of BrightFocus, on June 9 at the National Portrait Gallery. The awards program honored exemplary scientists working with the foundation and showcased some of the world’s most exciting research to end Alzheimer’s, macular degeneration and glaucoma. 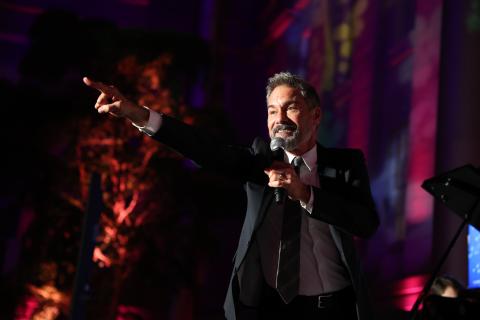 “Now more than ever we understand the power of bold, innovative research to change lives,” said BrightFocus President and CEO Stacy Pagos Haller. “We are seeing progress to defeat these devastating diseases, and are so proud to recognize some of these outstanding scientists.”

Award-winning actor and singer Eric McCormack, best known for his role as Will Truman in Will & Grace, performed a musical tribute to Gene Wilder following a sneak peak of the new documentary WILDER: His Life, Legacy, and Battle with Alzheimer’s Disease.

“I am so honored to pay tribute to the legendary Gene Wilder and to join with BrightFocus to support their amazing research for a cure,” said McCormack.

Six leading BrightFocus-funded scientists shared their current research findings on subjects ranging from regulating inflammation to treat Alzheimer’s; to advancing initial efforts to restore sight loss from glaucoma; to developing a “personalized medicine” approach for age-related macular degeneration during a science demo prior to the awards dinner and program.

Awards were presented to the following scientists for their contributions to advancing cures for diseases of mind and sight:

Scientific Impact Award. David M. Holtzman, MD, Washington University School of Medicine Department of Neurology. His legacy and leadership in Alzheimer’s research is the foundation for the first blood-based test for Alzheimer’s that is in use in clinical trials today.

BrightFocus Foundation, a leading private funder of research to end Alzheimer’s, macular degeneration, and glaucoma, is currently supporting a $65 million research portfolio of over 275 projects worldwide, providing expert information and resources about these diseases. For more information, visit brightfocus.org.