Jason Meyer, PhD, along with Sarah Ohlemacher and colleagues at Indiana University-Purdue University Indianapolis (IUPUI), have reached a major milestone by creating and treating retinal ganglion cells (RGCs) derived from the skin cells of people with glaucoma.

The immediate impact of the work will be to advance the use of induced pluripotent stem cell (iPSC) technology to screen new glaucoma treatments, something Meyer described as the project’s next steps. Success in that next endeavor could lead to new drugs and therapies that are neuroprotective, meaning they protect RGCs and prevent vision loss in glaucoma more effectively than pressure-lowering treatments alone.

In the study, Meyer, Ohlemacher and colleagues took skin cells biopsied from volunteers with an inherited form of glaucoma and from controls (ie, volunteers without the disease) and genetically reprogrammed them to become pluripotent stem cells. Like other stem cells, iPSCs are able to differentiate into any cell type in the body. In this case, the researchers directed the stem cells to become RGCs. The results of this earlier phase in the experiment, which took about three months and also was funded by BrightFocus, were recently published in another report (Sridhar et al, Stem Cells Translational Medicine 2016). 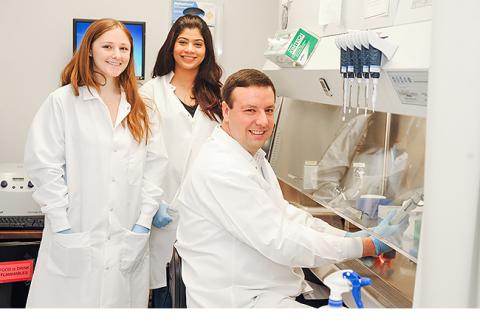 Jason Meyer, with Sarah Ohlemacher, left, and Akshayalakshmi Sridhar, all shared in the work, along with others at IUPUI.

Next, the research team subjected the stem cells they had created in culture to various stressors, trying to mimic disease conditions. And at a certain point, the RGC cells began to differentiate based on whether they were initially derived from individuals with glaucoma or from healthy individuals.

Or, as Meyer explained in an IUPUI press release: "When we turned glaucoma patients' skin cells into stem cells [iPSCs] and then into RGCs, the cells became unhealthy and started dying off at a much faster rate than those of healthy individuals.”

In an interview with BrightFocus, Meyer explained that the same methodology “could prove to be a useful screening tool to identify compounds that could potentially protect RGCs and increase their survivability,” including brain-derived neurotrophic factor (BDNF). BDNF, a sort of growth hormone for cells, has been explored as a potential treatment in animal models and shows some promise.

RGCs created using iPSC could be useful in high-throughput screening of various BDNF compounds, according to Meyer.

"Now that we have produced cells that develop features of glaucoma in culture dishes, we want to see if compounds we add to these RGCs can slow down the degeneration process or prevent these cells from dying off. We already have found candidates that look promising and are studying them.

“In the more distant future, we may be able to use healthy patient cells as substitute cells as we learn how to replace cells lost to the disease,” Meyer continued. “It's a significant challenge, but it's the long-range goal, and we think not unrealistic.”

[Learn more about the challenges behind replacing RGCs, and about other BrightFocus-funded research that takes a different approach, in another recent Science News Report.]

Meyer, a cell biologist who started working on the project four years ago, has become an expert in iPSC research. He holds an appointment as a primary investigator with the Stark Neurosciences Research Institute at IU’s School of Medicine.

He’s extremely grateful for the BrightFocus funding he received to conduct these experiments, and not just because of these successful results, but because it allowed him to train others on iPSC techniques. This included Ohlemacher, a PhD student, as well as their research colleagues at IU and elsewhere.

With this type of paying forward, an NGR grant goes to benefit “not just the grantee; nor does it bring a big return only for people at the level of senior investigators.  I think it will pay off in a lot more ways,” Meyer said.