CLARKSBURG, MD—BrightFocus Foundation mourns the loss of the legendary Paul Greengard, PhD, who passed away this past week on April 13.  He was both an early grantee and longtime friend of BrightFocus, and became our honorary board member in 2010. 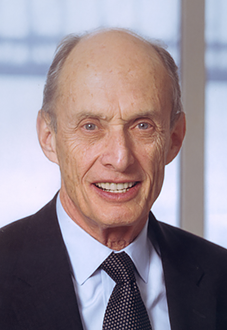 Dr. Greengard had a long and accomplished research career, including the seminal discovery of how nerve cells can communicate with each other using proteins called neurotransmitters to activate a chemical signaling cascade. His research helped to demystify the root causes of many neurological disorders, including Alzheimer's disease and neurodegeneration, which has yielded targets for possible drug interventions that are still being explored today.

He spent the past 35 years at The Rockefeller University in New York City, where he was the Vincent Astor Professor of Molecular and Cellular Neuroscience.  He joined that research faculty in 1983, and was active in the lab until the end of his life at age 93.

His most famous discovery, for which he was awarded the Nobel Prize in Physics or Medicine in 2000, was the foundational insight that nerve cells communicate with one another through chemical and electrical signaling that works in tandem, a process known as signal transduction.  At the time, few scientists subscribed to the concept, but it pioneered a whole new field of study and shaped new approaches to treating a number of brain disorders linked to breakdowns in cellular communication, including  Alzheimer’s and Parkinson’s diseases, schizophrenia, bipolar disorder and drug addiction.  Dr. Greengard shared the Nobel Prize with Arvid Carlsson, MD, PhD, of Göteborg University, Gothenburg, Sweden, and Eric R. Kandel, MD, of Columbia University, New York.

BrightFocus Foundation is honored to have supported the early work of Dr. Greengard leading to those discoveries.  A 1986 grant from our Alzheimer's Disease Research program led him to initiate a series of milestone experiments into protein phosphorylation in specific brain regions related to Alzheimer's disease, including the phosphoprotein DARPP-32. In the resulting publications, Dr. Greengard described the role of DARPP-32 and how it helps to regulate cell functions in the brain.  Today, phosphorylation is still being studied as one of the drivers in Alzheimer’s-related neurodegeneration.

Looking back on those early years, Dr. Greengard remarked that “funding from BrightFocus provided a necessary bridge between a novel research idea and the preliminary results necessary to obtain prolonged government support for the development of new treatments and therapies.” He called the ADR grant funding, “invaluable to my research and the work of my colleagues.”

Later, Dr. Greengard served as co-principal investigator on a 2008-11 BrightFocus ADR grant to Paul Lombroso, MD, of Yale University.  It funded their investigation of another protein called STEP (for striatal enriched tyrosine phosphatase) and its role in nerve cell communication breakdown and Alzheimer's disease. After their grant ended, the two continued their research collaboration, and had initial success in their efforts to develop small-molecule inhibitor drugs as a treatment, and have now turned to using STEP inhibitors to treat other neuropsychiatric disorders.  That work is ongoing.

In 2010, when Dr. Paul Greengard accepted the offer to become an honorary member of our Board of Directors, BrightFocus issued a statement calling ourselves “grateful for and honored by the time and effort that Greengard, a world-renowned researcher and former BrightFocus grantee, contributes to the BrightFocus mission.”

He will be greatly missed.

Learn more about Dr. Greengard and his work from our website.