Learn about the key differences between the early- and late-onset forms of Alzheimer’s disease.

Alice glanced at her husband with an expression that mixed love with worry. “This all started about a year ago,” she said, “just after Ed’s 58th birthday. At first, all we noticed was that he was speaking more slowly and sometimes he couldn’t think of the word he wanted. His memory didn’t seem too bad then, but it’s gotten worse since. Now he seems to have trouble understanding anything more complicated than a simple sentence. He had to leave work, and we’re worried about the future. He knows things are not right, and we feel very alone with this. Ed’s mother developed dementia in her 60s, and it was awful for her and her family. We worry, too, about our children. Are they going to get this?”

Ed and Alice visited their primary care physician with their concerns and were told that Ed’s condition did not sound like Alzheimer’s disease (AD). “He’s too young for that,” said Dr. Kent. Just to be complete, Dr. Kent asked Ed to remember three words. When Ed was asked to repeat them after 3 minutes, he did so with little difficulty. “That doesn’t seem like Alzheimer’s disease,” said Dr. Kent.

Dr. Kent was correct, since 90 to 95 percent of AD cases occur in people of age 65 years or older. Furthermore, early in its course, AD typically attacks memory of past personal experiences that occurred at a particular place and time, which is called episodic memory. Difficulty with language could suggest a stroke, a different type of dementia, or some other condition. But, as is often a surprise to many clinicians’ and patients, some AD cases actually begin earlier as it did with Ed, whose subsequent amyloid PET scan showed that his brain had accumulated the amyloid plaques linked with AD.

*The names and details in this story are composite and fictitious. They do not identify specific individuals.

Early- and Late-Onset Alzheimer's: How do they Differ?

EOAD, which is thought to affect between 220,000 and 640,000 Americans, begins between age 45 and 64. It looks different than late-onset AD, and it has different consequences because it arrives during the prime years of adulthood. That may be why the delay between symptom onset and diagnosis is greater for EOAD than for AD that manifests in older individuals. However, early recognition is especially important in cases of EOAD.

The symptoms of EOAD can be similar to the late-onset form of the disease. These symptoms include:

However, there are some key differences between EOAD and typical, late-onset AD:

Dr. Mario F. Mendez (see Further Reading below) describes how EOAD can present atypically, and he groups these together as “Type 2 AD”:

MRI brain images of people with EOAD can look a little different than the images for typical AD. For example, shrinkage of the hippocampi and temporal lobes is less, and shrinkage of the parietal lobes is more prominent, with EOAD. Also, changes in white matter (the nerve fibers that connect parts of the brain and spinal cord) may be more significant in MRI brain images in people with EOAD. 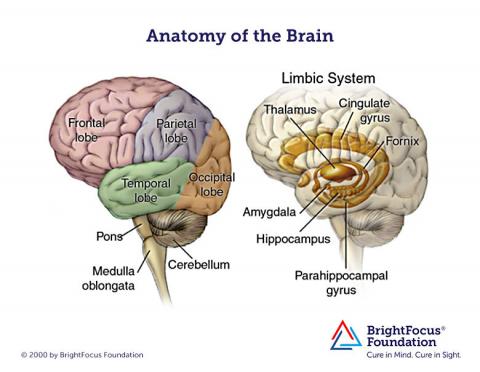 Diagram of the brain and parts of the limbic system.

As with later-onset AD, no specific medication will cure or even reverse the disease, but medications such as Aricept® (donepezil) and Namenda® (memantine) can nonetheless reduce symptoms in some people. Amyloid PET scanning may help with the differential diagnosis in some situations if that is available. Genetic tests will identify the small number of individuals with the form of the disease than can be passed along to their children, and that is important for assisting with genetic counseling.

Interventions, which should take place once the diagnosis is well-established, can include support groups for the patient and help for family members. With an adult in his or her 50s, discussion often includes counseling regarding how to modify or exit from employment. Patients and families can be guided toward available resources, support groups, and services for EOAD patients and their caregivers. Given the early-onset and projected survival time, some patients will choose to participate in a clinical trial. That may offer the patient and care system some hope while contributing to general knowledge that will help many others as well.