Normal pressure hydrocephalus (NPH) is an uncommon cause of dementia that occurs when the the inner, fluid-filled chambers of the brain enlarge as though expanded by fluid pressure. However, the pressure of the cerebrospinal fluid (CSF) which fills those chambers seems to be normal when tested with a lumbar puncture (“spinal tap”), accounting for this condition’s name.

Something about the way Ms. Connors* walked into the exam room suggested that her story was not going to be typical for Alzheimer’s disease. She was only 72, but her feet dragged along the floor as though she were 100 years old. It was as if she wasn’t quite sure how to use her legs properly. She seemed to have lost interest in being with her family or doing any of the things that used to brighten her day. When we learned that she had been having cognitive problems during the past year and also had become incontinent, the need for neuroimaging was clear. The diagnosis was normal pressure hydrocephalus, which is a debilitating disorder, but it can be treatable. In Ms. Connor’s case, the characteristic presentation and early stage of her symptoms suggested that treatment might improve her walking, incontinence, and mental state.

*The name and details were changed to protect privacy.

NPH is a disorder that continues to intrigue medical researchers, clinicians, and concerned families. It is an uncommon cause of dementia, but early treatment can make a difference, so it is important to recognize it at the earliest stage possible. In NPH, the ventricles (the inner, fluid-filled chambers of the brain) enlarge as though expanded by fluid pressure. Unexpectedly, when tested with a lumbar puncture (“spinal tap”), the pressure of the cerebrospinal fluid (CSF) which fills those chambers seems to be normal, accounting for this condition’s name. NPH that has no apparent medical cause, called iNPH or idiopathic NPH, is different from secondary NPH (sNPH), which is caused by diseases or injuries that interfere with CSF absorption and may be associated with moderate elevation of CSF pressure despite the “normal pressure” name. Although iNPH accounts for fewer than one in 15 cases of dementia, early detection can point the way toward specific and helpful treatment. 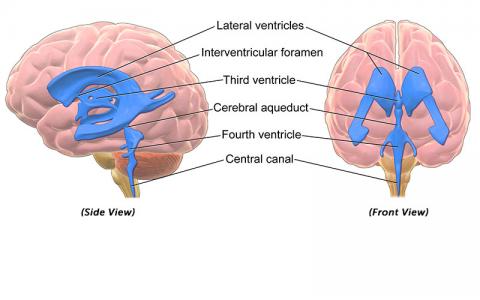 iNPH is often found alongside disorders that might stress the blood supply to the brain tissue around the brain’s ventricles: high blood pressure, diabetes, and lipid disorders. It is possible that brain tissue destruction related to impaired blood supply plays a role in the disease’s development.  iNPH can become symptomatic as early as a person’s 50s or 60s.

How is NPH Diagnosed?

The diagnosis of NPH is prompted when a patient describes or shows a characteristic group of three symptoms: gait disorder, dementia, and incontinence. The absence of one or more of these symptoms does not make the diagnosis impossible, though, and some people with all these symptoms have no evidence of NPH. Once there is clinical suspicion of NPH, neuroimaging with a CT or MRI is needed for further assessment. The presence of characteristically large ventricles on brain imaging leads to a referral for a clinical diagnostic test called the “large volume CSF tap.” In this type of lumbar puncture, the removal of 40 to 50 ml (milliliters) of CSF can lead to significant and rapid clinical improvement and some investigators consider this to be a predictor of better treatment response.  Other tests, such as those that use different imaging methods or evaluate CSF flow, may be useful but are not used routinely. These include a special PET scan to assess regional brain metabolic activity and SPECT scanning to evaluate blood flow in the brain.

Difficulty walking is the most frequent problem: balance is impaired, turning becomes more difficult, and the legs may show muscular rigidity and exaggerated deep tendon reflexes. Dementia is the next most common problem in iNPH, and often includes executive function difficulties (the ability to reason and solve problems.) and apathy. Memory, attention, visuospatial functions (the ability to understand such things as shapes, locations, and directions), and mood can also be affected. Urinary incontinence, the third characteristic symptom, affects about half of people with iNPH.

The NPH treatment considered most definitive is ventriculoperitoneal shunting, which requires surgical insertion of a tube that runs from the brain, inside the neck, past the chest cavity, and into the abdominal cavity where excess cerebrospinal fluid is deposited. When the NPH is secondary to disorders that limit CSF absorption, the justification for this surgical treatment is clear—but shunting also helps some patients with iNPH. Shunting of NPH significantly helps about one-third of those who have the procedure done.

Complications are not unusual and they can include serious problems such as stroke, bleeding or infection in the brain, and permanent neurological deficits or death. When dementia is the main or only symptom, the likelihood of improvement with shunting is limited. Improvement in gait problems and incontinence are more likely. Sometimes improvement after this procedure is only temporary, though others can continue to improve for up to two years.  Shunting at an earlier stage of the illness, before three years, is considered more likely to be helpful.