The Progression of Alzheimer's Disease 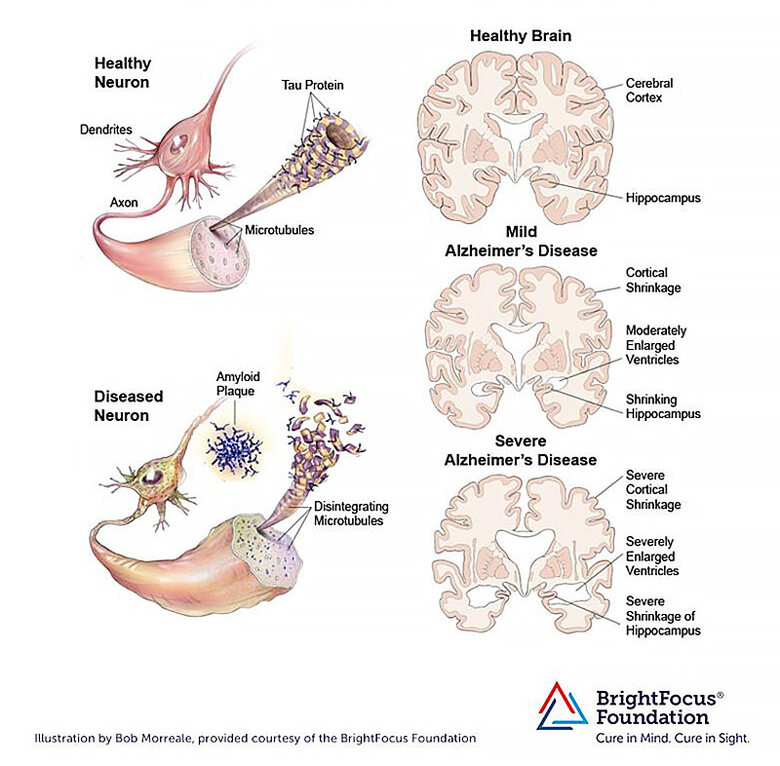 One of the hallmarks of Alzheimer's disease is the accumulation of amyloid plaques between nerve cells (neurons) in the brain. Amyloid is a general term for protein fragments that the body produces normally. Beta amyloid is a fragment of a protein snipped from another protein called amyloid precursor protein (APP). In a healthy brain, these protein fragments would break down and be eliminated. In Alzheimer's disease, the fragments accumulate to form hard, insoluble plaques.

Neurofibrillary tangles are insoluble twisted fibers found inside the brain's nerve cells. They primarily consist of a protein called tau, which forms part of a structure called a microtubule. The microtubule helps transport nutrients and other important substances from one part of the nerve cell to another. Axons are long threadlike extensions that conduct nerve impulses away from the nerve cell; dendrites are short branched threadlike extensions that conduct nerve impulses towards the nerve cell body. In Alzheimer's disease the tau protein is abnormal and the microtubule structures collapse.

As Alzheimer's disease progresses, brain tissue shrinks. However, the ventricles, chambers within the brain that contain cerebrospinal fluid, are noticeably enlarged.

In the early stages of Alzheimer's disease, short-term memory begins to decline when the cells in the hippocampus degenerate. Those with the disease lose the ability to perform routine tasks.

As Alzheimer's disease spreads through the cerebral cortex (the outer layer of the brain), judgment worsens, emotional outbursts may occur and language is impaired. Advancement of the disease leads to the death of more nerve cells and subsequent changes in behavior, such as wandering and agitation.

In the final stages, people may lose the ability to feed themselves, speak, recognize people and control bodily functions. Memory worsens and may become almost non-existent. Constant care is typically necessary. On average, those with Alzheimer's live for 8 to 10 years after diagnosis, but this terminal disease can last for as long as 20 years.