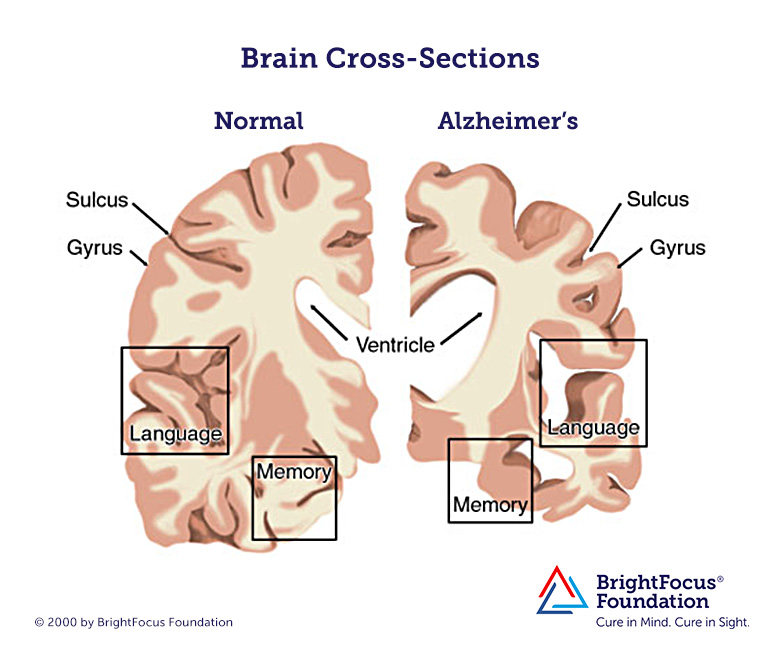 In Alzheimer's disease, there is an overall shrinkage of brain tissue. The grooves or furrows in the brain, called sulci (plural of sulcus), are noticeably widened and there is shrinkage of the gyri (plural of gyrus), the well-developed folds of the brain's outer layer. In addition, the ventricles, or chambers within the brain that contain cerebrospinal fluid, are noticeably enlarged. In the early stages of Alzheimer's disease, short-term memory begins to fade (see box labeled 'memory') when the cells in the hippocampus, which is part of the limbic system, degenerate.

The ability to perform routine tasks also declines. As Alzheimer's disease spreads through the cerebral cortex (the outer layer of the brain), judgment declines, emotional outbursts may occur and language is impaired. As the disease progresses, more nerve cells die, leading to changes in behavior, such as wandering and agitation. In the final stages of the disease, people may lose the ability to recognize faces and communicate; they normally cannot control bodily functions and require constant care. On average, the disease lasts for 8 to 10 years, but individuals with Alzheimer's can live for up to 20 years.