“These new grant awards continue to expand, strengthen and diversify our global scientific portfolio,” said BrightFocus President and CEO Stacy Pagos Haller. “More than ever before, we are seeing great signs of progress to reverse the trajectory of these heartbreaking diseases.”

Guided by its world-class scientific advisory committees, BrightFocus awarded a total of 95 new grants to carry out its full, 360-degree approach to research, fostering a better understanding of the root causes of disease onset, improving early disease detection and diagnosis, and developing effective new drugs and treatments.

To broaden the field of research and include new, emerging perspectives, 44 percent of this year’s awarded scientists are women; nearly 25 percent were granted to leading institutions outside the U.S.; and 80 percent of the new awards will support promising, early-career researchers.

“This investment in science is made possible by BrightFocus donors who have witnessed the powerful impact of our bold, innovative research,” said Haller, noting that a vast majority of support for BrightFocus is through individual donations.

Details on the new projects, which begin July 1, 2022, will be announced upon the completion of individual agreements with the partnering institutions and scientists. (Application information for the 2023 BrightFocus grants is now available at: science.brightfocus.org/apply-grant). 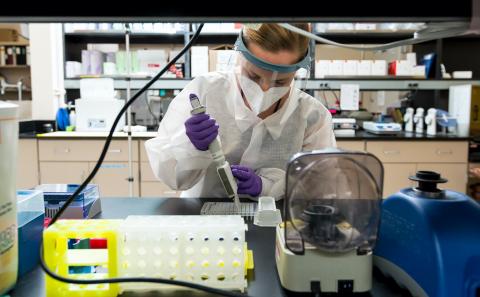 The PrecivityAD™ blood test, now available to physicians, uses an easily obtained blood sample to screen for Alzheimer’s with high accuracy. It is hoped the test will lead to earlier diagnosis and also benefit clinical trial recruitment. | C₂N Diagnostics, used with permission

BrightFocus Foundation is a private funder of research and public awareness to defeat Alzheimer’s, macular degeneration, and glaucoma, and is currently supporting a $65 million global portfolio of over 260 scientific projects. For more information, visit brightfocus.org.