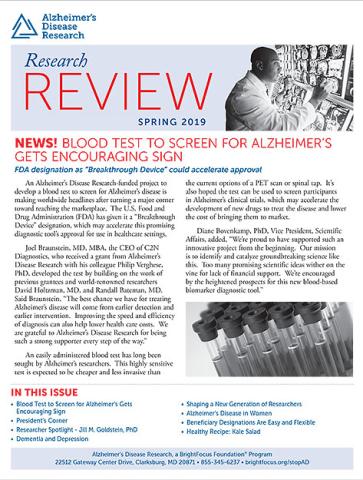 News! Blood Test to Screen for Alzheimer’s Gets Encouraging Sign

An Alzheimer’s Disease Research-funded project to develop a blood test to screen for Alzheimer’s disease is making worldwide headlines after turning a major corner toward reaching the marketplace. The U.S. Food and Drug Administration (FDA) has given it a “Breakthrough Device” designation, which may accelerate this promising diagnostic tool’s approval for use in healthcare settings.

Joel Braunstein, MD, MBA, the CEO of C2N Diagnostics, who received a grant from Alzheimer’s Disease Research with his colleague Philip Verghese, PhD, developed the test by building on the work of previous grantees and world renowned researchers David Holtzman, MD, and Randall Bateman, MD. Said Braunstein, “The best chance we have for treating Alzheimer’s disease will come from earlier detection and earlier intervention. Improving the speed and efficiency of diagnosis can also help lower health care costs. We are grateful to Alzheimer’s Disease Research for being such a strong supporter every step of the way.”

An easily administered blood test has long been sought by Alzheimer’s researchers. This highly sensitive test is expected to be cheaper and less invasive than the current options of a PET scan or spinal tap. It’s also hoped the test can be used to screen participants in Alzheimer’s clinical trials, which may accelerate the development of new drugs to treat the disease and lower the cost of bringing them to market.

Diane Bovenkamp, PhD, Vice President, Scientific Affairs, added, “We’re proud to have supported such an innovative project from the beginning. Our mission is to identify and catalyze groundbreaking science like this. Too many promising scientific ideas wither on the vine for lack of financial support. We’re encouraged by the heightened prospects for this new blood-based biomarker diagnostic tool.”

I hope you are as encouraged as I am by the exciting news on the cover of this issue of Research Review! Being able to screen for Alzheimer’s disease with a simple, affordable blood test holds the potential to dramatically change how the disease can be treated and even prevented in the future.

I hope you take pride in what you are helping to accomplish as an Alzheimer’s Disease Research supporter in this and other successes we’re sharing with you here. Your support makes it possible for so many talented researchers to pursue new approaches around the world.

You also help make it possible for us to accelerate the path to a cure by hosting the one-of-akind BrightFocus Alzheimer’s Fast Track® workshop. Bringing up-and-coming researchers together with the world’s top experts in Alzheimer’s research accelerates their knowledge towards becoming an expert in this challenging field and encourages countless opportunities for collaborations.

Thank you for partnering with us in the fight to stop Alzheimer’s disease. With the increasing number of people in the U.S. and around the world living with Alzheimer's or other dementias, we simply cannot and will not waste a single day in the race to find a cure!

Eighteen percent of people in the United States are over age 60. It’s estimated that number will rise 25 to 30% by 2050, making healthy aging one of the most important public health challenges of our time. Jill M. Goldstein, PhD, is launching a comprehensive effort to identify early midlife biomarkers for Alzheimer’s disease risk with regard to sexbased differences in brain aging and memory decline. This is an ambitious project and a special opportunity to leverage the unique expertise and access of the research team. This is also one of the first projects to comprehensively assess multiple predicted biomarkers for Alzheimer’s risk in middle age and relate them to brain scans, physiology, genetics, and clinical data, with a specific focus on discovering the differences between men and women developing Alzheimer’s disease.

Dr. Goldstein has been a Professor of Psychiatry and Medicine at Harvard Medical School for three decades and is Founder and Executive Director of the Women, Heart and Brain Global Initiative at Massachusetts General Hospital, and the Helen T. Moerschner Endowed Massachusetts General Hospital Research Institute Chair in Women’s Health. She is a clinical neuroscientist and expert in sex differences in health and diseases associated with the brain, in particular, depression and its association with heart disease, and risk for Alzheimer’s disease.

Among people with dementia, symptoms such as depression, apathy, and withdrawal are common. Some experts estimate as many as one in six people with dementia suffer from major depressive disorder. Milder, but significant, symptoms of depression are even more common. These symptoms are distressing to people and their families and can be just as debilitating, if not more so, than changes in memory and thinking. And interestingly, symptoms may occur in the “pre-Alzheimer’s” disease stage, when a person may have the Alzheimer’s proteins amyloid beta (Ab) and tau in their brains, but before they have developed overt signs of the disease.

However, we’re learning more about early-stage protein buildup. Exciting new technology is being used by Alzheimer’s Disease Research grantee Jennifer R. Gatchel, MD, PhD, to visualize tau protein in the brains of living older adults for the first time. It’s hoped the results of her project will pave the way for developing more effective treatments and prevention strategies for the earlier stages of Alzheimer’s. But depression-like symptoms can be caused by other medical problems, so it’s critical to work with your healthcare team to ensure an accurate diagnosis.

Shaping a New Generation of Researchers

We recently held our annual BrightFocus Alzheimer’s Fast Track® workshop. This unique three-day conference is organized and led by Diane Bovenkamp, PhD, BrightFocus’ Vice President of Scientific Affairs, and brings the best scientific minds in the Alzheimer’s field together, both young and world renowned, for hands-on training and collaboration.

This Fast Track offered opportunities for attendees to learn about the latest science in Alzheimer’s research, including:

These early-career scientists are graduate students and post-doctoral fellows who are at a time in their lives when some of the best ideas are born and emerging. Our one-of-a-kind workshop equips them with a network of mentors and potential collaborators to help accelerate new ideas. We’re hoping that this event helps researchers be better positioned to break through on the next big discoveries.

Nutrient-dense kale adds a twist to the classic warm spinach-and-bacon salad. Leafy green vegetables (both kale and spinach), as well as olive oil, are recommended as part of a healthy diet.

Looking at the evidence, it appears the burden of Alzheimer’s disease is much larger for women than it is for men. Women account for nearly two-thirds of the people diagnosed with the disease and a similar proportion of caregivers are women as well. For example, a 65-year-old woman has a 12 percent risk of developing Alzheimer’s during the remainder of her life while the risk for a 65-year-old man is only about half as great (6.3 percent). This is in spite of the fact that the female hormone estrogen protects the healthy brain and exerts a protective antiAlzheimer’s effect up
to menopause.

One’s sex (determined by genes and chromosomes), and gender (social role and preferred orientation) play in the risk for developing Alzheimer’s in women. Sex also affects the rate and impact of risk factors. Women with adult onset diabetes are at greater risk for developing dementia than are men with the same illness. Physical activity is another important antiAlzheimer’s protective factor and women who were less physically active earlier in life may have missed out on that protection. Being widowed is a more serious risk factor for developing Alzheimer’s for women than for men as well. And, despite being diagnosed earlier and declining more rapidly than men, women still survive longer.

Beneficiary Designations Are Easy and Flexible

Preparation for tax season is also the perfect time to consider beneficiary designation changes that could make a real impact for a cause you care about. Designating a beneficiary for your IRA and retirement plans, life insurance policies, and annuities simplifies the estate planning and administration process and is a simple and
easy process.

To name Alzheimer's Disease Research, a program of BrightFocus Foundation, as a beneficiary, please contact your retirement plan administrator, insurance company, bank, or financial institution for a change-of-beneficiary form. For more information, please call Charles Thomas at 301-556-9397 or watch a short, informative video on the benefits of designating beneficiaries at brightfocus.org/plannedgiving.