Small yellow or white deposits under the retina, called drusen, are a defining feature of age-related macular degeneration (AMD). When an eye doctor spots these on a dilated eye exam, it’s typically the first thing leading to a diagnosis.

Drusen seem to be related to extracellular waste products that collect in the eye as its normal housekeeping grows less efficient due to age, genes, and various other damaging influences. However, no one knows for sure how they are formed, and the answer might lead to earlier intervention and less reliance on injections as a treatment for advanced wet AMD.

Recent experiments in the lab of Imre Lengyel, PhD, of Queen’s University Belfast (QUB) have shed light on this mystery. He is co-principal (PI) investigator on a 2014-16 MDR grant to Richard Thompson, PhD, of University of Maryland. 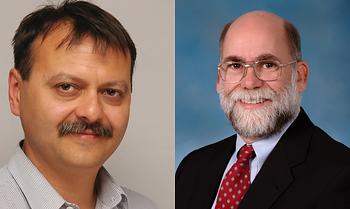 Imre Lengyel, PhD, left, of Queen’s University Belfast (QUB), has a new publication related to his BrightFocus-funded work with Richard Thompson, PhD, right, of University of Maryland.
Already, the Thompson-Lengyel research team is responsible for the groundbreaking discovery that the retina contains tiny spheres of mineralized calcium phosphate, called hydroxyapatite (HAP), which may initiate drusen formation and signal the onset of AMD. They believe these tiny spheres of calcified mineral may provide the early scaffolding around which drusen form, serving to collect the protein and lipid material that make up the bulk of larger drusen.

[Read our coverage of this earlier discovery, which was published in the prestigious Proceedings of the National Academy of Sciences (Thompson et al, 2015).]

Dr. Thompson, the PI, was not part of this most recent work, which was already in motion in Lengyel’s lab at the time the two received BrightFocus funding for their collaboration resulting in the PNAS article. However, the work was completed during their grant and sheds more light on the HAP story.

The ultimate goal of their research is to to stop AMD at earlier stages through targeted therapies that reduce drusen growth. If that helps prevent progression to late AMD, it might alleviate some of the need for injections to treat wet AMD, which can be costly and inconvenient for patients in the short term, and pose some long-term risk of atrophy.

Shedding Light On How Drusen Form

Leading theories have held that drusen are formed when the eye can no longer efficiently dispose of photoreceptor outer segments, a part of the eye’s sensory apparatus whose photochemical components quickly burn out and are discarded daily. Still other theories suggest drusen derive principally from fats and/or proteins circulating in blood plasma used to nourish the retina, then discarded as waste products in neighboring tissue called the retinal pigmented epithelium (RPE), which is where AMD is believed to start.

However, it was not clear how this all happens.  Why is it that fat and protein molecules, whether they are derived from blood or the photoreceptors, are retained under the RPE? Do they simply stick to each other, like they do in blood vessels in atherosclerosis, or form larger molecular aggregates known as oligomers, which have a propensity to clump together, like what’s seen in Alzheimer’s disease with the formation of amyloid plaques? The HAP theory had provided an answer to this and that is the reason the works from the Thompson-Lengyel team is so relevant. How HAP deposits form, however, is still an enigma.

In a recent work appearing last month in the journal Investigative Ophthalmology & Visual Science (Pilgrim et al, 2017) Lengyel and his team at QUB and UCL wanted to clarify this question, so they experimented with creating the conditions for drusen formation in cell cultures. In their experiments using only RPE cells, they were able to produce drusen-like deposits that contained all the known components of drusen in human eyes: HAP, lipids, proteins, and trace minerals.

“To our knowledge, this is the first time that these four major molecular constituents have been replicated and confirmed in a single RPE cell culture system,” the authors state. As for the causes mentioned above--HAP scaffolding, fatty build-up, or protein oligomer formation, “the fact that RPE cells can generate HAP deposits  show that changes in RPE cells are really key to AMD,” they add.

Intercepting with early drusen formation may inhibit the proinflammatory cascade that accelerates the journey to wet or dry AMD, these researchers reason, noting that “a better understanding of the molecular events leading to the retention of drusen components is essential to the success of this strategy.” In addition, a model system like theirs, which mimics early aspects of drusen formation, might serve as a good platform for testing drug therapies aimed at stopping and clearing early RPE deposits

New approaches “should target early stages of AMD to prevent progression to advanced stages,” the authors state. “Our culture system may be useful in achieving this goal.”