Looking Beyond the Retina to the Biology of AMD

Macular degeneration is a blinding disease that damages central vision by destroying the nerve cells of the macula, at the very center of the retina. Particularly with the most common type, called age-related macular degeneration (AMD), this gradual neurodegeneration can take years.

And even though AMD slowly damages light-sensing neurons, many other cell types appear to be involved in the disease process. At ARVO 2019, BrightFocus grantees shared a wealth of discoveries about key players involved in macular degeneration. They describe the retina as a dynamic and changing environment where crosstalk among cells and cross-currents of immune activity can have positive or negative consequences for AMD. 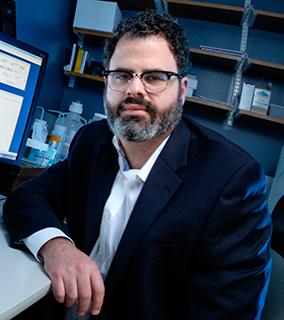 In his ARVO 2019 talk and poster, Daniel Saban, PhD, a 2017-19 Macular Degeneration Research (MDR) grantee from Duke University, described how the resident immune cells of the brain and retina, called microglia, reside in microenvironments, called “niches,” in the subretinal space, and then migrate to the damaged retinal pigment epithelium (RPE), a layer of cells that helps to feed and maintain retinal neurons. The microglia then try to protect the RPE from further damage by turning on genes involved in antioxidant functions and other protective pathways, and turning off genes involved in negative immune response pathways.

However, Dr. Saban and colleagues have discovered that the behavior of microglia cells may vary, depending on their location and circumstances. In an animal model, they detected differences in the response of microglia recruited from different parts of the retina. These findings were recently published (O’Koren et al, Immunity, 2019). Studies such as Dr. Saban’s enhance our understanding of immune cell behavior in AMD and open up new ideas for targeted therapies. [ARVO 2019 Abstracts No. 5640 and 985.] 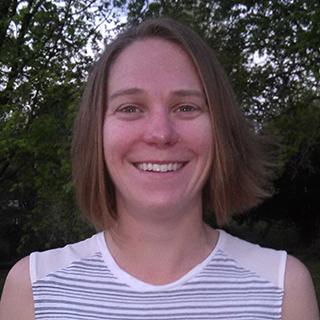 Malia Edwards, PhD, a 2016-19 MDR grantee at Johns Hopkins, studies another type of retinal immune cell, known as Müller cells (MC), working with donated adult human tissue. As the most common type of glial cell found in the retina, MCs perform a number of different services that help retinal cells maintain their structure and function. Normally MCs line up neatly in a cell layer and extend linear projections that expand to cover the entire retina; however, Edwards’ poster contained vivid images showing how MCs “remodel’ and lose their linear morphology in response to the retinal distress caused by choroideremia.

Dr. Edwards thinks that these changes to MC location and function are driven by signaling that causes MCs to take over and “fill in” where they detect dysfunction. While this response may initially be helpful to other retinal cells, MC remodeling could also harm the retina and impair treatment attempts. She thinks the same process is happening in geographic atrophy (GA), a late-stage form of dry AMD. (ARVO 2019 Abstract No. 4388) 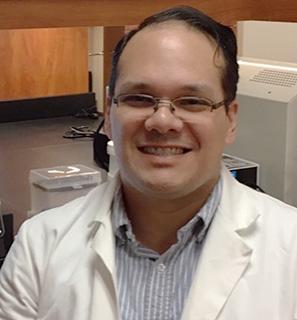 A Hot Topic talk by the University of Florida’s Cristhian Ildefonso, PhD, focused on chronic inflammation in the eye that stresses retinal cells and creates conditions for geographic atrophy (GA), the most advanced form of dry AMD. He is a 2017-19 MDR grantee.

To have one’s presentation labeled as a “Hot Topic” by the ARVO Program Committee, is a special honor indicating that it represents some of the newest and most innovative thinking in the field.

In the case of Dr. Ildefonso’s talk, finding treatments for GA also happens to be one of the most pressing current needs in the macular field. Like wet AMD, GA also kills retinal cells and causes vision loss, but without the overgrowth of fragile, leaky blood vessels seen in wet AMD. And whereas wet AMD can be treated with drug injections, GA has no treatments at this time.

AMD develops in part because the delicate nerve cells of the retina, and the tissue layers that support them, become stressed over decades of use. Gradually retinal conditions deteriorate, and Dr. Ildefonso and colleagues had the idea to test what would happen if they kick-started an immune response. To do so, they injected a low-dose of lipopolysaccharides (LPS), or large molecules found in the outer membrane of gram-negative bacteria, in animal models to simulate low-level inflammation. To their surprise, activating the innate immune response in this way yielded short-term protection to both the retina structure and its response to light. “Understanding how this activation of the systemic immune response protects the retina could lead to the identification of therapies that may help slow AMD,” Dr. Ildefonso and his colleagues concluded. [ARVO 2019 No. Abstract 989] 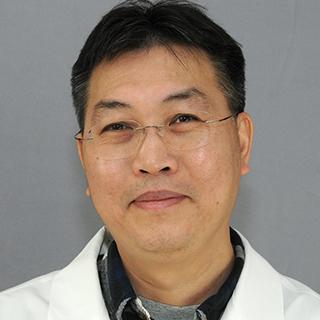 A similar hypothesis is being explored by Eric Yin Shan Ng, PhD, a 2015-17 MDR grantee from Schepens Eye Research Institute/Massachusetts Eye and Ear Hospital (associated with Harvard Medical School). He has been studying a part of the innate immune system known as toll-like receptors (TLR). Receptors are like customized docking stations which attract specific molecules to cells. TLRs help regulate cell function, including the immune response. Dr. Ng’s poster showed how, in an animal model, the introduction of a bacterial infection induced inflammation and triggered choroidal neovascularization (CNV), the growth of wet, leaky blood vessels seen in wet AMD. However, administration of a systemic antibiotic was shown to mute the TLR response and suppress CNV. [ARVO 2019 Abstract No. 4902.] 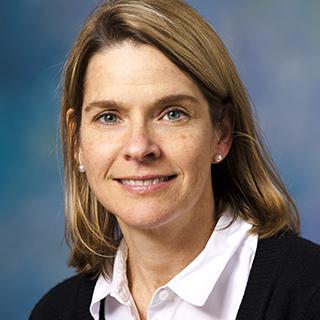 Still other BrightFocus grantees are studying the interaction between immune cells and dying photoreceptors.  They include 2015-18 MDR grantee Marie Burns, PhD, of the University of California Davis.  Her talk focused on how deteriorating PRs activate the immune system and cause an influx of immune cells into the retina.  The heterogeneity of those distinct populations of immune cells could assist in the development of biomarkers and provide information about the earliest stages of PR degeneration, she proposed. [ARVO 2019 Abstract No. 5639]

Looking at Other Cellular Players 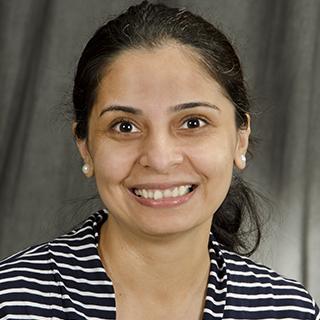 Ruchira Singh, PhD, a 2015-18 MDR grantee at the University of Rochester, also studies which cells participate in and/or cause AMD.  Her work is largely done in cell models grown from adult human tissue.  Previous work from her lab showed that common features are shared between AMD and an inherited form of macular dystrophy.  These include the development of drusen and changes to Bruch’s membrane, a layer of cells between the RPE and the choroid layer filled with blood vessels (Galloway et al, PNAS, 2017; see earlier Science News report).

In an ARVO 2019 poster, Dr. Singh further solidified that hypothesis, reporting that both localized cell signaling from the RPE and choroid, as well as factors carried in blood serum, alter cell activities in ways that contribute to drusen formation [ARVO 2019 Abstract No. 1227].

In a talk, described how a rare inherited form of retinal degeneration impairs the cross-talk between photoreceptors (PR), which are the light-sensing neurons of the retina, and the retinal pigmented epithelium (RPE), a layer of cells that provide their life support. This can lead to RPE dysfunction. [ARVO 2019 Abstract No. 4763]. 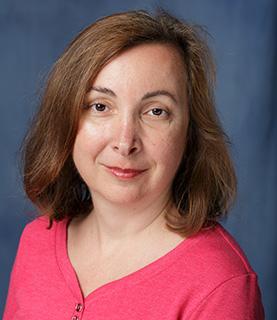 Astra Dinculescu, PhD, a 2017-19 MDR grantee at the University of Florida, is studying the extracellular deposits, including drusen, that accumulate at the interface between the RPE and choroid, a tissue layer carrying blood vessels, in AMD.  Her recent work has focused on mutant proteins associated with a late-onset retinal degeneration (L-ORD).  L-ORD causes widespread atrophy of choroid and retinal cells and both central and peripheral vision loss.  Dr. Dinculescu wanted to see if these different mutant proteins used a common pathway to trigger those effects—and results from her animal experiments found they did not. Instead, each mutant protein triggered retinal degeneration by different mechanisms. This could possibly underscore the need to pursue personalized medicine solutions. [ARVO 2019 Abstract No. 5639] 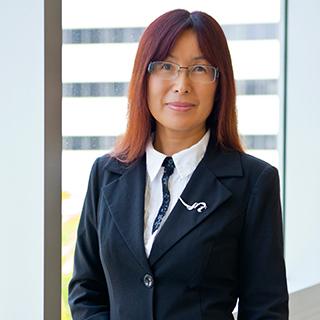 Zhihong Hu, PhD, of UCLA’s Doheny Eye Institute, has a 2016-18 MDR grant to develop an automated way to detect and track GA.  And she, too,  believes that PRs tell part of the story.  Her poster showed how early alterations in PRs, as seen on OCT scans, are a marker of GA progression.  Dr. Hu thinks that early changes in PRs could be a useful tool for identifying patients at risk of rapid progression, particularly if tied to deep learning, where machines are taught to detect critical changes.  Indeed, her pilot study showed that early PR alterations in eyes with AMD correlated with atrophy in the same regions 12 months later.  [ARVO 2019 Abstract No. 1535]

In summary, BrightFocus-funded research at ARVO provided new insights about what’s going on at the cellular level in and near the retina during macular degeneration.  Armed with these insights, other BrightFocus-funded researchers are discovering new treatments, including neuroprotection, ie, ways to nourish and defend retinal cells from damage.  More about that in other reports from ARVO 2019.