Helping Yourself and Others Adapt to Low Vision

Dan and Chris Roberts, a married couple from Missouri, offer to share their experiences with low vision, and caregiving, respectively. Dan is a teacher, advocate, and  co-founder of the organization MD Support, which provides information on macular degeneration. Chris has many years of experience in caring for Dan and others in her family. Together they are a couple that has faced adversity with courage, generosity, honesty, and even humor. Recently they shared what they have learned with BrightFocus. 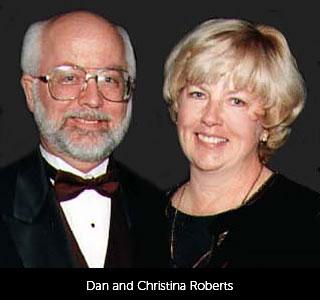 Dan and Chris Roberts each claim to be lucky in how they can respond to low vision in the family.

“In my soul I think I was born to be a teacher,” says Dan.  He loves to learn and then teach others what he has learned. He does that now by getting information about AMD to hundreds of low-vision support groups (also called information groups) across the nation. In addition to his work with MD Support, he also has a website with Prevent Blindness, and serves as the Chief Editor for that organization.

Chris has been there for her husband since he was first diagnosed with low vision at age 50. (He is now 73.) His first diagnosis was a low-vision condition known as central serous retinopathy, and then came macular degeneration. She says she’s been able to assist Dan because she has learned about caregiving from her own extended family. Unlike those with full-time jobs outside the home, Chris is a homemaker who is able to stay at home with Dan and give him her time and attention. Her children and grandchildren, who live only 20 minutes from them, can sometimes help out as well.

Says Dan of Chris, “We did a lot of studying. She and I both sat in on doctors’ meetings and conventions, to learn what the research was doing and where we could find resources. I share everything with her as far as what I learn, because I know it’s going to help her understand me, which helps me.”

As Dan faced his condition, “we went together, we talked about it all the time,” says Chris. “We had total openness in our conversations about what he was feeling and going through. We knew each other’s feelings and moods, and if there was something wrong going on, then we could sense it, but we did the whole thing together.”

The Challenge of Adapting to Vision Loss

Dan says that the hardest part of living with a low-vision condition was the fear of the unknown. Was his condition going to get worse, even lead to complete blindness? (It did not.) Loss of confidence was another scenario, due to an inability to plan ahead or perform tasks that were once easy for him.

Dan shares the example of his frustration at being unable to fix a light switch in his home, a task previously easy for him. Chris came over and held a flashlight for him, and suddenly the task was not so overwhelming. He realized, “Okay, I don’t have to hurry and get this light switch fixed. I can take my time, so I slowed down. She held the light, she held the tools, and we got the darn light switch fixed.”

“My grandmother used to say that for every mountain, there’s a valley,” notes Dan. “You’re going to have to go through the valley to get to the mountain, and sometimes it’s hard to get to that mountain when you’re going through a depressive state, and so those were the times Chris and I had to work together.”  If you don’t have a spouse or caregiver, find a support group to help you get through the hard times, the couple says.

“Become proactive. That’s a good way to handle this problem [of depression]. Take care of it before it becomes a problem for you. Get annual eye exams, improve your diet, keep moving, and help other people.”