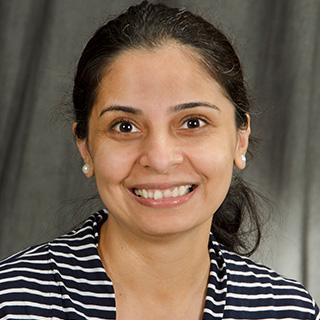 Dr. Singh is senior author of a recent PNAS report.
Ruchira Singh, PhD, of the University of Rochester is hopeful that different macular disorders could potentially be stopped by treatments aimed at some of the earliest cellular changes that these diseases have in common. This new understanding comes from her recent research showing there are similarities in the lead-up to different forms of macular degeneration that might lend themselves to shared treatment approaches.

It’s good news, because shared therapies might be less costly to develop and use than separate therapies for each disease subtype, and could possibly be more effective at earlier stages.

Singh is using her 2015-18 Macular Degeneration Research (MDR) grant to study the role of different cells in the eye that are affected in age-related macular degeneration (AMD).

What makes her lab’s work stand out, in particular, is that it replicates early aspects of macular degeneration in cell models created from living cells of adult humans. Whereas earlier forms of stem cell research relied on cells from embryonic tissue, this 21st century variation, called human induced pluripotent stem cell (hiPSC) technology, uses stem cells gathered from living adults, and then reprogrammed to differentiate into eye cells.  iPSCs can self-renew and differentiate into nearly all cell types in the body. In 2012, Shinya Yamanaka (Japan) and Sir John Gurdon (UK) won the Nobel Prize for their discoveries behind iPSC.

Now Singh and a group of international collaborators have reached a successful turning point in their hiPSC investigations. She and Chad Galloway, PhD, a postdoc in her lab, are senior and first author, respectively, on the shared report in the prestigious journal, Proceedings of the National Academy of Sciences (Galloway et al, PNAS, 2017). A dozen other researchers in the United States and Australia contributed to the work, including several additional MDR grantees. 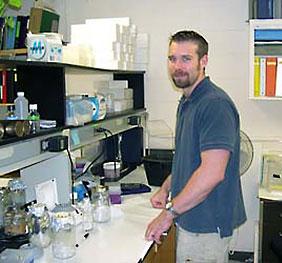 Dr. Galloway, a postdoc in Dr. Singh’s lab, is first author on the publication.
Together, they have shown that hiPSC are an excellent model for studying macular dystrophies, which are pathological conditions affecting the eye’s macula, or center of the retina which is responsible for highly focused vision.

Using hiPSC models, the researchers were able to replicate two early features of AMD: the development of drusen, and the accumulation of extracellular protein matrix, or ECM, in Bruch’s membrane, a layer of cells between the retinal pigmented epithelium (RPE) and the choroid layer filled with blood vessels. These two events—drusen formation and ECM accumulation--are considered to be hallmark signs of early macular degeneration. Results showed that similar molecular changes occur, even in RPE cells derived from patients with rare genetic macular dystrophies. This suggests that the disease plays out through shared mechanisms that could potentially be stopped by the same early treatment or cure.

The possibility that her research will one day contribute to cures is what drives Dr. Singh.  She grew up in India and originally pursued computer science in college and graduate school.

“When I switched from computer science to biomedical research, 10 years ago, I was not sure if I would be able to make a difference, but nonetheless, I was certain that this is what I wanted to do for the rest of my life,” she writes in her BrightFocus grant profile.

“Today, I know that I am on the right path and my work with patient-derived stem cells will one day lead to treatments and possibly cures for retinal and neurodegenerative diseases.