A major new breakthrough shows that L-DOPA, a drug widely used to treat Parkinson’s disease, may help protect against age-related macular degeneration (AMD). The discovery was made by a group of researchers led by Brian McKay, PhD, and just published in the American Journal of Medicine (Brilliant et al, 2015).

The research team, supported in part by BrightFocus Foundation, discovered a biological connection between darker pigmented eyes that are known to be resistant to AMD, and increased levels of a chemical called L-DOPA in those eyes. Since L-DOPA is frequently prescribed for Parkinson’s patients, the researchers wanted to know whether patients who received the drug L-DOPA as treatment for Parkinson’s or other diseases were protected from AMD.  By combing through massive databases of medical chart data, they reported that patients receiving L-DOPA were significantly less likely to get AMD, and when they did, its onset was significantly delayed.

The research findings are based on an analysis of the medical records of 37,000 patients at the Marshfield Clinic in Wisconsin.  Because the average age of those given L-DOPA is 67, while the average age of AMD diagnosis is 71, scientists were able to effectively track patterns.  These major findings were then confirmed by reviewing a data set of 87 million patients.  In this large scale data set, L-DOPA also delayed or prevented AMD from progressing to its “wet” form. 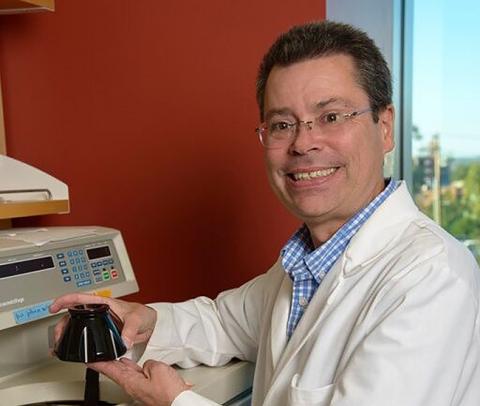 Brian McKay, PhD, led the investigation, which got started with his BrightFocus grant.
According to McKay, “we asked the question: ‘Are those taking L-DOPA protected from AMD?’ The answer was yes!  L-DOPA both prevented and delayed the onset of AMD.”

New Hope for an AMD Treatment

L-DOPA is available worldwide and goes by the generic name of levodopa. Brand names include Sinemet, Parcopa, Atamet, Stalevo, Madopar, and Prolopa.

Despite persistent, dedicated work by scientists, it has been longer than a decade since a new type of drug was developed for AMD, and scientists still do not understand precisely what causes it.  AMD remains a chief cause of legal blindness in adults over age 60.  While leaving peripheral sight intact (i.e. the edges of one’s visual field), it destroys the center. The resulting black hole makes people unable to drive, read, recognize faces and perform daily tasks.

The only measures currently available to stall and sometimes prevent AMD are the AREDS-proven vitamins for early AMD, and scheduled eye injections for the neovascular form, known as “wet” AMD.

McKay, a 2010-12 BrightFocus grantee, started working on the project at a time when investigators were realizing the huge importance of the retinal pigmented epithelium (RPE), a layer of cells next to the retina, to the retina’s health and survival.  McKay was looking for molecular pathways that regulate “trophic factors,” proteins associated with tissue nourishment and growth.

They discovered that one way the RPE cells help keep the retina healthy is with DOPA signaling through its receptor. In the body, protein molecules such as L-DOPA bind with each other through receptors, or docking stations that lie on cells.  Receptor binding is both the result of, and sets in motion, gene signaling. Actions and reactions of this sort direct most functions of the human body., and unlocking their secrets helps scientists uncover how a disease begins and progresses, and where it can be stopped.

For a long time it has been recognized that individuals with darker pigmentation have a lower risk for AMD; in the United States, African-Americans have a five-fold lower risk of AMD than Caucasians. This led researchers to postulate that signaling through the DOPA receptor may underlie racial disparities in AMD incidence. From there grew the hypothesis that people taking L-DOPA for other conditions would be protected against AMD.

“The obvious question was, if the L-DOPA no longer produced was supplemented via pill form, does it have the potential to serve as a preventive medicine against AMD?” commented Murray Brilliant, PhD, first author on the report, who directs the Marshfield Clinic Research Foundation Center for Human Genetics.

To test that hypothesis, these researchers first examined the health records of 37,000 patients at the Marshfield Clinic, comparing outcomes among patients who had AMD, or were taking L-DOPA for Parkinson’s or another condition, or both.  These researchers found that among people who got L-DOPA before being diagnosed with AMD, their AMD diagnosis occurred eight years later than those not taking L-DOPA.

These provocative findings were then confirmed in a much larger data set of 87 million patients, where similar results were observed. Next, the study was expanded to investigate the association between L-DOPA use and prevention and delay of “wet” AMD, the most devastating form of the disease. And once again, L-DOPA was found to be protective.

“Research points to this as a pathway to regulate and prevent this most common cause of blindness in adults,” Brilliant said. “We need more research, but this first step is promising.”

“Big data” research methods use customized computer programs to search through millions of electronic medical records and analyze their contents. This research method helped compare the analysis of the 37,000 Marshfield files with an exponentially larger pool of 87 million medical records.  This big data exercise confirmed the research team’s initial conclusions.

Commenting on the study’s methodology, Guy Eakin, BrightFocus vice president for Scientific Affairs, said the researchers groundbreaking accomplishments show how this new approach can, “quickly ask the scientific questions that had previously taken many years and millions of dollars.”

The next stage for the research team is to launch a clinical trial to further test the ability of L-DOPA to slow or prevent AMD.  Continued success of this hypothesis could lead to a new and life-changing example of what is known as drug repurposing or repositioning, in which scientists identify new uses for existing drugs.