The retinal pigment epithelium (RPE), a layer of cells under the light-capturing photoreceptors, plays a crucial role in the development of age-related macular degeneration (AMD).  In this project we will utilize stem cells engineered from tissue of living humans, known as induced pluripotent stem cells (iPSCs) to study how toxins derived from smoking lead to RPE damage through the activation of the immune complement system.  The use of iPSC technology to recapitulate certain aspects of AMD (ie, a “disease-in-a-dish” approach) offers a clear advantage over current models because we can derive tissues from AMD patients, which carry the genetic background of the disease.  This will allow us to directly investigate the immune complement system in genetic conditions of AMD, thereby providing a better understanding of disease mechanisms and the ability to test potential therapeutic interventions.

Our long term goal is to identify novel disease mechanisms to design new and effective therapies to treat and/or prevent AMD.  In this project we are investigating how toxins derived from cigarette smoke, lead to RPE cell damage through the activation of the immune complement system.

Scientific evidence has demonstrated that cigarette smoke is a major risk factor for AMD and that inflammatory-induced damage plays a central role in the development of the disease. Furthermore, the RPE, a single layer of cells under the light-capturing photoreceptors, is a primary cellular target affected in AMD. Under normal conditions, light and oxygen are essential for good vision; however, they may also damage the RPE and retina, if it weren’t for their natural repair and antioxidant mechanisms. On the other hand, aging and life style factors such as smoking decrease these repair mechanisms, leading to reversible or irreversible tissue damage. However, the mechanisms of RPE damage in AMD are still not fully understood, perhaps due to a lack of good AMD models that address the genetic background of individual patients.

The recent demonstration that adult cells can be genetically sent back to their embryonic stages (stem cells), together with methods to differentiate these cells into specific mature cell types, opened up new avenues to model and understand human diseases (iPSC techniques).  Thus, using iPSC-derived RPE cells from AMD patients and controls, we are investigating (1) the basic functional characteristics of iPSC-derived RPE cells from AMD compared with RPE cells from unaffected control patients; and, (2) the effects of smoke-derived oxidative stress, using these same cells, on cellular function and complement activation. In the first point we are characterizing iPSC and iPSC-RPE cells to explore whether there are intrinsic differences in cells derived from diseased and unaffected controls. We test this, for example, by checking for RPE-specific functions. Secondly, we are investigating whether those RPE functions, as well as levels of inflammatory-derived complement molecules, are altered before and after stressing these genetically unique iPSC-RPE cells with cigarette smoke.

The primary innovation in this project is the use of iPSC-RPE derived from AMD patients and controls to address whether there is an underlying genetic susceptibility for AMD. This approach of using genetically distinct patient-derived cells to model AMD in a dish may bridge the gap between clinical observations and the use of human cell lines and murine disease models. The benefits to be gained from these experiments are a better understanding of ways to model complex eye diseases, as well as a better understanding of disease mechanisms. This in turn will improve the accuracy of therapeutic drug screening and the generation of target-specific therapies for AMD. 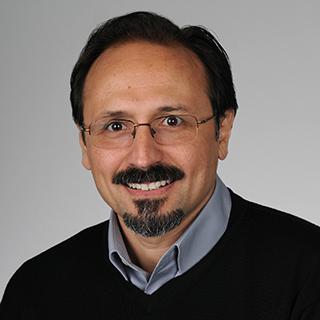