Age-related macular degeneration (AMD) is the leading cause of blindness among the elderly and currently there is no known treatment for early AMD. Therefore, we want to focus our studies on this early phase of AMD in order to develop prevention and treatment before this disease advances and causes dramatic vision loss. Our proposed studies are aimed at developing novel small molecules that could be tested as a therapy for early AMD. Such studies have great clinical significance since they can provide a novel therapeutic approach for the management of early AMD.

Age-related macular degeneration (AMD) is the leading cause of blindness in elderly; with the population aging, the negative health impacts and costs of the disease will increase dramatically over the next decade. While effective treatment has been developed for advanced wet AMD and intermediate, dry AMD, currently there is no treatment or prevention for early AMD. Due to the large number of patients with early AMD, a new treatment that targets early disease at a stage before vision is lost would have the greatest benefit.

We have shown a novel function for the bA3/A1-crystallin molecule, which to the best of our knowledge is the only protein identified to date that is an upstream regulator of a major pathway linking amino acid availability to cell growth and autophagy, the V-ATPase/mTORC1 signaling axis. This signaling axis affects the retinal pigment epithelium (RPE), a layer of cells providing support to retinal neurons. bA3/A1-crystallin regulates this signaling axis by binding to V-ATPase, which is an evolutionarily ancient enzyme with remarkably diverse functions, including to acidify a wide array of intracellular organelles to assist in autophagy.

The V-ATPase/mTORC1 pathway is becoming a target for therapeutic interventions in age-related diseases, making bA3/A1-crystallin a potential therapeutic agent in AMD. While rapamycin or rapalogs have shown potential therapeutic efficacy for age-related pathologies in animal models, significant side effects limit their use in humans, mainly because they inhibit mTORC1 directly. Since bA3/A1-crystallin is an upstream regulator of mTORC1 and does not interact directly with mTORC1, it will offer new and safer modes of treatment for AMD.

Understanding the topology of this binding will allow the rational design of agents that can affect the binding, thereby modulating signaling through the mTORC1 pathway and potentially providing a novel therapeutic approach for the management of AMD. 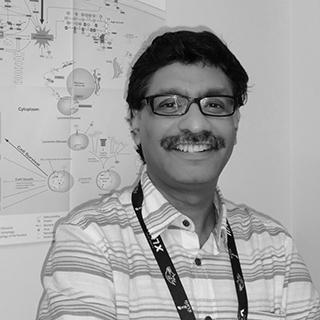