The goal of the project is to develop a novel therapy that can overcome the problems associated with the current anti-VEGF therapy for wet age-related macular degeneration (AMD), a leading cause of blindness in the elderly. Dr. Shusheng Wang’s team proposes that tiny pieces of genetic material called microRNAs could have a big role in AMD disease development and therapeutics. The advantage of microRNAs (miR-24 in this proposal) is that they can regulate multiple components of signaling pathways that are critical in contributing to the development of AMD. Therefore, these tiny microRNAs can potentially be used to treat complex diseases as AMD without having to perform extensive screening for small molecule drugs.

The goal of the project is to define microRNA mechanism in age-related macular degeneration (AMD) and develop novel microRNA-based AMD therapeutics. In general, RNAs are the cell’s instructions for making proteins, as delivered as messengers from each particular gene. MicroRNAs (or miRs) are small RNAs that don’t encode proteins, but repress the expression of multiple genes. Emerging studies suggest that miRs are novel therapeutic targets for complex diseases.

Dr. Wang’s team hypothesizes that microRNAs play an important regulatory role in the development of AMD and represent an attractive therapeutic target. Specifically, the team hypothesizes that microRNA miR-24 is a key regulator of actin cytoskeleton dynamics (i.e. the inner structural support of a cell); therefore, it plays a critical role in regulating multiple disease processes, including the angiogenesis (blood vessel growth), inflammation, and fibrosis (thickening and scarring of tissue) associated with choroidal neovascularization (CNV) in wet AMD.

In specific aim I, the mechanism of miR-24 function in angiogenesis and CNV are being defined. Experiments using cell culture and genetic mouse models of AMD are being performed to prove that miR-24 plays an important role in regulating angiogenesis in cell- and laser-induced CNV models. Moreover, the importance of miR-24 target proteins is being evaluated. In specific aim II, the role of miR-24 and its target proteins in inflammatory and fibrotic processes in CNV are being assessed. In specific aim III, the team is testing the therapeutic potential of miR-24 and developing a novel nanoparticle-based microRNA delivery system for AMD therapeutics.

Taken together, Dr. Wang’s study will form the basis for future microRNA-based AMD therapeutics in higher animals and humans. In contrast to the current drugs that target one protein or one mechanism, microRNA-based AMD therapy provides a unique “one-molecule, multiple-targets” model for disease treatment, which fits particularly well with the complex nature of AMD. 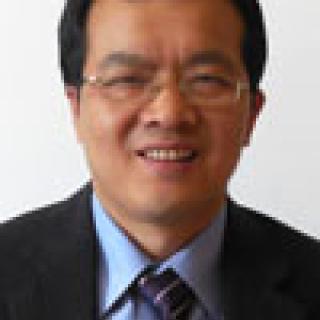