Aging is an important risk factor for age-related macular degeneration (AMD). Aging is also associated with an increase in tissue stiffness. Yet, whether and how progressive tissue stiffening contributes to the worsening of this debilitating and degenerative eye disease remains unknown. The aim of this proposal is to address this gap in knowledge by using an innovative and interdisciplinary approach, so that new and potentially superior treatments can be developed to treat this condition in the future.

In this project, we are investigating the hypothesis that aging leads to stiffening of blood vessels in the eye that, in turn, exacerbates the pathogenesis of age-related macular degeneration (AMD) by causing inflammation-mediated vascular degeneration.

To test this hypothesis, we are using a rhesus monkey model of early AMD. Rhesus monkeys are a unique model for the study of AMD, as they have a retinal structure closely resembling that found in humans. They also share the same AMD risk genes with humans, and form drusen (cellular and protein debris accumulating at the back side of the eye) as seen in humans with early AMD.

For the first of the two specific aims, we are collecting eyes from three groups of rhesus monkeys: normal young animals with no drusen; old monkeys with no drusen; and age-matched old monkeys with severe drusen. The choroidal vessels, which lie at the back of the eye and undergo degeneration in early AMD, are being isolated for assessment of stiffness and extent of degeneration. Since early AMD is characterized by local inflammatory changes in the choroid, these measurements are being correlated with the expression of key inflammatory markers in these choroidal vessels.

Although AMD commonly causes blindness in the elderly, only 10-15 percent of all AMD patients who develop the advanced “wet” stage benefit from current therapies, while no therapies exist for the more prevalent “dry” form. Thus, there is an unmet need to better understand and treat early AMD. We believe our research is both innovative and unique in that our aim is to address this need by using a unique rhesus monkey model of early AMD that closely recapitulates the disease in humans. In contrast to the conventional focus on the role of genetic and biochemical risk factors in AMD, we are investigating a novel hypothesis that implicates age-related vessel stiffening in choroidal inflammation associated with early AMD. This hypothesis is inspired by recent work, by ourselves and others, that has revealed a crucial role of vascular stiffening in the pathogenesis of other inflammation-mediated vascular complications, including diabetic retinopathy, atherosclerosis, and pulmonary edema.

We believe that our novel hypothesis and multidisciplinary approach will not only illuminate a previously unexplored territory in AMD research but, crucially, also identify new stiffness-associated therapeutic targets for more effective AMD management in the future. Further, we envision that our use of bioengineering techniques can be readily extended to the study of other vision-threatening eye diseases, such as diabetic retinopathy, glaucoma, and retinal vein occlusion. 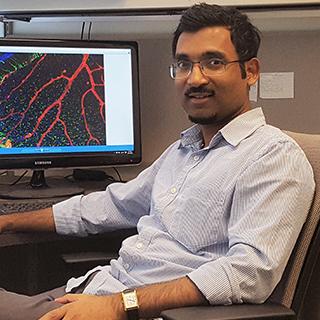