Age-related macular degeneration (AMD) is one of the leading causes of blindness in the world but its genetics is still unclear. Most of the DNA variations in AMD patients are found outside of the genes, and it is extremely hard to know whether these variants are actual mutations and what genes they affect. We have found that some of these variants are located in genome regions conserved down to the zebrafish, and surrounded by the same neighborhood of genes as in the human genome. Their preservation in the zebrafish  allows us to visualize in this transparent genetic vertebrate model whether these variants are just neutral or if they disrupt the regulation of one the neighbor genes, possibly revealing the actual gene affected in AMD human patients.

The genetics of AMD is not completely understood. Human genetic studies have identified novel DNA variations in the genome associated with AMD, but most of them are not located within gene protein-coding regions, making their study a challenge. It is extremely difficult to demonstrate that such variants are actual mutations affecting genes, as they could simply be random DNA changes that have a neutral effect. Thus it is critical to functionally analyze and sort out actual mutations from a cloud of random variants unrelated to the disease to find the root cause of AMD.

To identify such mutations, we compared the 80 vertebrate genomes available so far and identified variants located in non-coding regions highly conserved through evolution. In that manner, we have unmasked a potential non-coding mutation located in a highly conserved DNA element associated to the COL8A1 gene.

Our objective is to determine whether this mutation is involved in AMD by (1) understanding the functional consequences of this genomic variation on expression of COL8A1 and/or its neighbor genes, and (2) investigating photoreceptors and RPE cell survival, retinal and choroidal angiogenesis, structure integrity of the choroid/Bruch’s membrane, and the quality of the vision, in organisms with the COL8A1 mutation.

This study will not only identify the actual impact of this non-coding human mutation relative to AMD, but also characterize how the evolutionarily conserved DNA region bearing the mutation in human regulates its surrounding genes, including COL8A1, in the eye, potentially leading us to the identification of the actual gene responsible for AMD in this region of the genome. 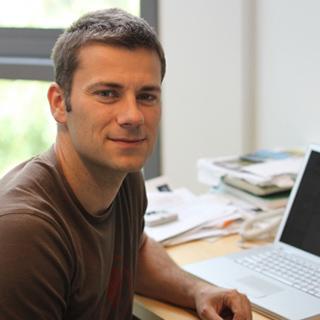