Aparna Lakkaraju, PhD Board of Regents of the University of Wisconsin System

The specific aims outlined in this proposal will provide a cell biological understanding of the role of a protein called apolipoprotein E and the regulation of cholesterol levels in the retinal pigment epithelial (RPE) tissue of the eye). We will also investigate the potential of two promising drugs, statins and PPARgamma agonists, which are currently being used to treat, respectively, atherosclerosis and diabetes. These drugs will be tested for their ability to maintain cholesterol balance in the RPE.

It is now becoming increasingly apparent that many chronic age-related diseases such as atherosclerosis, Alzheimer's disease, and macular degeneration share common pathological characteristics. One such characteristic is the abnormal metabolism of cholesterol as a result of defective functioning of proteins involved in this process. For example, genetic variations in apolipoprotein E (ApoE), which transports cholesterol into and out of the cell, have been associated with Alzheimer's disease and age-related macular degeneration (AMD). Another protein called sterol regulatory element binding protein (SREBP) controls the levels of the low density lipoprotein (LDL) receptor on the cell surface and the synthesis of new cholesterol. Thus, SREBP helps control the amount of cholesterol in the cell.

Our goal is to understand the functioning of ApoE and SREBP in cells of the retinal pigment epithelium because previous data from our lab shows that these cells lose the ability to handle cholesterol under conditions that mimic those found in AMD. Our results have the potential to ascertain whether drugs like statins, which activate SREBP and are widely used to treat atherosclerosis, can also help maintain proper cholesterol metabolism in the retinal pigment epithelial (RPE), which may, in turn, help treat or prevent AMD.

In this project, we aim to:

1. investigate the role of ApoE in the RPE, especially with regard to how genetic variations in this protein affect its function; and

2. investigate the activation of SREBP and regulation of the LDL receptor and statin function in the RPE.

Aparna Lakkaraju, PhD Board of Regents of the University of Wisconsin System 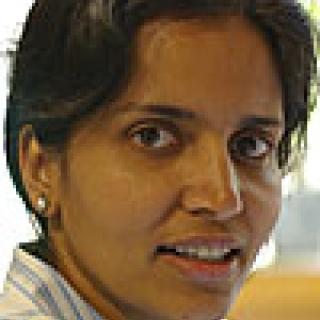