Humor and Tradition at ARVO

ARVO is made up of 12,750 vision and ophthalmology researchers from more than 80 countries (and growing). They're an eclectic group of clinical and basic researchers, including MDs, PhDs, and other degrees (optometrists, osteopaths, veterinarians, and scientists at the master's and undergraduate levels).

The annual meeting has grown, and is now held in some of the largest convention halls around the country. But people speak fondly of the days when a much smaller crowd met annually in Sarasota, FL, and "you got kicked out if you weren't wearing shorts," remembers BrightFocus Vice President of Scientific Affairs Guy Eakin.

There's still a bit of a lingering Hawaiian shirt tradition. Many attendees dress sharply for a big presentation and otherwise scale back to shirttails—the better to absorb the jam-packed five days' worth of scientific content.

Another tradition is that of wearing ribbons on your badge. ARVO provides these to help attendees sort themselves out, including to prepare for that dreaded occasion when a grant runs out. See nearby. 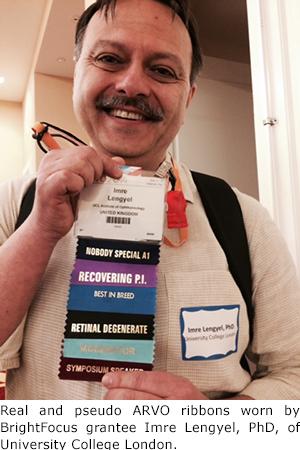 Along with its dress traditions, ARVO has its own etiquette. One never interrupts an intense science-related conversation going on in front of a poster board (although people standing next in line have been viewed rolling eyes when their patience wears out). To challenge someone's research findings, wait until the end of a session and do so in a thinly-veiled, polite, and well-rehearsed question that actually is a pretext for presenting your own findings. (Yeah, no one interrupts the speaker by shouting, “that's garbage!” It's just not done.)

By far, the biggest tradition here is to share knowledge and help one another out with scientific inquiry. That's practiced all the time as attendees hover in conversations that begin—and change—research directions. It's why everyone's here.

"One of the best parts of ARVO is the collaborative interaction. You form connections," says BrightFocus grantee Paul Knepper, MD, PhD, of the University of Illinois at Chicago. A past Thomas R. Lee award recipient, he is uncovering a new disease pathway and screening methods for glaucoma (more about that later).

"A person from Argentina wants a new way of observing rats. A person from Iowa wants to apply it to mice. A person from industry also stops by," Knepper continued, describing interactions at poster sessions.

"ARVO's strength lies in the vast array of disciplines, personalities, and nationalities, all in a common meeting. It's a positive place. It's 'ARVOnic.'"

Hey, thanks for the new word! That's exactly what's needed to solve the world's vision problems.