Skip to main content
Back to Research News
Diet & Nutrition

BrightFocus-Led Panel Examines Impact of Lifestyle on AMD and Glaucoma

Looks at Research on Role of Diet, Exercise, Vitamins

The people who run the world’s largest vision research meeting, the Association of Research in Vision and Ophthalmology (ARVO), are always looking for a good idea. So when BrightFocus approached them about an innovative new session topic, they were all ears.

The resulting symposium, organized by BrightFocus VP of Scientific Affairs Diane Bovenkamp, PhD, was a “first ever” for ARVO.  Two hours were devoted to the evidence behind lifestyle interventions for both AMD and glaucoma, focusing on the benefits of exercise, nutrition, and dietary supplements. 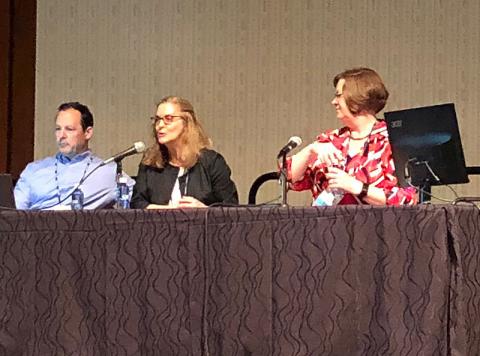 These lifestyle modifications may be a way to increase blood flow and nourish our eyes, extending their vitality into old age. However, sorting through the evidence can be confusing, and the goal of this seminar was to “shed a hard light on the evidence, and to inform future actions and research in these areas,” Dr. Bovenkamp promised.

She gave an introductory talk (abstract published in the scientific journal IOVS) and moderated the event, along with Adriana Di Polo, PhD, of the University of Montreal, who’s a member of BrightFocus’ National Glaucoma Research (NGR) Scientific Review Committee, and David Calkins, PhD, a past NGR grantee who’s on the faculty at the Vanderbilt University Medical Center.

The audience of 500-plus scientists heard from the world’s top experts like Emily Chew, MD, of the National Eye Institute (NEI). She’s a leader of the landmark federal Age-Related Eye Disease Studies (AREDS I and II) which led to the AREDS “eye vitamin” regimen for early-to-moderate AMD.

Dr. Chew addressed the interaction between diet and genetics in AMD.  While there’s no one gene that “causes” AMD, several dozen loci, or parts of genes with irregular coding, have been associated with AMD susceptibility.

One study assessed the AREDS regimen in combination with a modified Mediterranean diet (high in vegetables, fruit, legumes, whole grains, nuts, and fish; and low in red and processed meats, alcohol, and saturated fats).  Overall this dietary pattern was associated with a reduced risk of progression to advanced AMD; however, results in genetically susceptible individuals were not conclusive (Seddon et al, American Journal of Clinical Nutrition, 2015).

Dr. Chew called for additional studies, and is designing additional NEI research in this area.  She reminded the audience that AMD “is a complex genetic disease” that is subject to many lifestyle influences besides diet. Smoking and a sedentary lifestyle are known to increase risk and their impact, along with dietary interventions, needs to be studied in people with genetic susceptibility.

Louis Pasquale, MD (Harvard), talked about gene-environment interactions and how they potentially can modify the risk of AMD and glaucoma. “Your genetics is not your destiny,” he said, quoting a famous geneticist and Harvard colleague, George M. Church, PhD.

Dr. Pasquale explained that a gene-environment interaction exists when a gene’s impact is magnified or downplayed in certain environments. An example he stressed is obesity, which has been traced to hundreds of genes in humans. So far, obesity has evaded scientific attempts to find a “silver bullet” cure, and yet there is plenty of data showing how body mass index gene variants and obesity can be modified by lifestyle. “This knowledge could be a powerful tool” in motivating people to adhere to a healthy lifestyle,” he said.

The same lessons may apply once we discover gene-environment interactions in AMD and glaucoma, Dr. Pasquale speculated.  Future discoveries may furnish “powerful insights into ophthalmic disease and can lead to cost-effective primary prevention measures,” he said. (Needed: more genetics researchers to focus on the eye and take up this challenge!) Currently he’s collaborating on an NGR grant in this area to Tobias Elze, PhD (Harvard).

Julie Mares, PhD (U Wisconsin-Madison) has been at the helm of large studies assessing the impact of diet on AMD and glaucoma. She reviewed evidence from her research and others showing that diet impacts both.

In AMD, the working hypothesis is that nutrients such as vitamin C and E, carotenoids (including lutein and zeaxanthin), and zinc, all help to protect against the oxidative (ie, cell-imbalancing) damage to the retina from cumulative, lifelong stressors. These stressors include exposure to light itself over a lifetime; changes in energy metabolism; immune cell dysregulation and overactivity (leading to inflammation); and diminished levels of cell maintenance (eg, recycling and “taking out the trash”).

In glaucoma, dietary interventions are less studied. However, there is recent evidence that foods high in nitrates (eg, dark, leafy greens) act as a physical “shield” for the macula by maintaining pigmentation. Also, there appears to be a higher risk of glaucoma in individuals with poor vitamin D status.  This connection between vitamin D availability and health has been seen in other diseases, and needs to be studied.  It might be particularly important in individuals living in extreme northern or southern hemispheres, who do not consume food sources of vitamin D (such as fish, egg yolk and fortified milk), Dr. Mares said. “In winter there is inadequate ultraviolet B light to catalyze the synthesis of this nutrient in the skin.” 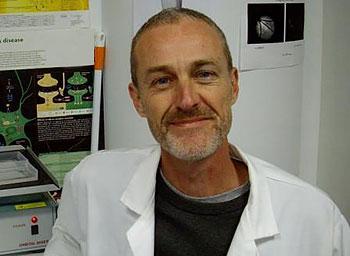 Ian Trounce, PhD
Throughout his career, Ian Trounce, PhD (University of Melbourne, Australia)  has focused on what makes older eyes vulnerable to glaucoma. He takes a special interest in mitochondria, the small structures that serve as constantly firing power plants within cells. Dr. Trounce is a past NGR grantee and his lab is the “home base” for several additional NGR grantees.

All neurons, including retinal cells, expend large amounts of energy, and it can be a strain for cells to keep up with those needs over time. Mitochondria produce 90 percent of the chemical energy that cells need to survive. To do so, they effectively burn “food” carried in blood. Without enough oxygen to perform this function, they stop working; and with too much oxygen, they become overwhelmed and create “free radicals” that are disruptive to cells.

Dr. Trounce speculates that some glaucoma subtypes may have a genetic phenotype of mitochondrial dysfunction.  His lab is exploring whether exercise and caloric restriction (which is also used in other degenerative diseases, like Alzheimer’s) may help.

Research by another speaker, Simon John, PhD (Jackson Labs), and colleagues, has shown that mitochondrial dysfunction in glaucoma may be driven in part by a reduction in retinal levels of nicotinamide adenine dinucleotide (NAD+) a key molecule involved in cell energy and oxygen metabolism. NAD+ levels decrease with age, rendering aging neurons more vulnerable.  Their study in an animal model showed that retinal NAD+ levels can be increased through oral administration of vitamin B3, which is a precursor (or building block) of NAD+,  and/or through gene therapy to increase expression of a key NAD+-producing enzyme (Williams et al, Science, 2017). In animals, these interventions helped prevent and treat glaucoma.

2015-17 NGR Grantee Vicki Chrysostomou, PhD (Centre for Eye Research Australia, and University of Melbourne) studies whether exercise provides any sort of defense to the optic nerve in glaucoma models. Her co-principal investigator (PI) on the project is Jonathan Crowston, PhD. Dr. Chrysostomou’s podium talk described their animal experiments, which showed that post-injury exercise (running and swimming) provided functional protection to the optic nerve following an acute pressure-induced injury. However, beyond a certain threshold, too much forced exercise lessened benefits and could possibly be harmful.  Protection of the Injured Optic Nerve with Forced and Voluntary Exercise in Aged Mice: Can There be Too Much of a Good Thing? (ARVO 2018 Abstract No. 2616)

Dr. Du also had several posters on retinal metabolism in animal and cell models. In an experiment directly related to his BrightFocus project, he deleted a specific protein involved in mitochondrial functioning, which caused a disruption in photoreceptor function and metabolism.

Trever McGill, PhD (Casey Eye Institute, Oregon Health and Science University), is a 2017-19 MDR grantee studying nutritional factors in the development of AMD. The typical American diet is low in carotenoid compounds like lutein and zeaxanthin, which are part of the AREDS vitamin regimen (see Emily Chew presentation, above). Carotenoids act as antioxidants to protect the retina, and they also supply macula pigment (eg, coloring), which is believed to filter light and protect against damage to macular cells. Dr. McGill and collaborators hypothesize that macular pigmentation correlates with other measures of retinal health, and are using advanced imaging techniques to measure its density. In one experiment, they found that the density of macular pigmentation varied in normal primates fed the same life-long controlled diet, and decreased similarly with age across their lifespans. These findings will serve as the baseline for exploring additional variables, including available lutein/zeaxanthin in retinal tissue, and possible genetic and biochemical explanations for differences in pigment density.  In a related abstract, Dr. McGill and Paul S. Bernstein, MD, PhD (University of Utah) and Martha Neuringer, PhD (Oregon National Primate Research Center), who are collaborators on the BrightFocus MDR project, and others, describe their pioneering microscopic technique for isolating and measuring carotenoid compounds in the eye.