Investigating the Role of TREM2 T96K in Alzheimer’s Disease Pathogenesis

This project aims to comprehensively characterize the role of the TREM2 T96K mutation using the 5xFAD mouse model of Alzheimer’s disease to facilitate the design of potential therapies.

We previously showed that the AD-associated T96K mutation in the ligand-binding domain of TREM2 markedly increased binding to TREM2 ligands and activation of TREM2, suggesting T96K is a gain-of-function mutation. While TREM2 loss-of-function mutations have been studied, no studies have yet been reported showing the effects of TREM2 gain-of-function mutations in mouse models of Alzheimer’s disease (AD). Using our novel Trem2 T96K knock-in (KI) mouse model crossed with the 5xFAD mice, we will investigate the functional consequences of the AD-associated TREM2 T96K mutation in vivo. The proposed study will provide critical insight into the role of the TREM2 T96K mutation in Alzheimer’s disease (AD), which may offer personalized AD treatment strategies depending on TREM2 genotype. In addition, our study will greatly extend our understanding of TREM2 functions in AD and facilitate the development of therapeutics targeting TREM2 and neuroinflammation for AD treatment.

Investigating the Role of TREM2 T96K in Alzheimer’s Disease Pathogenesis 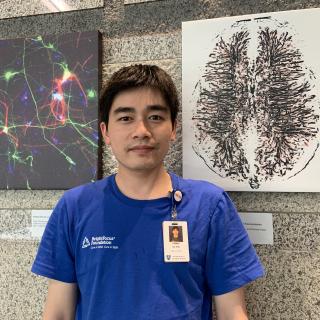