Research scientist at UCLA in the Molecular Biology Institute 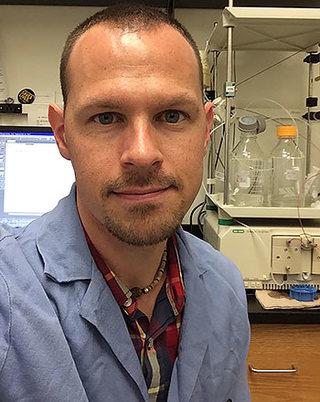 Paul Seidler, PhD, is a research scientist at UCLA in the Molecular Biology Institute, working as a senior-level postdoctoral fellow in the laboratory of Dr. David Eisenberg, a leader in structural biology of amyloid-related diseases.

Paul earned his bachelor's and master's degrees from Buffalo State College where he studied chemistry and biology and worked as a teaching assistant in the Chemistry Department.

There, he discovered a passion for basic research, and an appreciation for mechanistic and structural biology. Paul earned a PhD in structural biology from the University at Buffalo at the Hauptman-Woodward Institute.

There he studied molecular chaperones, a special type of protein that helps other proteins in the cell "fold" into active shapes. At UCLA Paul continues research in this realm, seeking to correct protein misfolding that leads to toxic effects in Alzheimer's disease (AD). Paul determined several atomic resolution structures of a protein called tau, whose misfolding is thought to contribute to progressive neurodegeneration in AD. Guided by these structures, Paul has designed therapeutic molecules that will target and neutralize misfolded tau assemblies. Much of Paul’s current focus is on developing the candidate drug molecules he designed for therapeutic use in humans.