University of California, Los Angeles researcher Paul Seidler, PhD, is working toward a greater understanding of the tau protein’s role in the development and spread of Alzheimer’s disease (AD).   Seidler’s work, funded by a grant from BrightFocus’ Alzheimer Disease Research program, is one of two Los Angeles area projects supported by a new partnership between BrightFocus and Alzheimer’s Los Angeles. 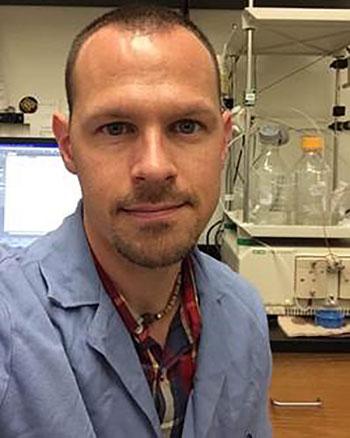 With a grant jointly funded by BrightFocus ADR and AlzGLA, Paul Seidler, PhD of UCLA (a postdoc in David Eisenberg’s lab), has shed light on toxic tau conformations in Alzheimer’s. The work is newly published in Nature Chemistry.
Ever since tau’s role in Alzheimer’s and other neurodegenerative diseases was discovered, scientists have been working to find out what drives the molecular changes that make it toxic to neurons. Many scientists consider tau’s influence over AD to be equal to or greater than that of amyloid beta (Aβ) protein. While its toxic conversion and accumulation in tau tangles occurs at a later stage than that of Aβ plaques, about the time that Alzheimer’s symptoms appear, tau tangles are associated with rapid progression.

Seidler, writing in a recent paper in the prestigious scientific journal Nature Chemistry, shed light on the chemical structure of tau protein, including how it changes in AD to form slender fibers known as “fibrils” that gather and form tau tangles in the brain. Importantly, there’s also experimental evidence suggesting it might be possible to inhibit tau’s conversion.

The overarching aim of Seidler’s project is to develop methods and agents that block the formation and spread of toxic tau conformations. To do so, he’s investigating the atomic structures of the tau amyloid fiber core, then designing inhibitors that target the changing amyloid structure in toxic strains of tau.

“Thanks to  dedicated scientists who have worked for over a decade to understand the molecular basis of AD, I am fortunate to be nearing the cusp of what I believe will be a medical revolution, one in which an arsenal of therapeutic agents will soon emerge,” Seidler commented after receiving his grant. “BrightFocus Foundation has funded, and continues to fund, many of these scientists who were key in making these discoveries. With its support, I am excited to be in a position where I can now design and test strategies and agents to combat this disease.

How the Stage Was Set for Recent Discoveries

Seidler works in the lab of David Eisenberg, PhD, a distinguished research faculty member at UCLA and senior author on the Nature Chemistry report. The Eisenberg lab has long focused on why normal proteins convert to a toxic state in prion diseases, amyloidoses, and tauopathies, causing neurodegeneration and dementia.  The lab also studies whether these diseases are transmissible from cell to cell or among organisms.

Tau is a protein that, in its “normal” state, helps to stabilize microtubules, or tubular structures that act as conveyor belts to move essential particles around in cells (things like mitochondria and chromosomes). One of tau’s main functions is to reinforce the stability of axonal microtubules. Axons are the long tails of neurons that connect with other neurons to build a communications network over which brain signals travel.

In 2005, the Eisenberg lab was among the first to provide a description of the atomic-level structure forming the spine of an amyloid fiber, describing it as a tightly constructed “steric zipper.” The strength and stability of its molecular structure are what gives tau its ability to form different shapes, the team theorized. They also envisioned a prion-like role for toxic strains of converted tau, suspecting them of seeding additional tau conversion (Nelson et al, Nature, 2005).

The new discovery by Seidler et al also draws upon the steric zipper concept; they describe how any tau molecule can bind two others by virtue of these zippers. Once interfaced with each other in this way, segments of tau create an interlocking structure that could possibly represent the start of fibril formation and spread to other neurons. In all, three different zipper structures were discovered.  Seidler used a cutting-edge technique called cryo-electron microscopy to image these nanostructures within tau molecules.  Earlier this year, the Nobel Prize in chemistry was given to the scientists who developed cryo-electron microscopy, which uses samples frozen at liquid-nitrogen temperatures.

In addition to describing the new zipper-like structures in tau, Seidler et al designed and tested inhibitors that target the parts of tau, known as VQIINK and VQIVYK, that are known to promote tau aggregation. The team used their new structure of the peptide sequence VQIINK as a blueprint to design inhibitory agents.  In biosensor cell lines developed by a former BrightFocus grantee, Marc Diamond, MD, the UCLA team found that one of their inhibitors effectively blocked the spread of tau aggregation which is thought by many to drive the progression of AD.  The authors are now extending their analysis to include all-important brain tissue samples donated from people who had Alzheimer’s.

It remains to be seen how many changing forms toxic tau can take, and whether there’s a common pathway to inhibition. Eisenberg has said he is hopeful that the inhibitor they’ve developed, by targeting multiple zipper interfaces, may be effective against several tau strains. A start-up company he co-founded is working to develop their top compound for further investigation and testing. The hope is that someday it will reach the clinic as a medicine that can protect against Alzheimer’s deadly tau tangles.