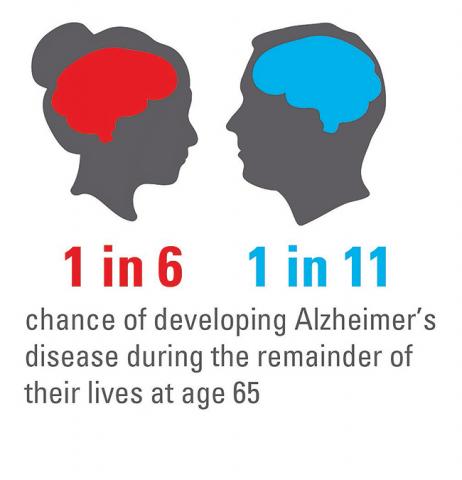 New research is shedding light on what drives the vast gender disparity in Alzheimer’s – men have a 1 in 11 chance of developing the disease, but yet for women the odds are 1 in 6 even when accounting for their longer life span.

Supported by a grant from BrightFocus Foundation’s Alzheimer’s Disease Research program, a team of scientists at the University of Luxembourg has discovered that a particular gene could be an important clue to dramatic gender differences in the rate and expression of Alzheimer’s disease.  According to lead scientist Dr. Enrico Glaab, the gene may help identify targets for anti-Alzheimer treatments in the future.

The researchers report that a gene, ubiquitin-specific peptidase 9 (USP9), appears to provide some protection against the disease in men through its interaction with another gene that helps regulate tau proteins. Tau, like amyloid-beta (Aβ), is a protein that is present in the normal-functioning brain, but found in higher levels in the Alzheimer’s brain.

The team found that blocking the USP9 gene significantly reduced the activity of the tau gene. From this evidence comes the hope that USP9 could be an effective target for future therapies.  While encouraging, more research is needed before it will be possible to develop anti-Alzheimer’s drugs based on this principle.

Dr. Glaab and his lab pursued this research after winning the 2013 Global NeuroDiscovery Challenge, supported by the Geoffrey Beene Alzheimer’s Initiative, 21st Century Brain Trust, WomenAgainstAlzheimer’s Network, and BrightFocus Foundation (grant no. C2014002). The research is also sponsored by the Luxembourg Fondation Wivine.