Leading the Way to Health Equity Through Better Alzheimer’s Data

In the U.S., racial and ethnic disparities in diagnosing and treating Alzheimer’s disease is a national priority. Blacks and Hispanics are at increased risk for Alzheimer’s compared to non-Hispanic whites, yet data shows that these groups are less likely than whites to be diagnosed with the condition.

A recent article coauthored by BrightFocus Vice President, Scientific Affairs Diane Bovenkamp, PhD, proposes a new way to narrow these racial and ethnic disparities in Alzheimer’s research through the development of standardized electronic health records. This would allow clinicians to collect and share real-world data about Alzheimer’s and related dementias across diverse population groups including race, ethnicity, and geography.

“Standardizing electronic health records to improve the accuracy, speed, and diversity of patient recruitment could be a game changer in efforts to achieve equity toward better Alzheimer’s prevention, detection, and treatment,” Dr. Bovenkamp said.

SHRD was modeled after a similar open-source standard health record for oncology— mCODE™ (short for Minimal Common Oncology Data Elements), where one of the founding collaborators was The MITRE Corporation, which is now the driving force behind the creation of SHRD (including the paper’s corresponding author, Dr. Elaine Swift). Since its launch in 2018, mCODE has been adopted by leading health systems and electronic health record vendors to improve overall cancer data quality for patient care and research.

The article, “Standardizing Electronic Health Record Data on AD/ADRD to Accelerate Health Equity in Prevention, Detection, and Treatment,” was published in the Journal of Prevention of Alzheimer’s Disease. Its coauthors include scholars from Johns Hopkins University School of Medicine (including lead author and BrightFocus grantee Dr. Kostas Lyketsos), the LEAD Coalition (Leaders Engaged on Alzheimer’s Disease), the Alzheimer’s Drug Discovery Foundation, and the Banner Alzheimer’s Institute/University of Arizona College of Medicine.

Dr. Bovenkamp, along with some of her co-authors and representatives from the Centers for Medicare and Medicaid Services, Epic, GenomeX, CodeX, and Vanderbilt, will present the article’s findings and lessons learned from prior efforts to standardize cancer, cardiovascular disease, and genomic data at a virtual panel discussion presented by the Alzheimer’s Association International Society to Advance Alzheimer’s Research. The webinar takes place on Nov. 1, 2022; register now. 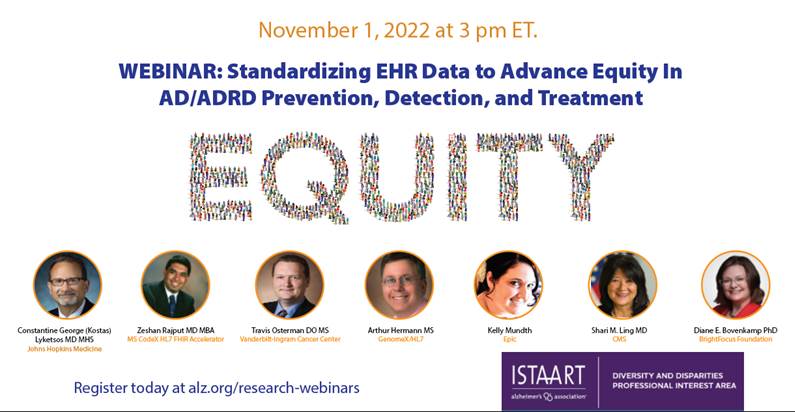