Innovative Alzheimer’s Project is (Literally) Out of this World 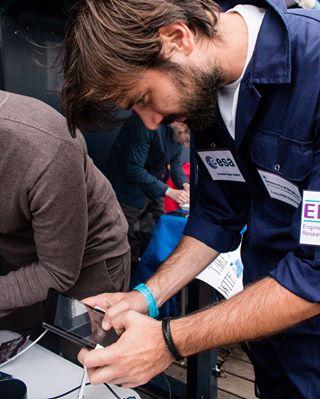 Cosmonauts with the European Space Agency (ESA) spent some of their free time recently to help to find a cure for Alzheimer’s.

Three cosmonauts participated in EyesOnALZ, a BrightFocus-funded research project that is the first-ever citizen science project dedicated to ending the disease. The online game, Stall Catchers, enables people all around the globe to help analyze data in a Cornell University Alzheimer’s study.   Each month EyesonAlz has been accomplishing what would otherwise take six months in a lab.

According to project director Pietro Michelucci, PhD, of the Human Computation Institute, the ESA cosmonauts visited the EyesOnAlz booth at the recent British Science Festival.

"Members of the European Space Agency honored our global effort to work toward an Alzheimer's treatment by playing Stall Catchers,” says Michelucci.  “It's heartening to see that people who spend time among the stars still have their feet planted firmly on the ground.”