Detecting Alzheimer’s at the Molecular Level

Medicines to slow or stop Alzheimer’s, when they arrive, will need to be taken right out of the starting gate. That’s why advances in diagnosis are so important. 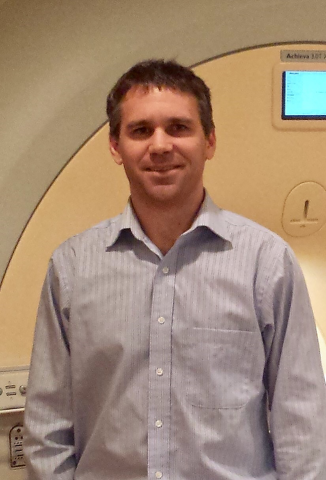 Click here to learn more about BrightFocus ADR grantee Francis Hane, PhD, who’s applied his knowledge of biophysics to detecting Alzheimer’s at earlier stages.
At Lakehead University in Thunder Bay, Ontario, Francis Hane, PhD,  a 2015-17 fellow in BrightFocus’ Alzheimer’s Disease Research program, is ahead of schedule on his project involving a new magnetic resonance imaging (MRI) technique that will permit molecular imaging of chemical changes predictive of Alzheimer’s up to 10 years before symptoms begin. “Currently, brain imaging of Alzheimer`s patients only confirms a diagnosis, whereas our approach seeks to predict a future diagnosis allowing for earlier treatment,” Dr. Hane said in describing the project’s aims.

The Lakehead team has reported early success in refining this modality and using it for imaging within the blood vessels of a living rat. The breakthrough was published in Scientific Reports on January 20, with Dr. Hane as first author. “Our work is an important first proof-of-principle demonstration that HyperCEST imaging is possible in complex biological environments,” the authors wrote.

In addition, Dr. Hane and others will be making presentations on the project at the upcoming annual meeting of the International Society for Magnetic Resonance in Medicine in April.

Every day brings new knowledge that Alzheimer’s is not just one disease, but many. And another hopeful aspect of this work is that biosensors, like the ones Hane et al are working on, will not only be capable of detecting early Alzheimer’s pathology, but also of informing about disease phenotype. That information then can be used to choose therapies with the best chance of success. That means that this project and others like it, as they move ahead, will provide the kind of imaging-based support that personalized medicine requires to end Alzheimer’s and other devastatingly complex diseases.