Did you know there are common connections between eye and brain diseases?  Alzheimer’s disease (AD), age-related macular degeneration (AMD), and glaucoma all are “neurodegenerative diseases,” meaning that disease processes can lead to damage and eventually cause a loss of function or kill the nerve cells of the eye or brain.  The result can be side or central vision loss in glaucoma or AMD, or the gradual onset of memory loss and dementia seen in Alzheimer’s.

BrightFocus – which is currently funding nearly 200 science projects around the globe through its three programs: Alzheimer’s Disease Research, Macular Degeneration Research, and National Glaucoma Research – is leading the way to explore the common neurodegenerative features to bridge what was once thought of as disparate fields of science, leveraging the learnings of one disease to better inform and help another.

“We want to break down barriers so science can move faster. The growing prevalence of these diseases – and their staggering human and financial toll – make it imperative to do this,” says Diane Bovenkamp, PhD, Vice President for Scientific Affairs at BrightFocus.

Most recently these common connections were explored in a major international symposium that was conceived, sponsored and co-led by BrightFocus.  It took place as an official, pre-conference, full-day satellite workshop held in conjunction with the 14th International Conference on Alzheimer’s & Parkinson’s Diseases (AD/PD) held earlier this year.

Abraham Fisher, PhD, AD/PD’s 2019 president, was a strong proponent of the event, whose goal was to bridge research knowledge of brain and vision scientists, spark new collaborations and interdisciplinary innovation, and accelerate progress towards improved treatments and cures.  For several decades, Dr. Fisher has been involved with drug design and discovery focusing on innovative treatment strategies in related neurodegenerative diseases of the central nervous system. He is co-founding chairman and president of the AD/PD international conferences.

"Common Features of Neurodegenerative Diseases:  Exploring the Eye-Brain Connection and Beyond,” was actually the second such offering, a follow-up to the highly successful inaugural workshop with the same focus that took place at the AD/PD 2017 international conference. The 2019 workshop brought together 18 internationally-renowned scientists to present for an audience of over 200 researchers.  The symposium was co-organized by Bovenkamp, Todd Golde, MD, PhD, University of Florida, Gainesville, Adriana di Polo, PhD, University of Montreal, and Guojun Bu, PhD, Mayo Clinic, Jacksonville.  The latter three were official co-chairs of the workshop, and also serve on scientific review committees for BrightFocus’ Alzheimer’s Disease Research and National Glaucoma Research programs, identifying the most promising investigator-initiated ideas submitted to the foundation. 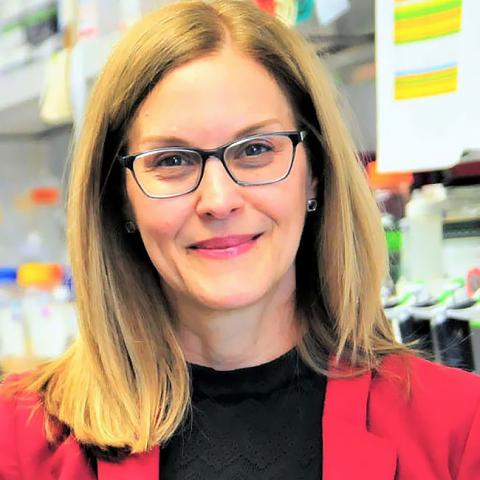 Adriana di Polo, PhD (U Montreal), was another co-organizer, along with Drs. Bu, Golde, and Bovenkamp (pictured above).
“BrightFocus is a recognized leader in this new lane of interdisciplinary scientific collaboration, and it’s exciting to help bring researchers together to accelerate innovation,” said co-chair Dr. Bu, adding, “Diseases this complex can’t be solved in a silo.”

The program looked at burning issues that unite diseases of mind and sight, and also the lingering barriers to progress towards cures.  Age is the single biggest risk factor that unites all three diseases of Alzheimer’s, AMD, and glaucoma.  Humans are living longer, and by the end of seven or eight decades (or longer), there can be an accumulation of wear-and-tear on the nerves and supporting cells of the eyes and brain, which could lead to development of disease. Scientists are finding common biological and biochemical features to these three diseases, including problems with waste clearance, inflammation, damage to blood vessels, abnormal protein deposits, and other contributing factors. Lessons learned from tackling one disease could lend a hand to accelerating a solution to combating another.  Thus, the 2019 symposium had panels of distinguished scientists to discuss three major themes: 1) ways of improving neuroprotection and lessons learned from other strategies of treatment; 2) how to recapitulate the "real-world" disease with better models; and 3) how do we improve our understanding of the impact of co-morbidities and lifestyle choices on the risk of developing disease.

As one example of a presentation from the first panel looking at lessons learned from other strategies, University of Pennsylvania scientist Steven E. Arnold, MD, talked about his research repurposing diabetes drugs to tackle the brain metabolic and energy-deficiencies that can occur in Alzheimer’s. Dr. Arnold described his BrightFocus-funded research that looked at whether a common diabetes drug known as metformin might re-sensitize insulin receptors in the brain, helping the brain meet its energy needs through more efficient glucose uptake. 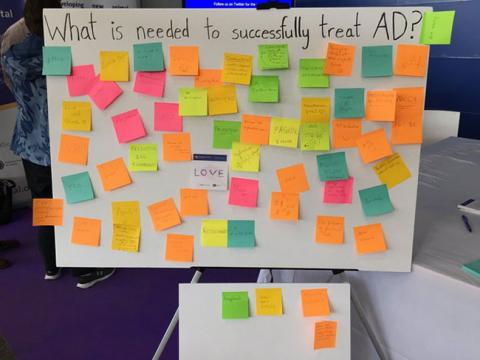 The AD/PD meeting is one of the world’s top science forums. Some of these creative ideas for solving Alzheimer's may also pertain to neurodegeneration in the eye (eg, AMD and glaucoma).
Genetics – and gene therapy – is another growing field that holds huge potential for fighting neurodegenerative diseases in the future. For all three diseases, there can be both genetic susceptibility and resilience, and researchers are looking for ways to manipulate those factors. One way to do that is by understanding how genetic risks vary in different populations.  In the third panel of scientists, a current BrightFocus grantee, Catherine Kaczorowski, PhD, of Jackson Laboratories in Bar Harbor, Maine, shared her success story about creating a mouse model that better reflects the type of real-world genetic diversity seen in humans, and thus is expected to be a tremendous resource in studying Alzheimer’s.

In the first panel, Dr. Daniel C. Chung, DO, MA, Global Medical Strategy Lead in Ophthalmology at Spark Therapeutics, Inc, gave a stunning presentation about the first successful gene therapy treatment for an inherited retinal degenerative disease. In essence, researchers were able to replace a ‘bad’ copy of a gene called RPE-65 with a ‘good’ copy, and helped people who were blind to see again. The RPE-65 protein is one of the components that convert light into a nerve electrical signal that gets detected by the brain. This gene therapy treatment is now available on the market, and the hurdles these researchers jumped over to cure a vision disease can be directly applied to future gene therapy treatments for Alzheimer’s disease and related dementias, and other vision diseases, like AMD and glaucoma.

However, gene therapy won’t work on later stages of the disease, where many eye and brain cells may have died. A scientist from the second panel, Rachael Pearson, PhD, at the University College London, presented her research on transplantation of photoreceptor cells into the retina, reporting that the cells are successfully accepted and integrated, with improvement in light-detecting function in animal models of blinding diseases. Since the light-detecting photoreceptors are a type of nerve cell, lessons learned from this eye research can be applied to potential replacement of the brain cells that die in Alzheimer’s.

The third panel of scientists focused on lifestyle and the influence of other conditions that could lead to increased risk for Alzheimer’s, AMD, and glaucoma. Beyond age and genetics, neurodegenerative diseases are linked to a wide array of intertwined factors that may relate, in part, to lifestyle (diet, exercise, stress, sleep, and emotional and physical health), and also to preexisting health conditions, like heart disease, high blood pressure, and diabetes. The best way to treat the disease is to avoid it altogether, thus there is an immense interest in preventive studies. Sleep, for example, is important because it literally helps “cleanse” the brain by removing waste and toxins, and this process is facilitated during deep non-REM sleep, the type that people get less and less of as they grow older. A distinguished member of the third panel, David Holtzman, MD, PhD, of Washington University School of Medicine, St. Louis, and co-chair of the BrightFocus Scientific Review Committee for the Alzheimer’s Disease Research program, has directed research in this area and shared findings from his own lab and those of other BrightFocus grantees. Lack of sleep has been linked to an increase in the levels of beta-amyloid and tau – both proteins that are hallmarks of Alzheimer’s disease and lead to problems with nerve cell function and communication. In short, sleep is good for fending off many different diseases.

The attendance at this year’s workshop, and the caliber of faculty and participants, all point to the importance of the topic and growing interest in  exploring common connections between eye and brain diseases.  In a one-day workshop of this type, collaborations are sparked and valuable knowledge is shared.   Now, with two successful workshops of this type accomplished, BrightFocus is already making tentative preparations to hold another at the 2021 AD/PD meeting.  Says Dr. Bovenkamp:  “We hope many of the same faculty and participants will be there to report on what innovation and creative collaborations have occurred in this space in the intervening two years, bringing us closer to common understanding and cures in neurodegenerative diseases of mind and sight.”