The Pioneering Work of Randall Bateman and Colleagues

Many of the world’s leading neuroscientists are firm in their belief that amyloid-beta (Aβ ) plaques are central to Alzheimer’s disease (AD).  And at least one of them, BrightFocus ADR grantee Randall Bateman, MD, is convinced that we aren’t learning enough from our current methods of plaque detection.

Bateman is the Charles F. and Joanne Knight Distinguished Professor of Neurology at Washington University School of Medicine in St. Louis. His primary research focus is on rare early-onset (before age 65) forms of AD that are largely inherited. Although these types make up less than 1 percent of all AD, researchers gain knowledge about more prevalent forms of late-onset AD by studying inherited types.

He acknowledges that current detection methods – PET scans, cerebrospinal fluid (CSF) testing, and blood tests – represent huge advances that make it possible to see Alzheimer's pathology in living patients. However, for this scientist, they don’t provide enough information about the “dynamics” of Aβ plaques, meaning how they change over time. 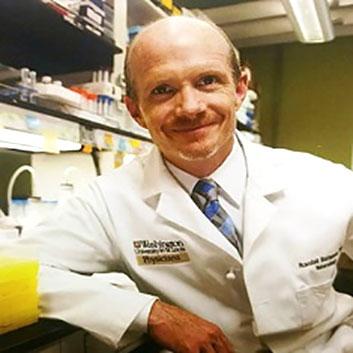 Randall Bateman, MD
For example, they don’t distinguish among new versus previously existing Aβ or other proteins that are deposited onto plaque surfaces.

That led Bateman to design and seek funding for his current BrightFocus grant project aimed at developing a new technique that will more precisely measure how quickly amyloid-beta (Aβ) plaques grow and where they locate in the Alzheimer’s brain.  To do this, Bateman and his team have developed a research tool that combines stable isotope labeling kinetics (SILK), which consists of injecting a special dye into brain tissue that adheres to new plaques, with nanoscale secondary ion mass spectrometry (NanoSIMS), a type of imaging capable of measuring changes in plaque deposits at the nanometer level. By comparing results in AD brains with those of normal brains, Bateman believes the study will shed light on the impact that plaque behavior has on AD development and spread, and help guide future treatment approaches in terms of timing, frequency, and whether one anti-amyloid drug is apt to be effective or more are needed to attack changing plaque composition.

At present, the team’s research using the SILK–SIMS technique is limited to post-mortem tissue provided by donors.  Nonetheless, results are expected to impact therapeutic strategies for living patients, including drugs that work in different ways to target plaque growth and resorption.

“Critical to the development of therapeutics that may treat and even cure AD is an understanding of the dynamics (the change over time) of certain proteins that are a likely cause of AD in the human brain,” Bateman writes in his grant profile on our website.

These researchers hope that one day, SILK-SIMS can be applied to additional toxic protein deposits, including tau, Lewy bodies, alpha-synuclein, and prions. They expect that will provide insights into the pathology behind AD subtypes such as Lewy body disease and frontotemporal dementia, as well as other neurodegenerative diseases, such as Parkinson’s and Creutzfeldt-Jakob.

Already one of most respected Alzheimer’s researchers in the world, Bateman another research “hat,” as principal investigator of the Dominantly Inherited Alzheimer Network (DIAN) observational study. This NIH-funded study was established a decade ago and currently has 531 participants worldwide. Through DIAN, researchers are evaluating people who are genetically destined to develop AD, and attempting to determine the sequence of changes in the brain from an early point, when participants are asymptomatic, throughout the remainder of their disease. Findings are shared in a central research database and tissue repository.

Just recently, knowledge gained from DIAN and other early Alzheimer’s studies was featured in the October-November 2018 issue of Brain & Health, a patient magazine published by the American Academy of Neurology.  In it, Bateman comments on progress so far.

“We've learned quite a bit from the families with any of the genetic mutations,” says Dr. Bateman. “We now know that patients develop the amyloid plaques about 15 to 20 years before they develop symptoms and about five to 10 years before the brain begins to shrink and have trouble using energy.”

The five to 10 years he refers to, or the period between the growth of Aβ plaques and the start of AD symptoms, represents what many think is the optimal window to treat AD and change its trajectory. That, in part, is what’s driving Bateman on his BrightFocus project, the need to get a more precise fix on how plaque changes over time, and where those changes lead in terms of disease progression and severity.

In 2012, Bateman’s leadership of DIAN took a gigantic leap, from hypothetical to a “real-world” endeavor. That’s when Bateman received a large NIH grant to launch the DIAN trial unit (DIAN TU) study, the first prevention trial for at-risk families with dominantly inherited AD.

Among other things, DIAN-TU is testing amyloid-blocking agents and immunotherapies now in development to see whether, by limiting or reversing the accumulation of Aβ plaques, that might delay or prevent the course of AD  in individuals who are otherwise destined to get the disease.  Reports of the first findings from DIAN-TU are expected in at the end of 2019.

It’s easy to see how more precise measurement and knowledge of plaque growth and change over time will increase what is learned from the DIAN-TU prevention trial. And it might even have an impact the chance of treatment success in individual patients.

Thus, while the measurements they’re after may be small, the cause behind the effort of Bateman and colleagues to develop their SILK-SIMS technology, is very large. By supporting this innovative undertaking, BrightFocus could have a major impact on people with inherited AD, and eventually on people with any form of AD and other types of neurodegeneration.