BrightFocus 2013-14 grantee Crystal Miller, PhD, and her mentor, Bruce Lamb, PhD, both of the Cleveland Clinic, along with Taylor Jay of Case Western Reserve University, are coauthors on a new report that describes the surprising—even counterintuitive—role that a genetic trait associated with the immune system might play in Alzheimer’s disease (AD).

Their research was published this week in an early online report and will appear in the March issue of the Journal of Experimental Medicine (JEM), with Lamb as senior author. Miller and Jay, a graduate student, share credit as first authors, responsible for the bulk of the research behind the report, which was conducted in Lamb’s laboratory.

Miller and Jay also presented their preliminary findings before a packed audience at the Society for Neuroscience (SfN) meeting last fall in Washington, DC.

TREM2: A New Player on the Alzheimer’s Stage 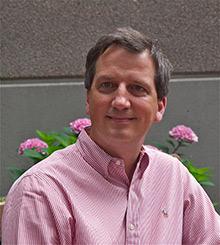 In recent years, there’s been only limited headway with the “amyloid hypothesis,” ie, the idea that increased levels of amyloid beta and tau amyloid proteins, on their own, are sufficient to tip the scales and cause otherwise benign plaques and tangles to turn lethal. In light of this, researchers have looked for other factors that might cause “good” amyloid to turn “bad.” It’s been hypothesized that one such trigger might be inflammation, and that the immune system may be involved in Alzheimer’s progression.

Lamb’s lab, and others, have investigated a genetic variant of an inflammatory factor known as triggering receptor expressed on myeloid cells 2, or TREM2. It confers dramatically elevated risk not only for AD, but other neurodegenerative diseases, including frontotemporal dementia, Parkinson’s disease, and amyotrophic lateral sclerosis (ALS). However, in some studies done in vitro (ie, cells in culture and not in a human or animal model), TREM2 served beneficial functions, including to promote phagocytosis (ie, encapsulation and removal of cellular “debris”), downregulate inflammatory cytokines, and encourage an anti-inflammatory response.

In their experiments, Lamb, Miller, and Jay examined what might happen when TREM2 is removed from mouse models with AD pathologies. Their recent paper describes these findings:

TREM2 deficiency has a restraining effect on amyloid pathology in a region-specific manner, lowering macrophage and neuroinflammatory activity (both of which are associated with formation of amyloid plaques and tangles) in the hippocampus, olfactory bulb, and thalamus, but having no significant effect on the brainstem and cortex, nor on levels of amyloid precursor protein (the building block of amyloid beta).

Another finding, a direct outgrowth of Miller’s and Lam’s BrightFocus-supported project, was that TREM2 cells in AD mouse models expressed high levels of inflammatory cells, known as macrophages, derived from peripheral monocytes (eg, cells triggered and imported from the immune system), as opposed to microglia, which are resident immune cells found in the brain. In other words, these inflammatory factors appeared to have been sent to the brain in response to immune signaling.  If this finding is replicated and confirmed, and indeed TREM2 exacts a response from the peripheral immune system, then it speaks volumes about the protection conferred by TREM2 deficiency, according to these authors. They speculate about mechanisms by which TREM2 deficiency might impede inflammatory activity in the brain and hypothetically inhibit the growth and/or toxicity of plaques and tangles, with some targets possibly attainable through the blood. Gaining control over these speculative mechanisms could have the power to retard Alzheimer’s disease and possibly other neurodegenerative disorders associated with TREM2.

“Regardless of the mechanism, our results demonstrate that TREM2 deficiency is protective against disease pathogenesis in AD mouse models,” Jay et al state. They go on to characterize their finding as “surprising” and “counterintuitive,” given the conflicting evidence about TREM2. These include the vitro studies showing that TREM2 reduces inflammatory factors and enhances anti-inflammatory activity, as well as other studies that have identified human TREM2 variants with a presumed loss of function that still promote AD pathogenesis. All this leads the authors to speculate that TREM2 is a complicated entity that may present in different phenotypes—or genetic patterns—requiring further study up ahead.

The puzzle created by these latest findings from the Lamb laboratory—and the ripples they caused in the field—were echoed during the first Keystone Symposium on Neuroinflammation in Diseases of the Central Nervous System, which drew 300 researchers to Taos, New Mexico, last month. The conference report paid major attention to TREM2 in a section entitled, “United in Confusion: TREM2 Puzzles Researchers in Taos.” Chris Glass, MD, PhD, of the University of California, San Diego, an organizer of the event, said the contradictory findings surrounding TREM2 are likely to benefit the field by providing a “teachable moment.”

“As researchers learn more about this receptor, they will likely reveal fundamental realities about which aspects of neuroinflammation are protective, and which are harmful,” he said.

Front and center at the Keystone event was Taylor Jay from Lamb’s laboratory, who presented the group’s findings as reported in JEM. Additional BrightFocus collaborators presenting there included David Holtzman, MD, of Washington University of St. Louis (WUSTL), a member of the BrightFocus Scientific Review Committee, who was a collaborator in other TREM2 research by Colonna et al at WUSTL. He discussed future plans to investigate whether TREM2 and ApoE4 (another genetic trait that increases one’s risk for AD) may act through similar lipid-related pathways to increase the chances of getting AD.

Another speaker was current BrightFocus grantee Gary Landreth, MD, of Case Western, who has collaborated with Lamb et al. His driving hypothesis is that Aβ interferes with microglial phagocytosis (or debris removal), culminating in Alzheimer’s disease. Landrith has received funding from BrightFocus to conduct an early-stage clinical trial in humans testing bexarotene, a retinoid X receptor agonist, as an AD treatment approach. In his past research leading up to the trial, Landreth found that bexarotene boosted phagocytosis and cleared plaques in mouse models of AD and also improved cognition.

BrightFocus is grateful to be part of this developing story and to be  contributing to the science behind neuroinflammation and inflammatory modulators—important new areas of Alzheimer’s research. Puzzles like this one surrounding TREM2 have great value because they encourage collaboration and original thinking, and ultimately inspire new approaches that provide necessary clues. The generosity of our donors does so much to encourage this discovery process.