“I wish they had something like this when I was a graduate student!”

The comment came from a veteran Alzheimer’s researcher, now a faculty member at a prestigious medical school. He was talking about the BrightFocus Alzheimer’s Fast Track®workshop.

Fast Track is BrightFocus’ signature effort to support talented researchers who are just starting out in the Alzheimer’s field.  Aimed at graduate students and post-docs in early lab positions, the three-day workshop is their opportunity to learn from the best.

In three days’ time, Fast Track immerses them in the latest research, provides hands-on training in grant writing and presentation skills that are necessary to obtain funding and land jobs, and equips them with a network of friends, mentors, and potential collaborators.

The most recent Fast Track was held just prior to the annual Society for Neuroscience (SfN) meeting in San Diego. SfN brings together some 28,000 neuroscientists worldwide, and holding Fast Track in the same location makes it cost-effective for many research labs to send new investigators to both meetings.

At this year’s Fast Track, world-renowned experts delivered updates on the latest trends and hot topics in Alzheimer’s research. Highlights of the program included talks on the link between Alzheimer’s and Down syndrome, and why collaborative research is important (by age 40, most people with Down syndrome develop full-blown Alzheimer’s disease); sex differences affecting AD risk; the impact of exercise on the brain at the cellular level; CRISPR gene editing and new stem cell technologies being applied to AD; and where things stand with Alzheimer’s drug development and current clinical trials. And much more.

Interspersed with science are career development talks on everything from “elevator speeches,” to creating good slides and presentations, to avoiding early research pitfalls.  Attendees are assigned to teams and spend a few hours together writing mock grant proposals that are competitively judged at Fast Track’s end. 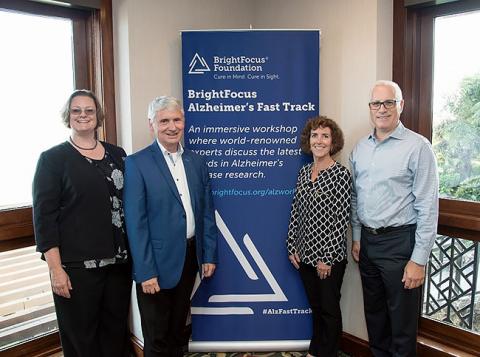 From left, Drs. Bovenkamp, Steinbusch, Lemere, and LaFerla
All recent Alzheimer's Fast Tracks have been planned by a trio of co-chairs who themselves rose up through the ranks of Alzheimer’s research. Frank LaFerla, PhD, dean of the School of Biological Sciences at the University of California, Irvine, developed some of the earliest animal models used to study AD in humans, models which are widely shared today.  Cynthia Lemere, PhD, is on the research faculty of Harvard Medical School, where she is investigating immune system involvement in Alzheimer’s disease and leading preclinical studies of antibody treatments.

Professor Harry Steinbusch, PhD, holds multiple appointments in cellular neuroscience, psychiatry, and neuropsychology at Maastricht University in the Netherlands, and is studying epigenetic changes to the brainstem and their link to problems that frequently co-exist with Alzheimer’s, such as depression. He is the one who first had the idea for Fast Track, and launched a partnership with BrightFocus that has lasted nearly two decades.

Joining them to plan each Fast Track event are BrightFocus Vice President of Scientific Affairs Diane Bovenkamp, PhD, and her staff.

At Fast Track, invited speakers turn into “faculty,” most of them staying for the entire three days, interacting with attendees, making themselves available as (unpaid) expert consultants for the mock grant proposals, and helping to judge them at Fast Track’s end.

One of this year’s speakers was Subhojit Roy, MD, PhD, professor of pathology and neuroscience at the University of Wisconsin (Madison). His lab is developing a CRISPR gene editing strategy to block production of toxic amyloid peptides in sporadic (ie, not genetically-driven) forms of Alzheimer’s disease. He gave a talk on theirs and other CRISPR gene editing strategies that may lie ahead.

Roy earned a special reputation as a “shark” because of his tough (but fair) questioning during the final session, when attendees defended their mock grant proposals. One of his comments set off a small and amusing Twitter storm.

Later, after the excitement died down, he shared his impressions about being on the Alz Fast Track faculty for the first time.

“I knew it would be a worthwhile experience,” he said.  “What I wasn’t expecting was to learn so much!”

[See a complete overview of the 2018 Alzheimer’s Fast Track speakers and topics. Watch a short video about Alzheimer's Fast Track.]

One of the reasons Alzheimer's Fast Track is so important is that it encourages a wealth of new perspectives in solving today’s greatest research challenges. The “holy grail” of Alzheimer’s research is to find a disease modifying treatment, meaning one that will slow or stop the disease.  Experimental drugs now in development are aimed at stopping amyloid build-up, ie, the plaques and tangles that litter the Alzheimer’s brain.  While this shows promise, emerging evidence suggests there are many additional factors besides plaques and tangles contributing to AD onset, and that no one treatment approach is likely to work for all. 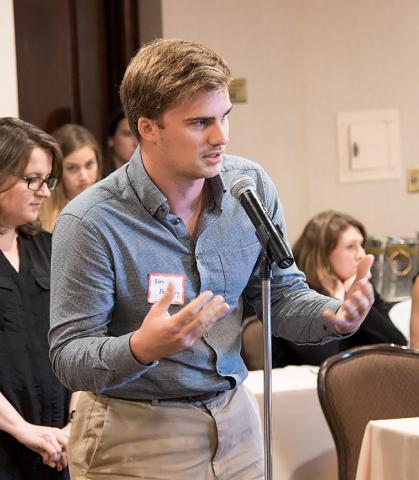 The hope is that all this exploration will take us in new directions to break down Alzheimer’s many secrets. Alzheimer's Fast Track helps make it possible, and likely, that more investigators will remain focused on the small breakthrough discoveries that will make a difference.