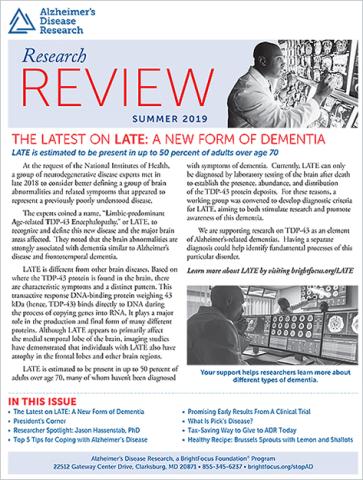 
The Latest on LATE: A New Form of Dementia

At the request of the National Institutes of Health, a group of neurodegenerative disease experts met in late 2018 to consider better defining a group of brain abnormalities and related symptoms that appeared to represent a previously poorly understood disease.

The experts coined a name, “Limbic-predominant Age-related TDP-43 Encephalopathy,” or LATE, to recognize and define this new disease and the major brain areas affected. They noted that the brain abnormalities are strongly associated with dementia similar to Alzheimer’s disease and frontotemporal dementia.

LATE is different from other brain diseases. Based on where the TDP-43 protein is found in the brain, there are characteristic symptoms and a distinct pattern. This transactive response DNA-binding protein weighing 43 kDa (hence, TDP-43) binds directly to DNA during the process of copying genes into RNA. It plays a major role in the production and final form of many different proteins. Although LATE appears to primarily affect the medial temporal lobe of the brain, imaging studies have demonstrated that individuals with LATE also have atrophy in the frontal lobes and other brain regions.

LATE is estimated to be present in up to 50 percent of adults over age 70, many of whom haven’t been diagnosed with symptoms of dementia. Currently, LATE can only be diagnosed by laboratory testing of the brain after death to establish the presence, abundance, and distribution of the TDP-43 protein deposits. For these reasons, a working group was convened to develop diagnostic criteria for LATE, aiming to both stimulate research and promote awareness of this dementia.

We are supporting research on TDP-43 as an element of Alzheimer’s-related dementias. Having a separate diagnosis could help identify fundamental processes of this particular disorder.

Prevent. Treat. Cure. Three ordinary words, but the best minds in the world are grappling with the enormity of the challenges when matched with the complexity of Alzheimer’s disease and the human brain. We’re grateful that you understand the importance of funding this critical research.

In this issue of Research Review, you’ll read about how scientists are working together to better understand how the brain is affected by the many variations of dementia, especially Alzheimer’s, and even how our diet can affect the brain.

Research holds our only hope of finding the answers we need to stop the Alzheimer’s epidemic. Until we have those answers, millions of families are struggling to help parents, grandparents, siblings, and spouses who are living with Alzheimer’s.

Just like us, the scientists who receive Alzheimer’s Disease Research grants also have family and friends affected by Alzheimer’s. They’re intent on finding a cure as dedicated professionals and also to help the people they love. We have a common goal and working together we can reach it and change the future for our children and grandchildren!

Thank you for your support. I hope you’ll visit our website often for the latest research updates and to access free, helpful information about Alzheimer’s.

The complex memory and thinking skills we use to function in everyday life fluctuate constantly due to fatigue, stress, and anxiety, making them extraordinarily difficult to measure. These fluctuations also increase as we age. Despite this, in Alzheimer’s disease studies, memory and thinking are tested in “one snapshot” in an unfamiliar place (usually a clinic or hospital exam room).

In hopes of having a more reliable and accurate assessment tool, Alzheimer’s Disease Research grantee Jason Hassenstab, PhD, Washington University, is developing smartphone-based cognitive assessments for use by older adults in global Alzheimer’s disease studies and clinical trials. Participants in the study take memory and thinking tests in short “bursts” requiring less than 3 minutes each to complete, which can be taken multiple times per day, providing a much more accurate and reliable understanding of how memory and thinking change in the very early stages of Alzheimer’s.

Dr. Hassenstab is the Cognition Core director for the Dominantly-Inherited Alzheimer Network-Trials Unit, and he created the Ambulatory Research in Cognition smartphone app already used in studies with younger age groups that are familiar with using smartphones. He is grateful for the opportunity provided by his Alzheimer’s Disease Research award to refine and improve the app for use with older adults in Alzheimer’s prevention studies.

More helpful resources for people living with Alzheimer’s disease are on our website: brightfocus.org/ADRresources.

Another indication that a healthy diet is important!

While many drugs are still in development to treat and prevent Alzheimer’s disease, researchers funded by Alzheimer’s Disease Research grants are also examining alternative approaches. Early results are promising in the first ongoing clinical trial to examine whether older adults with mild cognitive impairment or mild Alzheimer’s can adhere to a Modified Atkins Diet (MAD) and produce ketone bodies without other supplementation to improve memory functioning.

The state of ketosis is when the body metabolizes fat and produces ketone bodies, which can be measured in blood, breath, and urine. The classic “ketogenic diet” has long been used with remarkable efficacy in the management of drug-resistant epilepsy. Preliminary results indicated that if ketosis can be induced, there may be at least a temporary improvement in learning and memory. For people interested in learning more or participating in this clinical trial, please visit brightfocus.org/MADtrial.

Brussels sprouts are low in calories but high in fiber, vitamins, and minerals. Their high fiber content helps support regularity and gut health. Choose sprouts that are bright green and heavy for their size.

What Is Pick’s Disease?

“Pick’s disease” is the name given to one form of a larger group of diseases now called the frontotemporal dementias (FTD). It is the fourth most common cause of dementia and thought to account for about 5 percent of dementias. Among younger onset cases—those that begin before age 60—FTDs are the first or second most common cause of dementia. FTDs differ from Alzheimer’s disease in clinical presentation and pathology.

Clinically, Pick’s disease differs from Alzheimer’s in affecting personality before memory deterioration appears. Changes in personality can include poor social judgment, disinhibition, vulgarity, and restlessness. Some patients steal or show repetitive, compulsive behaviors. Many patients become irritable, agitated, depressed, or apathetic. Self-awareness can be very limited. Language is affected early, and eating behaviors are sometimes affected. Incontinence typically occurs earlier than in Alzheimer’s. A peculiar occurrence in some individuals is the development of artistic talents as the dementia progresses.

Although some cases proceed slowly, Pick’s disease usually proceeds more rapidly than Alzheimer’s, on average taking only four to six years from diagnosis to death. Patients with behavioral changes tend to pursue a more rapid course. Diagnosis is made on a clinical basis, although genetic testing can confirm some specific subtypes. There is no specific medication for FTDs, and some medications developed for Alzheimer’s may aggravate FTD symptoms.

Tax-Saving Way to Give to Alzheimer’s Disease Research Today

If you are 70 1/2 years old or older, you can take advantage of a simple way to benefit Alzheimer’s Disease Research and receive tax benefits in return. Gifts up to $100,000 from an IRA can be transferred directly to a qualified charity. The transfer generates neither taxable income nor a tax deduction, so you benefit even if you do not itemize your deductions. This means your gift can be put to use right away and you can see the impact your donation is making. Because this law no longer has an expiration date, you are free to make annual gifts this year and well into the future.

If you have not yet taken your required minimum distribution for the year, your IRA charitable rollover gift can satisfy all or part of that requirement. For more information, please call Charlie Thomas at 301-556-9397 or learn more by visiting our website at brightfocus.org/plannedgiving.