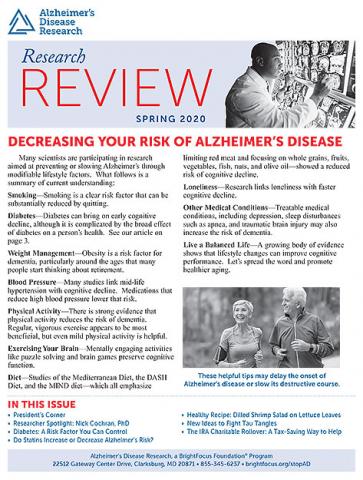 Decreasing Your Risk of Alzheimer’s Disease

Many scientists are participating in research aimed at preventing or slowing Alzheimer’s through modifiable lifestyle factors. What follows is a summary of current understanding:

Smoking—Smoking is a clear risk factor that can be substantially reduced
by quitting.

Diabetes—Diabetes can bring on early cognitive decline, although it is complicated by the broad effect of diabetes on a person’s health.

Weight Management—Obesity is a risk factor for dementia, particularly around the ages that many people start thinking about retirement.

Diet—Studies of the Mediterranean Diet, the DASH Diet, and the MIND diet—which all emphasize limiting red meat and focusing on whole grains, fruits, vegetables, fish, nuts, and olive oil—showed a reduced risk of cognitive decline.

Other Medical Conditions—Treatable medical conditions, including depression, sleep disturbances such as apnea, and traumatic brain injury may also increase the risk
of dementia.

You honor Alzheimer’s Disease Research with your trust. And we understand the sacrifice you make to support the critical research we fund, especially at a time like this, when our nation and the globe are facing the unprecedented challenges of the COVID-19 pandemic. That’s why all of us here—and the scientists you help fund—are deeply determined to carry on until we end this terrible disease.

With your help, we will leave no stone unturned as we push for new understanding and more treatments. As you’ll see in this newsletter, that includes extensive research on Alzheimer’s prevention through lifestyle choices. Simply by adapting certain healthier habits, almost everyone can begin reducing their risk of this
devastating disease.

Thank you for making this vital work possible. Because of you, I believe it is a matter of “when,” not “if,” we defeat Alzheimer’s. 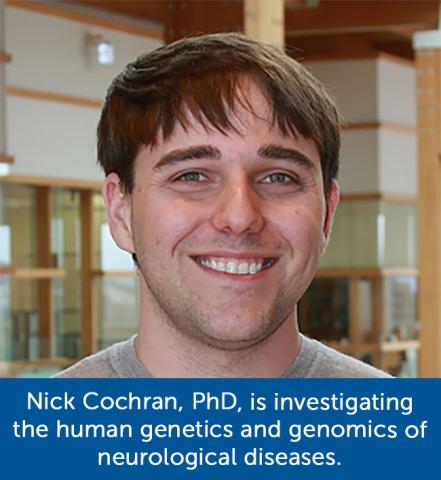 Nick Cochran, PhD, is a postdoctoral fellow at the HudsonAlpha Institute for Biotechnology working to find out how an important gene for Alzheimer’s disease called MAPT is turned on in neurons, the cells in the brain that control thinking. MAPT is the instruction set for a protein called tau. Tau causes problems in Alzheimer’s disease, and scientists think that reducing tau might be helpful as a treatment. Cochran says, “If we can figure out how MAPT is turned on in neurons, it might help us know how we could turn it off.”

Cochran became interested in neuroscience during his undergraduate years, as he saw the devastating effects of neurodegenerative diseases ripple through both sides of his family. He is grateful that, due to support from both the foundation and Alzheimer’s Disease Research donors, he will be able to contribute to understanding how MAPT, an important gene in many neurodegenerative diseases, is regulated.

Diabetes: A Risk Factor You Can Control

Among people with diabetes, the risk for developing Alzheimer’s disease has been found to be 65 percent higher than those who do not have diabetes.

Diabetes is known to damage the arteries that bring blood, with its supply of glucose and oxygen, to the brain. Interference with this source of nourishment is thought to increase the likelihood of brain deterioration.

Diabetes, too, is linked with an increase in systemic inflammation, an observation of increasing interest to researchers who note the link between inflammatory processes and dementia. Increased blood pressure and elevated blood fats (hyperlipidemia), often associated with diabetes, are known to increase dementia risk.

A brain-healthy lifestyle includes modifications of diet and physical activity that will decrease the risk of diabetes. Management of weight and diet earlier in life can also help. Not all cases of diabetes can be prevented, and effective disease management is important for overall health and to mitigate the risk of dementia.

Is it possible for a medication both to increase and to decrease dementia risk? In the case of statins, this can appear to
be true.

Statins are among the most frequently prescribed medications in the United States. Nearly one in three U.S. adults age 40 and older is prescribed a statin. There is evidence both for statin-associated brain protection and for statin-associated cognitive interference. The benefits linked with these medications are very important in fighting cardiovascular disease, which remains our leading cause of death.

In addition to their cardiovascular benefits, statins appear to modestly reduce the risk of developing Alzheimer’s and dementia. One investigation evaluated dementia and statin use among over 3,000 older adults every two years for an average of 6.1 years. The researchers concluded that statin use was protective against Alzheimer’s in adults under 65. However, statins appeared to slightly increase the risk in adults over 80.

A group of researchers from Denver tried to explain how statins could be helpful to some individuals and harmful to others. They note that statins, like other medications that affect metabolism in complex ways, act through more than one mechanism. Statins decrease cholesterol, and that may be an important reason for their cardiovascular benefits. Statin use reduces stroke risk and their cerebrovascular benefits may be important in reducing dementia. There may be additional effects beyond cholesterol reduction as well.

Dr. Paul Seidler at UCLA discovered the specific part of tau that forms the tangles which choke off brain cells in Alzheimer’s disease. Using this detailed information, Dr. Seidler tested peptides that “cap” the sticky part of tau to prevent tangles. Dr. Seidler and his colleagues are optimistic about the chances of these peptides being turned into drugs, though years of research and development will be necessary.

Because of the support of donors like you, Alzheimer’s Disease Research, a BrightFocus Foundation program, is proud to fund Dr. Seidler’s research as well as continue to support work on drugs that block the spread of tau in Alzheimer's disease.

Fundamental research like this, which uses cells grown in a lab to test ideas about how Alzheimer’s progresses, is the first place that future drugs are found. Although Alzheimer’s Disease Research is looking at how Dr. Seidler’s work could impact Alzheimer’s disease, there are many diseases that involve tau, which could benefit from his effort and expertise. UCLA, where Dr. Seidler works, has filed for patents based on his research as a first step towards creating new drugs.

The IRA Charitable Rollover: A Tax-Saving Way To Help

If you are 70 1⁄2 years old or older, you can take advantage of the IRA charitable rollover to benefit Alzheimer's Disease Research and receive tax benefits in return. You can give any amount up to $100,000 per year from your IRA without having to pay income taxes on the money. Advantages include:

To complete your gift, please call 301-556-9362 or download our sample distribution letter at brightfocus.org/IRA.