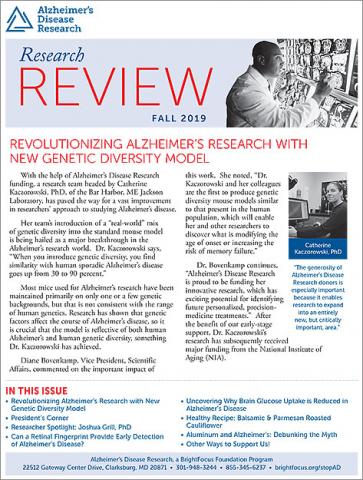 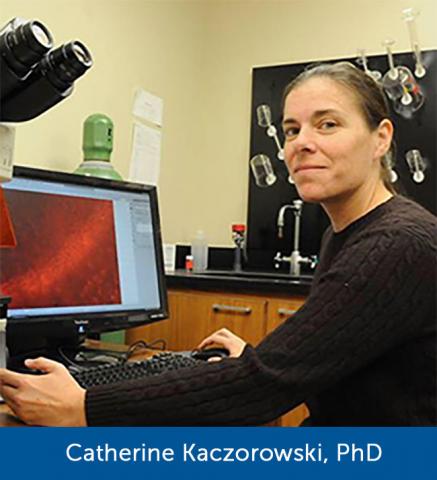 The generosity of Alzheimer’s Disease Research donors is especially important because it enables research to expand into an entirely new, but critically important, area.

With the help of Alzheimer’s Disease Research funding, a research team headed by Catherine Kaczorowski, PhD, of the Bar Harbor, ME Jackson Laboratory, has paved the way for a vast improvement in researchers’ approach to studying Alzheimer’s disease.

Her team’s introduction of a “real-world” mix of genetic diversity into the standard mouse model is being hailed as a major breakthrough in the Alzheimer’s research world. Dr. Kaczorowski says, “When you introduce genetic diversity, you find similarity with human sporadic Alzheimer’s disease goes up from 30 to 90 percent.”

Most mice used for Alzheimer’s research have been maintained primarily on only one or a few genetic backgrounds, but that is not consistent with the range of human genetics. Research has shown that genetic factors affect the course of Alzheimer’s disease, so it is crucial that the model is reflective of both human Alzheimer’s and human genetic diversity, something Dr. Kaczorowski has achieved.

Diane Bovenkamp, Vice President, Scientific Affairs, commented on the important impact of this work. She noted, “Dr. Kaczorowski and her colleagues are the first to produce genetic diversity mouse models similar to that present in the human population, which will enable her and other researchers to discover what is modifying the age of onset or increasing the risk of memory failure.”

Dr. Bovenkamp continues, “Alzheimer’s Disease Research is proud to be funding her innovative research, which has exciting potential for identifying future personalized, precisionmedicine treatments.” After the benefit of our early-stage support, Dr. Kaczorowski’s research has subsequently received major funding from the National Instituteof Aging (NIA).

One of the greatest obstacles in diagnosing and treating the symptoms of Alzheimer’s disease is that there is no way to predict who will develop the disease, and there’s no reliable screening method to identify it early. That’s why research from scientists like Carol Cheung—story on page 3— and her work to develop a retinal screening technique for early detection of Alzheimer’s heralds such promise.

I’m thankful for loyal friends and supporters like you, who enable Alzheimer’s Disease Research to fund projects like this one and others across the globe that have the potential to redefine the way we prevent, detect, and cure this lifealtering disease. While the scientists may have the vision and the drive, it is only thanks to your incredible generosity that they can access the necessary funding to complete
their work.

Thank you for your dedication and determination to help support promising research studies that continue to move us closer to defeating Alzheimer’s. 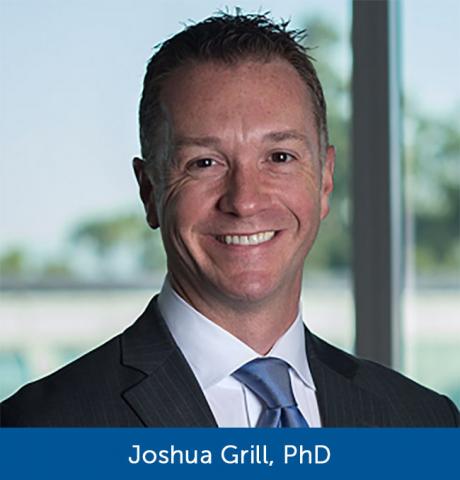 The single greatest barrier to advances in Alzheimer’s disease treatment is poor recruitment to clinical trials of promising therapies.

Most clinical trials now enroll patients with mild cognitive impairment, which in many cases may exist prior to full-blown dementia developing. The goal of Alzheimer’s Disease Research grantee Dr. Joshua Grill’s research is to identify the challenges to enrolling these patients in clinical trials.

Dr. Grill works at the University of California, Irvine, and his research is focused on clinical trials across the spectrum of Alzheimer’s disease. Through his research, he hopes to discern methods to improve recruitment to these critical studies in order to hasten advances in Alzheimer’s disease treatments and a cure.

In the study, patients diagnosed with mild cognitive impairment are being interviewed, along with their family members, to better understand their decision processes in two critical areas: 1) whether to undergo biomarker testing for Alzheimer’s disease and 2) whether to participate in clinical trials of investigational therapies.

Dr. Grill says, “I am thrilled that Alzheimer’s Disease Research and their donors have placed trust in my colleagues and me and agree the work we are doing will guide the field. It is an exciting and critically important time in the history of Alzheimer’s disease research, and we are honored to have this opportunity to contribute.”

Uncovering Why Brain Glucose Uptake Is Reduced In Alzheimer's Disease

With support from Alzheimer’s Disease Research (ADR), University of California, San Francisco scientist Alex Smith, PhD, is examining why the brains of people with Alzheimer’s disease are taking less glucose from the blood.

A healthy brain consumes large amounts of energy— nearly 10 times as much as other similarly sized regions of the body. In someone with Alzheimer’s disease, the supply of energy-rich sugar, or glucose, from the blood to brain is reduced. This study aims to investigate the reason for this difference from healthy individuals.

Blood vessels in the brain are surrounded by cells that contain a very large amount of a protein called aquaporin-4, which regulates the movement of water across a membrane. When Alzheimer’s is present, the amount of aquaporin-4 around vessels is reduced, and Dr. Smith and his team believe this causes the cells to swell around the vessels, limiting the ability of sugar to get into the brain.

His goal for this study is an improved understanding of why glucose uptake is reduced in the Alzheimer’s brain, which will facilitate the identification of novel targets for Alzheimer’s drug development. Some studies have suggested that dietary modifications aimed at reducing the brain’s demand for glucose can help preserve cognitive function in people with Alzheimer’s, and Dr. Smith’s team will help to clarify when dietary modification is appropriate.

Dr. Smith says, “The support provided by ADR will allow us to apply next-generation optical imaging techniques to study the development of pathology in Alzheimer’s disease. I am extremely grateful to the ADR donors for the opportunity to continue working in this most challenging and rewarding of areas.”

Can A Retinal Fingerprint Provide Early Detection Of Alzheimer's Disease? 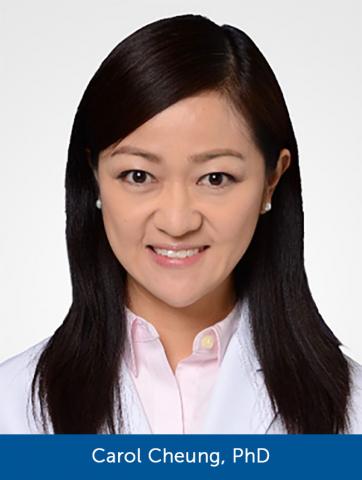 The sooner Alzheimer’s disease is diagnosed, the sooner physicians can begin early intervention, which current evidence suggests is more likely to prevent or delay cognitive decline. Yet no rapid, population-based screening techniques are currently available to diagnose early Alzheimer’s.

The eye, as an extension of the brain, is also affected by Alzheimer’s disease. Researchers have discovered that eyes from subjects with Alzheimer’s exhibit a structural pattern that may be used as a “retinal fingerprint” for early detection. In this study, an artificial intelligence technique will “learn” which characteristics of the retina image are found in individuals with dementia.

“My research is directed towards developing more targeted and effective screening strategies for early detection of brain diseases and prevention of blindness, using state-of-the-art ocular imaging technology,” says Dr. Cheung. “Such screening techniques hold immense potential to lead to impactful benefits for both science
and society.”

Dr. Cheung hopes that her research will lead to development of a retinal fingerprint technique that only requires a routine eye-check. There is tremendous potential that this could lead to an inexpensive, non-invasive and efficient method for identifying Alzheimer’s, providing a critical opportunity to begin treatment sooner.

* Tip: To prepare florets from a whole head of cauliflower, remove outer leaves. Then, slice off the thick stem. With the head upside down and holding a knife at a 45° angle, slice into the smaller stems in a circular motion—removing a “plug” from the center of the head that will be discarded. Break or cut florets into the desired size.

Aluminum And Alzheimer's: Debunking The Myth

One question that often comes up is whether exposure to aluminum can contribute to memory loss. There have been many studies about this in the last several decades, and inconsistent findings have led many researchers to abandon the aluminum hypothesis and determine that aluminum exposure is not an important risk factor for dementia in humans today.

Instead, more evidence suggests the greater importance of other factors such as:

For more information on how you can lead a healthier life through regular exercise and a nutritious diet, please visit brightfocus.org/healthyliving.

Other Ways To Support Us!

Did you know you can make a gift that will help lead the fight against Alzheimer’s disease and could even provide benefits for you? There are a variety of ways to include Alzheimer’s Disease Research in your estate plans that could enable you to earn a charitable income tax deduction.

Donor Advised Funds (DAF)
Put your dollars to work! Learn more and take advantage of our easy-to-use DAF direct feature on our website at brightfocus.org/DAF-ADR.

Stock
A gift of publicly traded securities owned for at least one year and that have increased in value can potentially save you both income tax and capital gains tax. Go to brightfocus.org/securities to learn more.

If you are interested in learning more about any of the above ways to give, you can contact Charlie Thomas at 301-556-9362 or plannedgiving@brightfocus.org. For more information regarding all the many ways you can leave a legacy of support, go to brightfocus.org/plannedgiving.