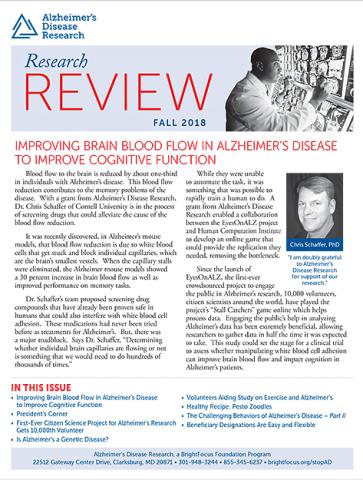 It was recently discovered, in Alzheimer’s mouse models, that blood flow reduction is due to white blood cells that get stuck and block individual capillaries, which are the brain’s smallest vessels. When the capillary stalls were eliminated, the Alzheimer mouse models showed a 30 percent increase in brain blood flow as well as improved performance on memory tasks.

Dr. Schaffer’s team proposed screening drug compounds that have already been proven safe in humans that could also interfere with white blood cell adhesion. These medications had never been tried before as treatments for Alzheimer’s. But, there was a major roadblock. Says Dr. Schaffer, “Determining whether individual brain capillaries are flowing or not is something that we would need to do hundreds of thousands of times.”

While they were unable to automate the task, it was something that was possible to rapidly train a human to do. A grant from Alzheimer’s Disease Research enabled a collaboration between the EyesOnALZ project and Human Computation Institute to develop an online game that could provide the replication they needed, removing the bottleneck.

Since the launch of EyesOnALZ, the first-ever crowdsourced project to engage the public in Alzheimer’s research, 10,000 volunteers, citizen scientists around the world, have played the project’s “Stall Catchers” game online which helps process data. Engaging the public’s help in analyzing Alzheimer’s data has been extremely beneficial, allowing researchers to gather data in half the time it was expected to take. This study could set the stage for a clinical trial to assess whether manipulating white blood cell adhesion can improve brain blood flow and impact cognition in Alzheimer’s patients.

Perhaps the most encouraging news in Alzheimer’s research is the speed at which new information is being gathered. The disease was first identified in 1906, the link to beta-amyloid wasn’t discovered until 1984, and two years later, tangles of tau were linked to the disease. But, thanks to advances in technology and technique, what’s been learned about the intricacies of Alzheimer’s has grown exponentially in just the last few decades.

I’m so grateful generous donors like you helped Alzheimer’s Disease Research provide critical funding to projects, like EyesOnALZ, which is accelerating that timeline even more. This innovative approach is the first-ever crowdsourced project to engage the public in Alzheimer’s research and is cutting data analysis time in half!

Thank you for being someone we can continuously count on to help accelerate promising studies to stop Alzheimer’s once and for all.

Alzheimer’s Disease Research, a BrightFocus Foundation program, is a key funder for EyesOnALZ, the first-ever crowdsourced project to engage the public in Alzheimer’s research. The project recently hit a major milestone by exceeding 10,000 volunteers, citizen scientists joining in to help speed up the time-consuming data analysis of stalled blood vessels in the brain.

Pietro Michelucci, PhD, EyesOnALZ project lead at the Human Computation Institute, said, “People of all ages and all continents are setting aside their differences and working together as one to fix a shared problem. This is humanity at its best.”

BrightFocus Vice President, Scientific Affairs Diane Bovenkamp, PhD, said, “EyesOnALZ is on the cutting edge of using citizen science – the power of the crowd – in biomedical research. This is an exciting moment and a reminder of how all of us can be a part of the search for a cure.”

EyesOnALZ participants play an online game, Stall Catchers, to help researchers who are examining how clogged segments of blood vessels, or “stalls,” in the brain are related to Alzheimer’s. A link between stalls and Alzheimer’s disease in mouse models has been pinpointed and some symptoms have been successfully reversed by reducing the number of stalls. More participants are needed and anyone with a laptop, smart phone, or tablet can sign up to play at brightfocus.org/eyesonalz.

Is Alzheimer's a Genetic Disease?

The genes encoded in our DNA are profoundly involved in many aspects of our health. Specific versions of genes, called alleles, are passed down through a family’s lineage and can create shared characteristics such as eye color or a heightened risk for a specific disease, such as Alzheimer’s disease.

Autosomal dominant is a term for a gene version that is so influential just one copy will dominate other factors. Alzheimer’s disease can be transmitted this way, but such direct transmission from parent to child is rare. An estimated one in twenty people with Alzheimer’s have the early-onset form, which is clinically apparent by age 60. Only a small percentage of these have developed the disease because of an autosomal dominant inherited gene version.

Much more common is late-onset Alzheimer’s (LOAD) where symptoms become apparent after age 60. In the case of LOAD, a number of genes have been identified as playing a role. The most important is the E4 version of the apolipoprotein gene, referred to as ApoE4. The E4 version is known to increase the risk of LOAD by a factor of 2 or 3. People who have two copies of E4 have a 12-fold risk. Apolipoprotein E is thought to interact with the accumulation and removal of the amyloid protein, but its exact role in Alzheimer’s is still being determined. Interestingly, the E2 version may increase resistance to the development of Alzheimer’s disease.

With support from Alzheimer’s Disease Research, Louisiana scientist Robert Newton, PhD, is conducting a clinical trial on the effects of physical activity on the dementia risk for older African Americans. In the study, participants take part in a range of physical and educational activities and their vital signs and cognitive skills are regularly measured and assessed. The aim is to improve attention and memory and reduce the risk of developing Alzheimer’s or other forms of dementia.

African Americans are twice as likely to develop Alzheimer’s as other groups. Newton wants to encourage greater engagement in research, “Clinical trials are incredibly important.There have been a number of clinical trials targeting prevention and treatment of Alzheimer’s disease, but the number of African Americans involved in these studies has been very low. If African Americans do not participate in studies, we will be less able to discover effective and targeted treatments. Participation in trials is extremely important.”

Newton’s interest was piqued early in his career when he learned about the lack of dementia research on African Americans and that this population experiences health disparities across a range of chronic diseases. The project became personal when Newton saw his mother experiencing cognitive decline. “As you can imagine, I have found new inspiration for my work: to find physical activity routines that will help stave off impending dementia for my mother.”

To learn more about participating in the study call Louisiana State University’s Pennington Biomedical Research Center at (225) 763-3000 or email clinicaltrials@pbrc.edu.

This series of articles promoting awareness of clinical trials is supported in part by an educational sponsorship from Biogen. BrightFocus is solely responsible for the content of this article. Learn about clinical trials in your area - visit brightfocus.org/clinicaltrials today.

*Note: Zoodles can be made using a vegetable peeler, paring knife, or spiralizer.

The Uses and Misuses of Antipsychotic Medications

This article is the second installment of a three-part series on the challenging behaviors associated with Alzheimer’s disease, including agitation, sleep disturbances, inappropriate behavior, and apathy. Antipsychotics are a controversial group of psychiatric medications often used to treat these symptoms, which accompany or even precede cognitive decline. These behaviors create most of the distress, difficulty, and danger involved in caring for people with Alzheimer’s.

The first antipsychotics were primarily dopamine blockers, which are important in fighting psychosis. Later medications blocked both dopamine and specific serotonin receptors, which enhanced the effectiveness of the medications. The newest antipsychotics have more complex effects on dopamine receptors and may assist in the primary treatment of major depressive disorder. However, the side effects of increased sedation, confusion, and fall risk may outweigh the benefits of using antipsychotics in older individuals.

Early investigations suggested that antipsychotic medications reduced agitation and psychosis in people with dementia. But, an objective, large, well-designed study (called CATIE-AD) found that the benefits of antipsychotics were smaller than originally thought and came at a greater cost. Therefore, careful monitoring is needed when antipsychotics are used and only after behavioral and other pharmacologic interventions fail.

Beneficiary Designations Are Easy and Flexible

When leaving a planned gift to Alzheimer’s Disease Research you may prefer to use the more flexible option of a beneficiary designation in an IRA or retirement plan, life insurance policy, or commercial annuity.

To make this type of gift with Alzheimer’s Disease Research, a BrightFocus Foundation program, contact your retirement plan administrator, insurance company, bank, or financial institution for a change-of-beneficiary form to designate the percentage you would like us to receive. Your gift will provide important research support until a cure is discovered. For more information, please call Charles Thomas at 1-301-556-9397 or visit brightfocus.org/plannedgiving.

Please share this newsletter with someone you know who might be interested in learning about some of the latest advancements in research to diagnose, prevent, treat, and cure Alzheimer’s disease. This newsletter is published by Alzheimer’s Disease Research, a program of BrightFocus

The information in Alzheimer’s Disease Research Review is provided as a public service and should not in any way substitute for the advice of a qualified health care professional, nor is it intended to constitute medical advice. BrightFocus Foundation does not endorse any medical product or therapy. Copies of the Alzheimer’s Disease Research Review are available upon request.