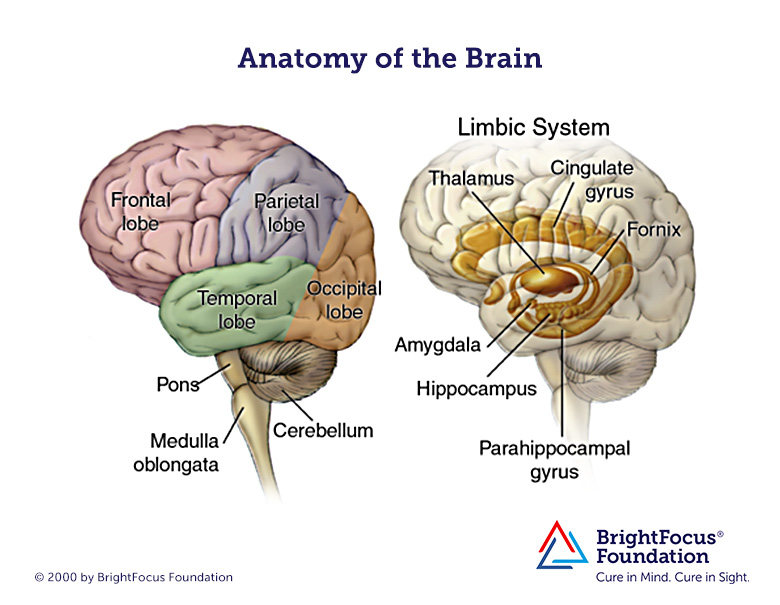 The image on the left is a side view of the outside of the brain, showing the major lobes (frontal, parietal, temporal and occipital) and the brain stem structures (pons, medulla oblongata, and cerebellum).

The image on the right is a side view showing the location of the limbic system inside the brain. The limbic system consists of a number of structures, including the fornix, hippocampus, cingulate gyrus, amygdala, the parahippocampal gyrus, and parts of the thalamus. The hippocampus is one of the first areas affected by Alzheimer's disease. As the disease progresses, damage extends throughout the lobes.

Amygdala: Limbic structure involved in many brain functions, including emotion, learning and memory. It is part of a system that processes "reflexive" emotions like fear and anxiety.

Fornix: An arch-like structure that connects the hippocampus to other parts of the limbic system.

Hippocampus: Plays a significant role in the formation of long-term memories.

Medulla Oblongata: Contains centers for the control of vital processes such as heart rate, respiration, blood pressure, and swallowing.

Limbic System: A group of interconnected structures that mediate emotions, learning and memory.

Parahippocampal Gyrus: An important connecting pathway of the limbic system.

Parietal Lobe: Receives and processes information about temperature, taste, touch, and movement coming from the rest of the body. Reading and arithmetic are also processed in this region.

Pons: Contains centers for the control of vital processes, including respiration and cardiovascular functions. It also is involved in the coordination of eye movements and balance.

Thalamus: A major relay station between the senses and the cortex (the outer layer of the brain consisting of the parietal, occipital, frontal and temporal lobes).