Neurons, highly organized brain cells, are characterized by specialized projections called dendrites and axons. The axon is the longest neuronal projection, where proteins move as if along a highway, in two different directions and at different speeds. Scientists have demonstrated that in the brain of persons affected by Alzheimer’s disease (AD), a disorder characterized by memory loss, this coordinated traffic pattern doesn’t work properly, so neurons become unhealthy and die. Our goal is to try to understand what is disrupting the neuronal traffic in AD brains, find a way to prevent it, and possibly find a treatment for AD.

The goal of my research is to provide a proof-of-concept that drugs aimed to preserve GGA3 function could be beneficial for the prevention and/or treatment of Alzheimer’s disease (AD). GGA3 is a member of the Golgi-localized, gamma adaptin ear-containing, ARF-binding (GGA) protein family.

The central hypothesis of this proposal is that GGA3 regulates the axonal trafficking of beta-secretase 1 (BACE1), the rate-limiting enzyme that initiates the formation of amyloid-beta (Aβ) peptide in AD. Thus, the depletion of GGA3 observed in AD brains is a leading candidate as a mechanism underlying BACE1 accumulation in peri-plaque dystrophic axons observed in AD brains.

Neurons are characterized by specialized projections called dendrites and axons. The axon is the longest neuronal projection where proteins move as if along a highway, in two different directions and at different speeds. Scientists demonstrated that in the brain of subjects affected by Alzheimer’s disease this coordinate traffic doesn’t work properly, so neurons become to be unhealthy and die. My recent findings demonstrate a loss of BACE1 polarization, leading to accumulation of BACE1 along GGA3 null hippocampal neuron axons, accompanied by a total disruption of BACE1 axonal trafficking. Nevertheless the role of GGA3 in BACE1 axonal polarized trafficking has never been studied before. For these reasons, my research goal is first to understand how GGA3 regulates BACE1 axonal trafficking in neurons.

It is widely accepted that Aβ plays an important role in axonal pathology. What still remains to be explored is how Aβ might impact axonal trafficking and how dynamic subcellular localization of BACE1 in neurons might affect the efficiency of amyloid precursor protein (APP) processing. Since we know that Aβ is capable of impairing axonal transport in neurons, we want to determine the effect of Aβ oligomers and familial Alzheimer’s mutations on GGA3 homeostasis and BACE1 axonal trafficking.

Our studies are highly innovative, given that the role of GGA3 in BACE1 polarized sorting regulation has never been studied in neurons before. Moreover, although GGA3 expression levels are highest in the brain, the function of GGA3 remains unknown. The identification of GGA3-mediated BACE1 axonal transport machinery would be extremely important to determine the extent to which GGA3-mediated regulation of BACE1 may represent a potential treatment for AD. 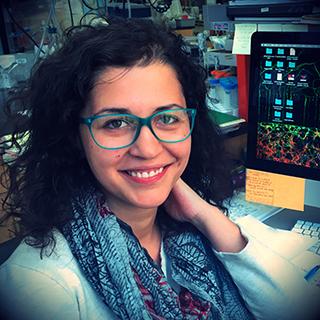