Learn about BrightFocus Foundation's support of Dementia Friendly America's grassroots movement to make cities and towns across the country welcoming places for those with dementia.

BrightFocus Foundation supports some of the most promising science in the world to end Alzheimer’s, and we widely share research findings with families impacted by this disease.

In 2015 we took this a step further by joining a broad coalition of nonprofit and business leaders to launch Dementia Friendly America. DFA is a national movement to create communities that better recognize, understand, and serve those Americans who are living with dementia, as well as their families and care partners.

Announced at last year’s White House Conference on Aging, this crosscutting program brings together the resources of public and private sector alike – from local government and law enforcement to business, banks, and health care.   For example, in communities pledging to become Dementia Friendly police officers, clergy members, retail clerks, public service workers, and many others receive sector-specific training to better serve and support this growing population. 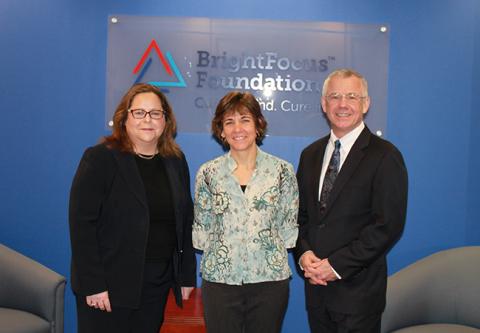 BrightFocus Foundation, headquartered in Montgomery County, Maryland, presented County Executive Ike Leggett with a certificate at the County’s Summit on Aging on December 3, 2015, welcoming the County into the network of local and state governments that have joined the DFA.

“Montgomery County will become a more committed, caring and compassionate community, and we are proud to be a part of this,” said Haller at the event.

On March 2, 2016, BrightFocus hosted an inaugural meeting for over two dozen community leaders in the county to collaborate on how each group would support the program with their expertise and resources.

Building on the success of a Minnesota model in which 34 communities implemented policies and programs for businesses and local government, Montgomery County is one of 8 Dementia Friendly communities, including Boston, Denver, and our neighbors in Prince George’s County, Maryland.

In the past year, 80 communities, ranging from cities to entire states, have contacted DFA organizers and are planning to announce their commitment to implementation in 2016.  Clearly, this public awareness program will have national reach and a positive impact on the lives of millions.

BrightFocus has long been investing in the innovative science needed to find a cure for Alzheimer’s.   Now, with Dementia Friendly America, we are proud to help support a grassroots movement to help make cities and towns across our country into truly welcoming places for those with dementia.

Written by Michael Buckley, BrightFocus Vice President for Public Affairs, who serves as the co-chair for the Communications and Outreach Committee for Dementia Friendly America.  He can be reached at Mbuckley@BrightFocus.org