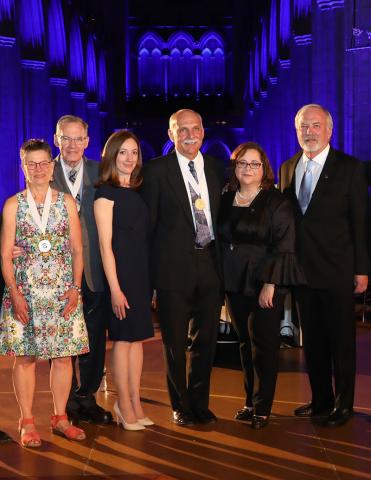 James Keach, Director, Producer, and Actor/PCH Films, received the BrightFocus Public Leadership Award, for his films exploring Alzheimer’s disease and the search for a cure.

Four scientists received the prestigious Helen Keller Prize for Vision Research, selected by a committee of the Helen Keller Foundation for Research and Education, for the scientists’ collaboration on the first human cancer suppression gene. They are:

Rachel Bennett, PhD, of Harvard Medical School, was recognized as an Emerging Researcher.

BrightFocus funds nearly 200 projects around the globe, a $40 million investment that the foundation believes will one day end these diseases. “These scientists are relentless in pursuing the untried, the unexpected, and the most promising paths toward cures,” says Haller.

BrightFocus Foundation is a premier source of private research funding to defeat Alzheimer’s, macular degeneration, and glaucoma.  We support bold, innovative science and share the latest research findings and best practices to empower families impacted by these diseases.   For more information, visit www.BrightFocus.org